Cattlemen are grouped into 10 different breeds of dog including the Flanders Cattlemen. They are large dogs, with a robust and compact body. Despite its size, it has agile and light movements.

They stand out for their large head, always characterized by that long mustache, beard and eyebrows that cover their eyes and give them a peculiar air. Do you want to know all the details about this impressive breed? Let’s go there!

Origin and History of the Flemish Boyero

The Flemish Boyero is a breed originating in the mountains of Flanders, sharing French and Belgian nationality. Its original name “bouvier” comes from “cowboy” or “cattle guardian”. The Flemish Boyero has traditionally been a highly versatile dog, used as a multi-task working dog. Of course as a cattle sheepdog, but also as a watchdog, protector, pack and companion dog.

The breed was used during the First World War as a messenger and as a transfer dog for ambulances. It practically disappeared during the conflict, since Flanders was one of the areas most devastated by the war. After the fight and thanks to the few surviving dogs, the Flemish Boyero was again driven until he recovered as a breed.

It was promoted and readjusted until the homogenization of the standards of the Flemish Boyero breed that we know today. Admittedly, it’s not too common a pet dog, they are seen more at show herding events and dog shows.

The Flanders Boyero is a large and robust dog, it can reach up to 45 kilos in some cases. Its long and rough fur conceals its shapes and gives its gait a peculiar air. The ears of the Flemish Boyero have usually been cut in the shape of a triangle following the indications of the FCI. Fortunately this practice is falling more and more into disuse.

It is a dog that is usually seen in dark, black or brown tones but can also be found with black and white mottling or gray or brown tones. 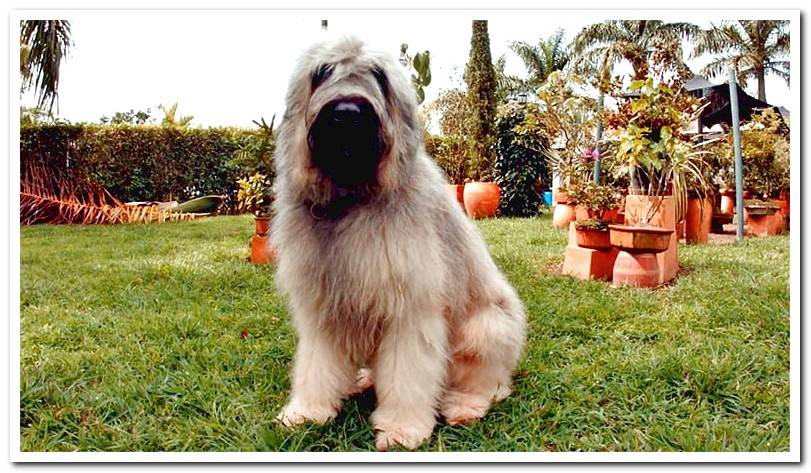 What is the character of a Flemish Boyero?

The Flemish Boyero he is a dog with a balanced character. Like almost all breeds, good puppy training is advised with special emphasis on the socialization of the dog. They are intelligent dogs and with good cognitive abilities, easy to understand, good memory and very predisposed to learn. Its character meets all the qualities necessary for fast and effective learning of the animal.

It is attributed a serious personality and we would almost say thoughtful. Given its origin, we are not surprised that it tends to manifest a territorial and protective character with its own. It is not a lonely dog, and although it may seem somewhat distant at times, it prefers company to being alone.

What care does a Flemish Boyero need?

The first thing we want to mention is the dog’s need for activity. The Flanders Boyero is a large, strong animal and although with a very well controlled energy, it is recommended that you live in large, open spaces and get more than an hour of exercise a day.

It is a clever and very insightful dog, but it is easily bored. It is advisable to propose challenges, tasks and exercise so that the dog does not get bored. In moments of rest and calm, cognitive dog games can be an excellent option.

Another fundamental breed-specific care is the care of their coat. The Flemish Boyero she has very characteristic hair that must be assiduously cared for. He has hard, long and somewhat scruffy hair in a double layer, the thicker, softer inner layer and the longer, rougher outer layer of hair. It is advisable to brush it periodically, not so much bathing it because it can cause damage to the hair and scalp.

You will have to take him to the hairdresser from time to time to have his dead hair removed. Keep in mind that despite the care, it is a dog that because of its long hair tends to get dirty, especially its legs and beard. For example, it is not the finest dog when it comes to drinking.

How is the health of the Flemish Boyero dog?

The Cattlemen of Flanders are healthy dogs and, like their character, their health is balanced and with little disease propensity. Some of the most common problems of these dogs are: