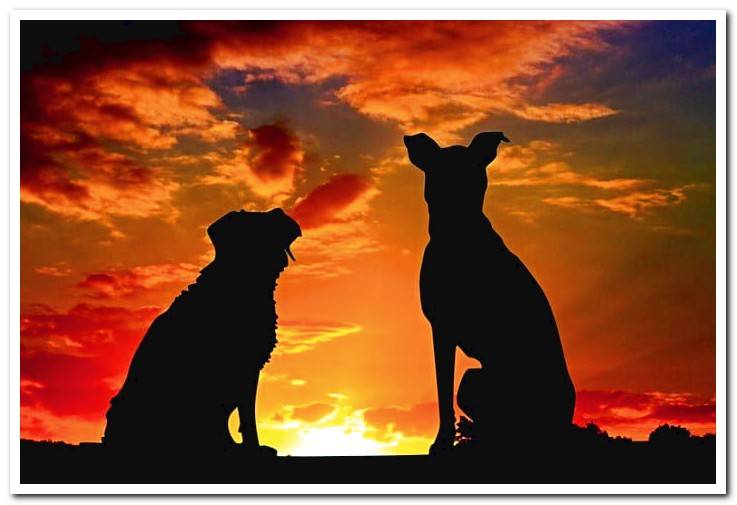 We are very used to recognizing dog breeds when we walk our furry in the park. Greyhounds, Chihuahuas, Labradors, Yorkshires, etc. However, there are about 400 recognized dog breeds today. Do you really think you know them all?

There are many very peculiar and exclusive dog breeds that are not as recognized as we are used to seeing. For this reason, today we present the most unknown dog breeds. You’ll be surprised!

If there is a curious dog par excellence, it is the Bedlington terrier. The shape of its skull, its pale color and its accumulation of hair on its legs, tip of the ears and head they give it a very sheep-like appearance.

Its name comes from the English mining town of Bedlington, where it originated. During their origins, these dogs were bred for racing and to catch animals. Likewise, they have also been recognized as good guard dogs.

In addition to needing enough daily exercise, this breed is calm and peaceful if it receives the necessary education as a puppy, and they weigh around 10 kg. It should be noted that these cute medium-sized dogs are not very friendly to cats.

The Caralburun or Turkish Pointer is native to Turkey and almost unknown in the rest of the world. The meaning of its name is “fork nose” and it is that there is more to see him to recognize that if something has special this dog is his muzzle.

This characteristic of the breed is due to a genetic deformation, and makes it show off a snout divided into two, as a match. In addition to that, the Catalburun also surprises for its reputation as a good hunter and great olfactory abilities.

Also, this medium to large dog, around 25 kg in adulthood, is very independent. However, if they are socialized from puppies they are ideal companions.

Is it a leopard or a dog? Despite its great resemblance to that great mammal for its dotted fur, this precious animal It is a canine of American origin with excellent abilities to climb trees, protect the home, lead cattle and hunt..

The Carahoula leopard dog, also known as the Leopard spotted dog, comes specifically from the city of Catahoula, in the state of Louisiana, hence its name. He is intelligent, very affectionate and expressive and needs a large dose of exercise.

This breed, traditionally bred as a farm dog, is large in size. However, it has a small number of copies, so it has not yet been recognized by the American Kennel Club.

The Xoloitzcuintle, Xolo or Mexican hairless dog is originally from Mexico, and its name comes from the Mexican god Xolotl. This breed is believed to be over 4,000 years old and to have existed during the Aztec, Toltec, and Colima cultures..

Its main characteristic is the absence of hair, as occurs with the Peruvian hairless dog, with whom it bears an extraordinary similarity. Currently we can find it in various sizes, toy, medium and standard.

As for their character, these dogs are ideal companion dogs, very happy, affectionate and playful, although somewhat shy. However, they require various skin care, since their bare skin makes them especially vulnerable to injury.

The Tibetan Mastiff or Mastiff of Tibet is a huge and furry breed of dog from Tibet. Traditionally this precious dog He was raised as support for the work that shepherds carried out in the Himalayas and as guardian of Tibetan monasteries.

Its imposing and elegant presence, together with its dense hair, makes this dog reminiscent of a lion. Thanks to this hair, which can be of different colors, this breed can withstand the cold winter months in these hostile places.

As for his temperament, the Tibet Bulldog is reserved, shy and independent. His noble expression reveals that he is a very kind dog. Also, it is an excellent watchdog. Lastly, this breed needs a lot of attention and exercise due to its enormous size and energy.

If you want to continue knowing curious and little-known dog breeds, don’t miss the list that we offer below.

This small and robust breed stands out for its monkey-like face. I
n addition to this particularity, it is a very familiar, playful and affectionate dog.

This dog is very rare to see on the European streets. It is of African origin and reserved, agile and fast nature.

This exotic breed is also African and very difficult to see outside of this continent. Its greatest uniqueness is that the dogs of this breed do not bark. Mind you, they make distinctive sounds when excited. Furthermore, they are very independent.

This breed of sheepdog is native to the Italian Alps. If there is something striking about this breed it is its long hair as with “dreadlocks” that protects it from the cold.

Related content  Should I hug my dog? Watch out!!

Descendant of the Arabian Greyhound, this breed was traditionally bred as a hunter of wolves and hares, although it later went on to live in the houses of American and English aristocrats given its particular beauty.

We present to you the winner of the last dog beauty contests, but not for being beautiful. Its peculiar crest on the head and its large ears have earned it the award for Ugliest dog in the world. This breed exists with and without hair and is also one of the rarest and most unknown.

Originally bred for puffin hunting, this Norwegian breed has 6 toes on each leg, the result of evolution to increase its grip on rocks. You can also turn your head back on your spine and stretch your legs 90 degrees.

This fox-looking dog for its pointy ears and furry, forward-curled tail is also not widely recognized. However, it is a breed that stands out for its agility.