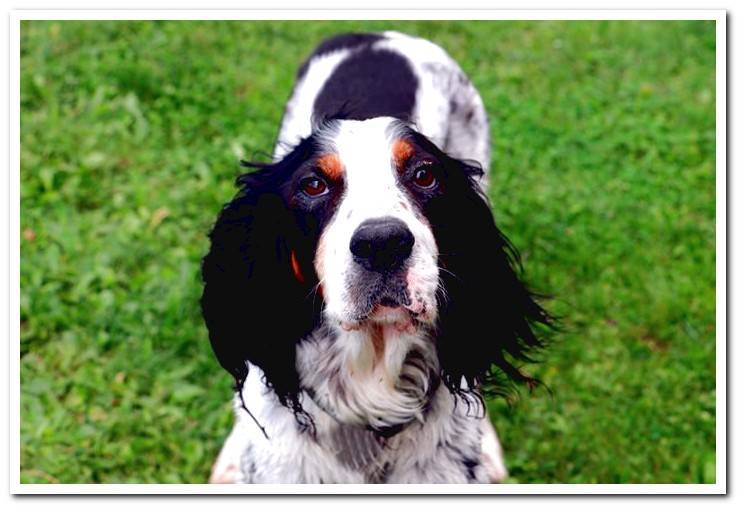 Among the hunting dog breeds, the English Setter stands out, in the feather hunting category. In addition to his ability to discover prey, he is an excellent companion dog thanks to its characteristics.

If you are thinking of acquiring an English Setter, you should first know what his temperament, behavior and what needs must be met. Do you want to learn more about this fabulous breed? We tell you… EVERYTHING!!

Origin of the English Setter

The English Setter is a dog whose antiquity is tracked 500 years ago. Most likely, it appeared as a result of cross between the Spanish Pointer and the English Springer Spaniel. It is a breed bred to hunt birds, as its objective was to remain still when locating them. The breed evolved to adapt to what breeders were looking for, after which its appearance was established as it is known today.

The work of establishing the final “version” of the Setter attributed to Edward Laverack, originally from England. During the 19th century, the breed migrated to the United States, where it quickly gained popularity.

Physical characteristics of the English Setter

The English Setter is an excellent show dog. In hunting work, his ability is compared to the Griffon of Korthals, thanks to the fact that he demonstrates great qualities in tracking and locating prey.

You are facing a medium-sized dog with a high head and elegant movements, as indicated by the breed standard registered with the International Cynological Federation (FCI). The Setter’s skull is oval and its head shows a dark truffle, either black or liver colored. The back is short and horizontal, it has rounded ribs, a deep chest and a wide hip.

The eyes are oval and the iris shows a bright dark tone, it varies between hazelnut and chestnut. As for the ears, they are low insertion and medium size, they fall on the skull forming soft folds and undulations. The Setter’s muzzle is long and well defined, the jaw does not protrude and closes in a scissor bite. The tail, for its part, is long, curved and with abundant fur.

The coat of the English Setter is one of its biggest attractions. It is long and silky to the touch, undulating without curling at the back of the head. In addition, it is longer behind the thighs and forelimbs, even reaching the ground. The mantle appears in a combination of a colored background with spots, varieties such as: black and white, orange and white, liver and white, tricolor, among others, are presented. 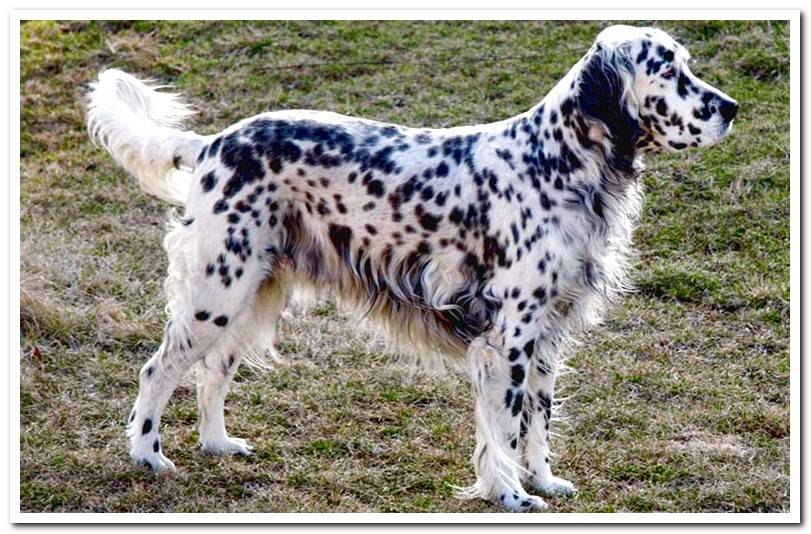 Character and personality of the English Setter

The Setter is an excellent hunting dog, but it also has great qualities as a life companion and companion dog.

It is a friendly and affable dog, it is very affectionate and attentive with its owners. Its friendly personality makes it an excellent dog to live with other pets and children, because the English Setter gets along well with others.

Disciplined and elegant, training him is not difficult, thanks to his intelligence and his tendency to please. Setter puppies are curious, so you need to keep an eye on them to avoid getting hurt.

You will not have problems to train him and he will be an excellent companion dog with magnificent qualities, such as a good sense of smell. Also, his hunting job prevents him from being very barking.

Necessary care for the English Setter

As in other breeds, socialization and training are recommended from puppies. Puppies’ curiosity must be channeled, as well as the use of their sense of smell, as they love to follow trails. Without training, this can lead you to follow your instincts regardless of the consequences.

Scolding emotionally affects the Setter, so it is best to educate him using positive reinforcement. Have some snacks on hand to reward him, not forgetting the caresses and kind words when he does what you ask. Leaving this aside, it is very easy to train it.

Although they adapt well to living together in flats, their energetic personality requires a house with a garden or a life in the rural environment, where they will happily enjoy the freedom of running among nature. Before you are two years old, it is recommended that you only walk it with walks, since its bones are not yet forming and they lack the necessary strength for other activities.

From the age of two, the English Setter It is the perfect dog to go jogging or cycling This will allow you to exercise as you should. Don’t forget the leash or bib to prevent your instincts from guiding you towards smaller animals.

After the daily race or walk, she enjoys staying at home and participating in family life, where she shows a calm and very friendly attitude.

Common diseases of the English Setter

With veterinary visits, exercise and quality food, the Setter is a healthy dog. However, the breed is prone to some diseases such as: