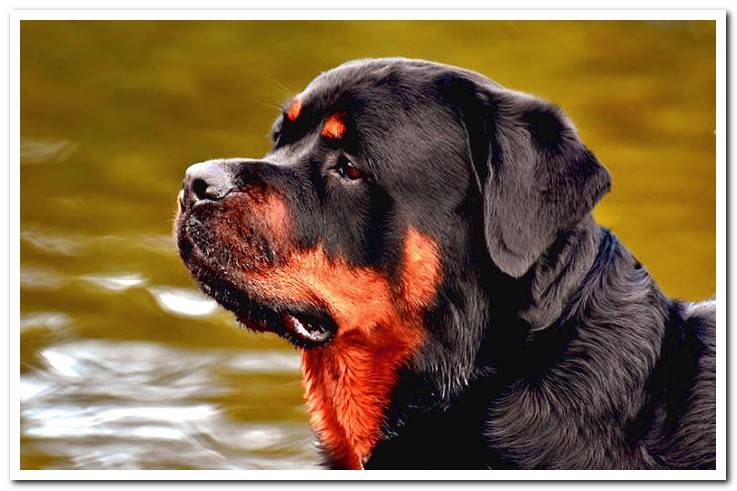 Table of Contents show
1. Rottweiler Features
2. How is the temperament of a Rottweiler?
3. The care that every Rottweiler needs
4. Breed history
5. Rottweiler dog trivia
5.1. Related Articles:

The Rottweiler is one of the most popular breeds in the world. His appearance is unique, as is his expressive gaze and his great skills as a guardian. Despite an undeserved reputation for violence, they are loving and calm at home.

Furthermore, due to their sensitivity and obedience, they can be trained as police or assistance dogs. Let’s see in detail what are the characteristics of this beautiful breed and what care is required.

These dogs have an imposing body, very robust and athletic. They are neither too heavy nor too light, demonstrating great vigor and power out of the ordinary. The neck is muscular, somewhat arched and without dewlap. The loin is strong and deep, while its chest is broad and well developed.

The legs end in round feet, with tight toes. The tail, thick and quite long, can exceed the level of the hock. There are two lines with different textures. The American variety is taller and more stylized; they are also heavier specimens. The European line has less height and a more compact body.

On the other hand, they have a wide and short skull. In the alert position, wrinkles usually appear on his forehead. The muzzle is straight and rather short. The truffle is wide and not very rounded, while its jaws are powerful. The eyes are almond-shaped and dark brown in color. The ears are triangular and drooping on either side of the head.

Rottweiler hair is double-layered, fine on the innermost and very thick and tight on the surface. In the hind limbs the coat is more profuse. The typical color of the breed is black with tan markings on the cheeks, muzzle, chest, legs and tail. Another standardized feature of the breed is a brown spot on the brow. 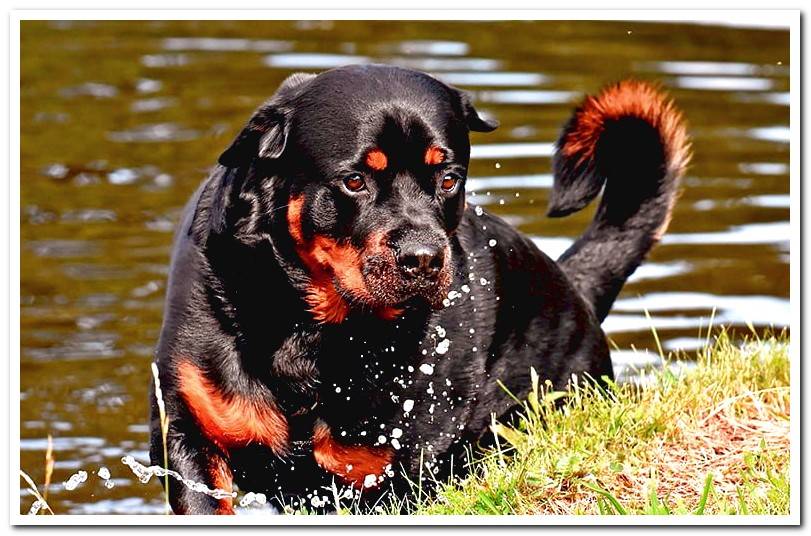 How is the temperament of a Rottweiler?

When well educated, Rottweilers are reliable companions and very attached to their family. It is common for them to follow their favorite person throughout the house. A female is the best option for households with children Because they integrate more easily and tend to be more affectionate.

In any case, they will get along better with older children. Despite this, you should always monitor their games and interactions. In this breed it is essential to control its innate tendency to push, a behavior that derives from the way in which they handled cattle in their origins.

Their protective temperament makes them suspicious of strangers. If they are well socialized, they are stable in new situations or people. They are also great guard dogs that will defend their family at all costs.

It’s necessary that limit your territorial instincts since the first day. Rottweilers require strong leadership, consistency in education, and firm but nonviolent treatment. Never mistreat a Rottweiler, as you will lose their respect. What’s more, you can try to become the leader of the pack, which will enhance your aggressiveness.

Related content  How to Educate a Puppy - Complete Beginner's Guide

Also, do not leave them isolated in a patio for long periods of time, as these dogs need to be in contact with their family. If they are alone they can become shy or sullen, something you should avoid. If they get bored, they can show destructive behaviors.

When you live with an adult Rottweiler, there will be no problem adopting a second dog as long as they are both properly socialized. It is recommended, however, that they are not of the same sex.

The care that every Rottweiler needs

Raised as working dogs, the Rottweilers They need a lot of daily activity. Establishing a workout and exercise routine will help keep them healthy and balanced.. Despite its energy, taking a daily 20-minute walk will be enough for your well-being and the dog will be calmer at home.

They are used to being with people, so sharing games or playing sports is a good way to strengthen this relationship. The most recommended sports for these big guys are Agility, Obedience, Tracking and swimming.

During the trips to the outside you must always take them well tied and with a muzzle, because in Spain they are considered as a potentially dangerous breed (PPP). Also monitors interactions with strange dogs ; they should be done very tactfully, especially if they are male.

Brushing should be weekly. Do it firmly to distribute the natural fat of your hair well. In the molting season (twice a year) it will be necessary to intensify this maintenance to avoid the accumulation of hairs in the home. Bathrooms are only indicated when they are really dirty.

The ancestors of the first
Rottweilers traveled with the Roman legions and were in charge of taking care of the cattle that fed the troops. In this way, the variety spread throughout Europe. In Rottweil, southern Germany, it was mixed with indigenous specimens to give rise to the Rottweiler.

In the Middle Ages these dogs were the right hand of butchers. Due to their vigor, they were perfect for keeping cattle at bay or pulling carts. They were also good guard dogs. In an age when travel was fraught with danger, it was a good deterrent to assailants. At the beginning of the 20th century they became the favorites of the security forces.

The Rottweiler’s appearance has always inspired respect and trust. In the Middle Ages, merchants traveling with a Rottweiler they tied the bag with the money raised during the markets in the neck of these dogs It was considered to be the safest place.

His courage and audacity did not go unnoticed in the First and Second World Wars either. In addition to caring for the camps and pulling carts with the wounded, they were used to infiltrate enemy territory.