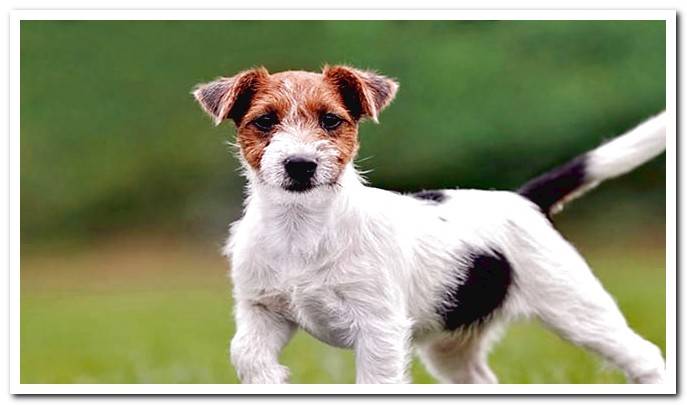 The Jack Russell Terrier was bred in England some two hundred years ago solely and exclusively to participate in traditional fox hunting. The existence of this breed is due to Jack Russell, a reverend fond of hunting who raised it from specimens of white Fox Terriers.

Thus was born this daring and athletic breed that soon became highly successful due to characteristics such as speed, intelligence and tracking skills. It is a very active, independent and intelligent dog but with a charming and affectionate character.

How is the character of the Jack Russell Terrier?

It’s amazing how much personality and energy can fit in the small body of the Jack Russell Terrier. This little boy is affectionate, faithful and fun, he knows how to enjoy life. He is always ready for anything and eager for action. Of course, it is not the best companion that a person who loves tranquility can find.

The Jack Russell Terrier is always on the go. Agile and athletic, it is capable of jumping up to five times its height, being very suitable to stand out in many canine sports.

Of a friendly nature towards people, even with strangers, he can be aggressive towards other dogs and any animal that he may consider as prey, including cats. His intrepid nature causes him to have no qualms about dealing with dogs larger than himself.

Always cheerful and jovial, it is a great playmate for older children, although due to its unruly nature it can overwhelm the little ones. The Jack Russell Terrier is a wonderful family dog ​​if we can provide him with the care and education he needs.

Characteristics of the Jack Russell breed

The Jack Russell Terrier belongs to the small size dog breeds with a height at the withers between 27 and 35 cm and an approximate weight of 6 kg. in his adulthood.

Its body is robust and compact, longer than it is tall, with short but strong limbs. Its head is flattened, with a long snout and a dark nose.

Their ears, dropped in a “V” shape, were purposely designed this way to prevent them from getting dirty during hunting days. But the most striking feature of the Jack Russell Terrier’s physique is his intense gaze, which very well reflects his energetic and alert character.

Her hair can be of two types: smooth and soft or hard, but never curly or wavy. In both cases there is a double layer with a thick texture. The hair color is eminently white, originally thought so that hunters could distinguish dogs from foxes during hunting days, although they may have black or brown markings, and there are also many tricolor specimens (white, black and brown).

Although its origin is the same, we should not confuse the Jack Russell Terrier with the Parson Russell Terrier. The former is easily recognizable by its shorter legs, better adapted for crawling, while the latter has longer limbs for running behind horses. 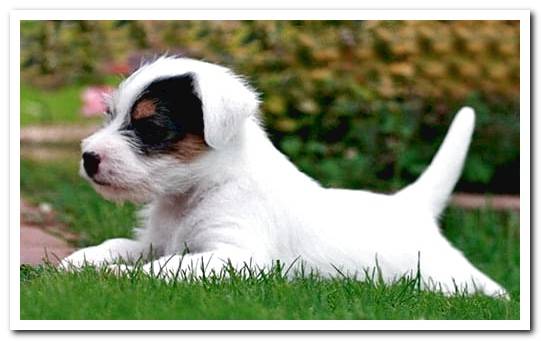 How to educate a Jack Russell Terrier?

Despite its keen intelligence, it is not always easy to train a Jack Russell Terrier. It is a job that requires time, patience and a good dose of humor.

With our Jack Russell it is essential to establish a daily workout routine Although the sessions should be brief and not too hard, if we want to maintain their interest and desire to learn. Monotonous and repetitive exercises will bore you.

Jack Russell expects us to be firm and consistent, though not overly harsh since, just as he responds very well to positive stimulation methods, he becomes incredibly stubborn if he considers that we are treating him poorly. Finding balance can take some time but once achieved there are no limits to what a Jack Russell can learn.

The Jack Russell Terrier needs a fenced yard or patio where he can run, jump, and burn some of his abundant energy. This space should be safe and well fenced because, among other skills, this dog is a true leak expert.

You have to go for a walk with him daily, with walks of at least half an hour and always on a leash, since on the least occasion the Jack Russell Terrier will go out at full speed to chase cats, cars, bicycles and anything he sees on the move. It is practically impossible for him to suppress this hunting instinct. These walks can be completed with vigorous play sessions at home.

The Jack Russell coat needs weekly brushing to remove fallen or dead hair. If we brush him regularly and correctly, he will rarely need a bath. And it is better that way, because your skin is very sensitive and easily irritated.

The Jack Russell Terrier is one of the longest-running breeds in existence. Well cared for and fed, this dog can live up to 15 years or more.