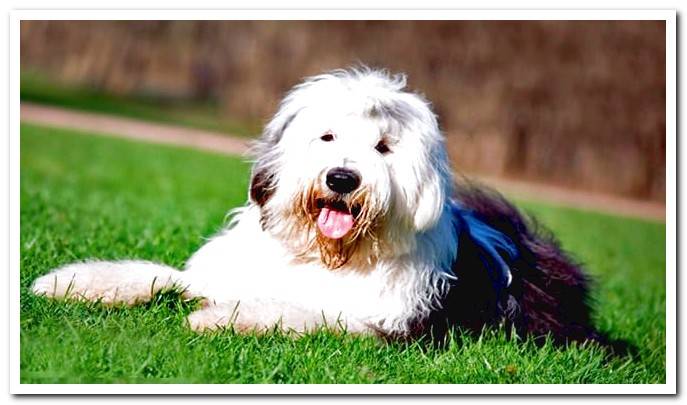 The Bobtail dog also known as Old English Shepdog or English Sheepdog, is a large and athletic dog, unmistakable in appearance thanks to its woolly coat and physical characteristics.

Intelligent and endowed with great adaptability, the Bobtail still retains a good part of his character as a sheepdog, which is why he usually excels in dog competitions of various kinds, especially those of obedience, agility and herding.

From Dogsis we want to show you all the useful information about this breed, from its curiosities to the care it needs to keep it healthy and happy. Ready?

What is the character of a Bobtail dog?

This playful and loving dog has a great time frolicking with his family and playing with the children. A good part of this kind and happy temperament is due to its slow maturation process, which makes it behave like a puppy until around three years of life. In any case, his behavior is not too serious as an adult.

Endowed with great intelligence, the Bobtail learns very quickly and is always looking for something interesting and fun to do, thanks to its friendly and family character. Inactivity does not go with him, he needs continuous physical exercise and he hates spending long periods of time in solitude. Versatility is another of its virtues, since it is a dog capable of performing numerous tasks.

A well-bred and trained Bobtail is a good-natured and friendly dog, an excellent companion for children (so much so that he has been baptized with the nickname of nanny-dog or nanny-dog) and very protective of his own, although not strictly speaking it is a good watchdog.

The Bobtail dog is large, both in size and wingspan. Its height at the withers is around 60-65 cm and its weight at adulthood ranges from 30 to 40 kg, always somewhat less in females.

The Bobtail’s body is short and chubby, looking less athletic. However, under this appearance hides a muscular and vital dog. On his head stands out his large black truffle with large holes and his intense and awake gaze. The obars always very hairy, they are small and drooping.

His characteristic short tail is a legacy of his origins as a sheep herder, a holdover from the time when ranchers cut their dogs’ tails to prevent wolves and other predators from plucking it.

If you like big, furry dogs, the Bobtail is definitely a good choice. His fur coat is made up of two layers: the rougher exterior and the softer interior.

Her hair is thick, long and straight but she tangles too easily. The hair colors include various shades of gray, merle blue and brown, always mixed with white spots of different shapes and sizes.

The Bobtail constantly sheds hair and drools all the time, so it is not exactly the most ideal companion for order and cleaning maniacs.

If you like complicated challenges, here is one: train a Bobtail. Proper training is essential in this breed, and you should start with it as soon as possible, as puppies are often rowdy, stubborn, and rebellious. The key is to be very patient, carry out daily training sessions and never give in to your dog’s whims.

Parallel to the training, we must also work on the early socialization of our Bobtail in order to avoid inappropriate behaviors when he reaches adulthood. 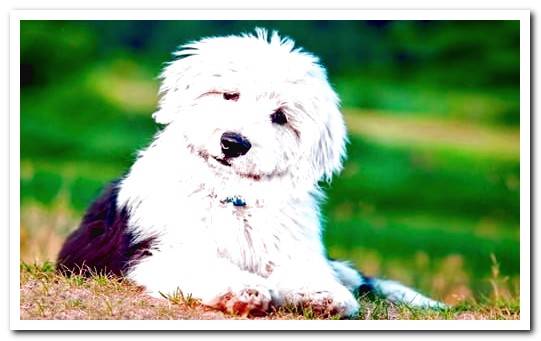 Due to its origins as a working dog, the Bobtail cannot live without intense physical activity, so an hour or two of exercise should be part of its daily routine.

However, it is advisable to reduce this exercise time in summer, since the dense and warm coat of the Bobtail tends to raise its temperature more than is desirable, which can cause respiratory problems, symptoms of heat stroke and even dehydration.

Of course, this dog’s need for exercise varies by age. Puppies possess almost inexhaustible energy, while older dogs prefer to lie down for most of the day and need a convincing stimulus to get moving.

Bobtail hair is very difficult to maintain and sometimes there is no other choice but to go to a professional hairdresser to help us in this task. Brushing must be daily and meticulous, as your hair easily tangles.

In addition, the Bontail molts all year round and accumulates large amounts of dead hair. On the other hand, it is advisable to wash the hair around the mouth regularly, which ends up turning an ugly yellow color due to constant drooling.

The average life of the Bobtail, a healthy, vigorous dog with few health problems, is around 12 years.