Seborrhea is a condition characterized by the presence of scales on the dog’s body. These can be dry or greasy. Furthermore, a distinction is made between primary and secondary seborrhea.

Primary seborrhea is incurable, but treatment may be prescribed to keep it under control. Secondary seborrhea occurs as a symptom of another disease that will have to be treated for it to go away. Do you want to know more details about seborrhea in dogs? Let’s go there.

Seborrhea is a pathological increase in the secretion of the sebaceous glands of the skin. The epidermis, which is the outermost layer of the skin, and the hair follicles, which are the producers of hair, originate what by its appearance we know as scales. The scales can be dry and gray or whitish, similar to dandruff. But flakes with oily or oily texture and yellowish color are also produced.

In this case they are due to an excess of sebum generated by the sebaceous glands. They give off a bad smell. The dry scales, precisely for this characteristic, are removed with relative ease from the dog’s body. On the contrary, the fats will come off with difficulty because they remain attached to the hair.

In addition, in seborrhea fat, a plugging of the hair follicles can occur, which, in some cases, it ends up causing an infection. This is called folliculitis. If the accumulation is located in the ear canals, it causes a otitis ceruminosa. There are two different diseases, which are primary and secondary seborrhea.

Seborrhea is not contagious either between dogs or between animals of other species, such as from dog to human. However, if it can be hereditary, that is, if a dog suffers from primary seborrhea, it is possible that its puppies also suffer from it. 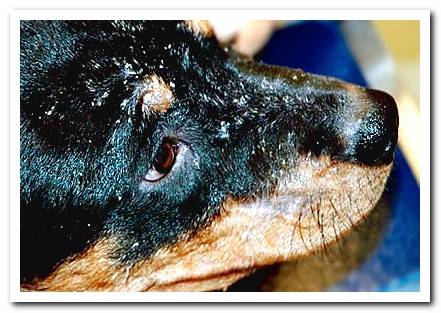 It is a relatively frequent pathology. It is even more common in young specimens and in certain breeds such as the American Cocker Spaniel, Springer spaniel, West Highland white terrier, Basset hound, Irish Setter, German Shepherd, Labrador or Shar pei.

In affected dogs we will look at the characteristic scales. These can be dry, oily or both types at the same time. It is more common to see scales in the area of ​​the elbows, hocks, the front region of the neck up to the chest or the ears.

What is the treatment for primary seborrhea?

Unfortunately, primary seborrhea is an incurable disorder. But it is possible to treat it and the objective is to control the production of scales. The treatment includes the application of shampoos or lotions. For sale are different products with antiseborrheic effect. The vet will indicate the most suitable one and the necessary application guideline.

When the flaking is dry and light, the treatment focuses on hydrating the skin. Hypoallergenic, moisturizing shampoos or lotions are used, without additives, which guarantees their frequent use without problems. In more serious cases, the shampoo must include other ingredients, as the vet will indicate.

If seborrhea is fat, shampoos are also used, but in their composition the inclusion of active ingredients such as benzoyl peroxide is recommended. These help remove sticky scales. If folliculitis or any other infection is detected at the skin level, it is treated with oral antibiotics. If scratching is present, corticosteroids may be required.

In this case, seborrhea is related to the presence of another disease with cutaneous symptoms that is the cause. Among the pathologies linked to secondary seborrhea, the following stand out:

What is the treatment for secondary seborrhea?

The guidelines given to combat or control primary seborrhea can also be followed in cases of secondary seborrhea. But it is essential that the vet identify the primary cause that triggered it.

This is discovering the disease behind the production of scales. Putting a treatment against it, the secondary seborrhea should disappear. If it does not, we could be facing primary seborrhea.

With therapeutic shampoos we mean those that show activity against some pathology. In the case of seborrhea, the shampoos recommended for treatment should be applied to the entire body of the dog. They are allowed to act a minimum of fifteen minutes.

Before, you can bathe the dog with his usual shampoo and warm water. We will rinse it completely before using the antiseborrheic shampoo. After it, a good rinse and drying is important.

As a complement to seborrhea treatment, it seems that adding some supplements to food has a beneficial effect. Specifically, they are used those containing essential fatty acids derived from fish oil. Always according to veterinary recommendation.