In this article we tell you about the Bichón Frisé, a breed of dog that has become very popular thanks to its excellent temperamental qualities.

For centuries, it became the preferred pet of royalty and nobility in general. Later he would lose his status to become the faithful and friendly companion of street musicians and artists and circuses, becoming a dog of the people.

Like other races, the Bichón Frisé was about to disappear, but the famed intelligence of the animal and the providential hand of some breeders, avoided it in time.

Today, we can continue enjoying the company of this adorable and friendly animal, which delights children and adults.

The Bichon Frize is a small dog, with a curly coat of 7 to 10 cm. long and in the form of a corkscrew and white, (the only color recognized by the International Cynological Federation for this breed); although some specimens have it black or brown.

Some federations admit a slight chestnut shade on the coat, as long as it does not exceed 10% of the total.

Its height ranges from 23 to 30 cm. for males and between 24 and 27 cm. in females.
Your weight, once an adult, round between 3 and 4 kilos, which rarely exceeds.

Its life cycle can easily reach 14 years of life, depending of course on the quality of life it has.

The Bichon Frisé is an attractive, intelligent, happy and quite playful, but without being nervous. He has round, vivacious eyes that almost seem to read thoughts when they look at you directly.

It is ideal as a companion dog and adapts very well to any type of home.

According to the International Cynological Federation, the Bichón Frisé is classified within group 9, and section number 1 (Bichones and other similar breeds).

A little history about the Bichón Frisé breed

The precise origin of the Bichón Frisé is not known. The possibility is being considered that it is the result of the crossing of the old Barbet, a larger spaniel, with other breeds of white-coated lapdogs.

The term itself: Bichon, is a derivation of “barbichon ”, Diminutive of barbet in French.
The Burgundy Bichon, the Maltese and the Habanero belong to the same family as the Bichón Frisé.

What we know for sure is that they all come from the Mediterranean Basin.

Due to its charm, whiteness and small size, the Bichón Frisé soon became the favorite mascot of kings and nobles, from the 16th century on; especially during the reigns of Francisco I of France and Enrique III of England.

The latter monarch carried his bichons everywhere in a basket made for this purpose and hung from his own neck.

In the Spanish royal houses, the Bichón Frisé was no less successful than in the rest of the European courts. Even appears reflected in some Goya paintings, as a companion to some ladies of the nobility.

However, at the end of the 19th century, along with the social and ideological changes of this century, it was losing its status as “aristocrat dog ”Until he became the favorite mascot of street musicians and artists and circus performers.

Already in the 20th century, the Bichón Frisé was on the verge of extinction. If it had not been for its appreciated qualities and the intervention of French breeders, it is very likely that today we could not enjoy the invaluable company of this breed of dog.

The FCI ratified it the official standard in 2016, although this breed was already recognized as such in 1956.

Temperament and personality of the Bichón Frisé breed

The Bichón Frisé is an intelligent dog, especially cheerful, playful, without being nervous, but above all, very much in need of company.

Abhor loneliness; although he also likes enjoy your own space and of a certain degree of independence.

Despite being a small dog, he feels relaxed in the presence of children and enjoys participating in his games wit
hout being scared by the possible fuss.

His intelligence requires a good and correct imprinting, as well as a scrupulous education; so that it is channeled in the best possible way. 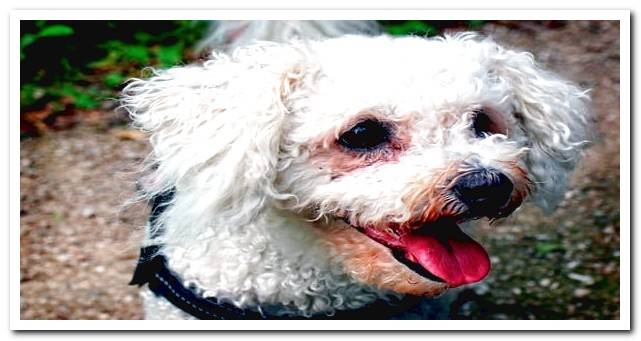 Although it is true that the Bichón Frisé is characterized by enjoying fairly good general health, they can suffer from some ailments. Especially if we don’t take the proper measures. Some of them are:

They are mainly produced due to an excess of protein in the diet and the abuse of some minerals, such as phosphorus or magnesium. It can also be influenced by not taking them out as often as necessary, excessively prolonging the time intervals between one urination and the next.

To avoid it, nothing better than a controlled diet and protein mainly, but without incurring an excess or decompensation to avoid other types of disorders. Daily and moderate exercise is also recommended. Games and walks (frequent, without being excessively long), are ideal for the breed.

They are more frequent in puppies and adults under 6 years old. Regular check-ups and good eye care and hygiene can help us prevent or treat them and, if they occur, resort to surgery if necessary.

Unfortunately, the Bichon Frize has a particular tendency to lose some teeth during old age, something quite common in other breeds. In many cases it is genetic, but good oral care and a correct diet can minimize the problem and help us delay tooth loss.

The Bichón Frisé has a special sensitivity to flea bites; this being the most frequent cause of allergy in this breed.
Correct hygiene, frequent washing and brushing, as well as the use of the anti-parasitic collar and pipette, are the best preventive measure in these cases.

It is a frequent pathology in small dogs. It consists of the abnormal displacement of the patella, especially in the hind legs. It is not always a problem that prevents the dog from leading a normal life; Although it can cause pain and actually impair their ability to move.

They are usually a consequence of other associated eye problems (conjunctivitis, infections, cataracts), derived in turn from poor hygiene. They can also be due to the lashes growing inward. Allergy is another trigger, so we must be alert to also rule out other covert pathologies.
In addition, the Bichón Frisé has somewhat small tear ducts and is more likely to block.

Some specimens of Bichón Frisé may show a certain propensity to manifest some annoying symptoms, after administration of the vaccines. Facial swelling, apathy, hives or lethargy, would be some of them. However, they generally remit within a short time and rarely degenerate into more severe complications.

The Bichon, like any other dog, needs proper care for its characteristics and breed.

Diet, exercise and proper hygiene are essential. It tends to think that, being a small dog, don’t have the same exercise needs and yet it is the other way around.

The Bichon is a very active dog by nature and needs a good dose of play and walking to stay healthy and in a good mood.

Did you know……? Is there a false myth that the Bichon hardly loses hair and that, for this same reason, it does not need to be washed and brushed as frequently as other dog breeds.

What really happens is that the dead hair of the Bichón Frisé does not come off in the same way as in straight-haired dogs, but it gets trapped in the outer layer, becoming increasingly entangled, so that if it is not removed with certain frequency, his cloak will become less and less healthy and matted, being able to degenerate into serious skin conditions.

For this reason it is necessary to brush regularly (at least twice a week), trying to undo the knots that may have formed in her hair, as well as cutting her hair and bathing it regularly.

It is recommended to take it to the dog groomer; at least the first few times, to observe the procedure and to be able to do it ourselves later, if we so wish.

How to educate and train the dog Bichón Frisé

The Bichon Frize is a relatively easy dog ​​to educate and socialize; mainly due to his intelligence and desire to please his master. He loves being the center of attention and is very bad at being alone.

As with the rest of the races, the ideal formula to educate him is a correct imprinting and to promote behavior patterns in a systematic, progressive and regular way; using positive reinforcement as a skeleton key.

It is convenient to habituate him as a puppy to remain in the training boxes, so that he gets used to being only for longer and longer periods of time.

In this way, he will take our absence better when we cannot take him somewhere or have to make a trip without him.

But we should not leave him alone for long periods of time. You can accuse him in the form of depression, trauma or stress. If we cannot spend enough time with our dog, it is better not to have it.

Attending a training course with him can help us a lot in the learning process and it is very possible that it will help us a new perspective of canine psychology.
It will also help us improve communication with our furry friend, helping us provide him with the best tutelage, while obtaining the best from his company.