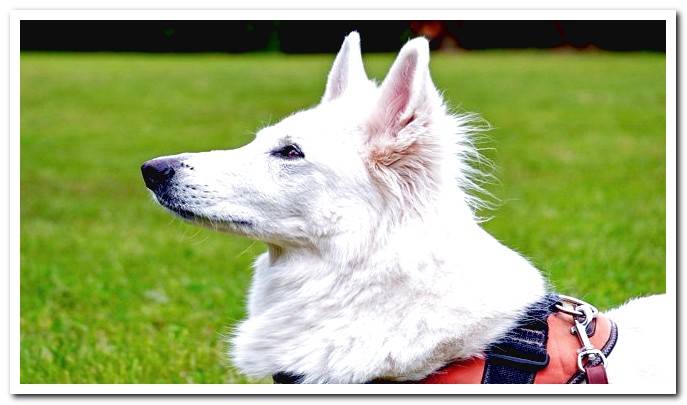 Calm, observant and very cunning as well as affectionate and super sociable, so we could summarize the Swiss Shepherd in a few words, however, we think that learning more about the breed will help you to know and take better care of it.

That is why we have compiled all this information for you, so that you know its origins, its characteristics, its tastes and also its weak points. Shall we start?

Origin of the Swiss Shepherd breed

Despite being known as Swiss Shepherd, the official name that the International Cynological Federation (federation in charge of the study of canine and domestic dogs) gives it is the one of Swiss White Shepherd o Berfer Blanc Suisse and Weisser Schweizer Schäferhund, respectively in French and German.

It is a breed that comes, as its name suggests, from Switzerland and has been baptized with names that range from white shepherd to American shepherd, even being known as a white German shepherd.

Due to its color, it has been believed that it is an albino dog. However, the white of their fur is due to generic factors, in addition to being known that albino dogs tend to have pale skin and light bluish eyes, an aspect that rarely happens in this breed.

This characteristic has put in clear inferiority with his relative the German shepherd, more specifically in the Germany of the 30s, where it was thought that the white coat of the Swiss Shepherd damaged the breed, even going so far as to be considered an aberration after the Second World War.

Although a similar path was followed in the United States, this breed owes its current existence to a caretaker native to the North American country. Specifically, Ágata Burch, who went to live in Switzerland, taking with her a white shepherd who, along with other imported white shepherds, increased the breeding of this breed.

Years later, the Swiss Canine Society – He ended up recognizing this animal, granting it the label of “nationality” of the country. 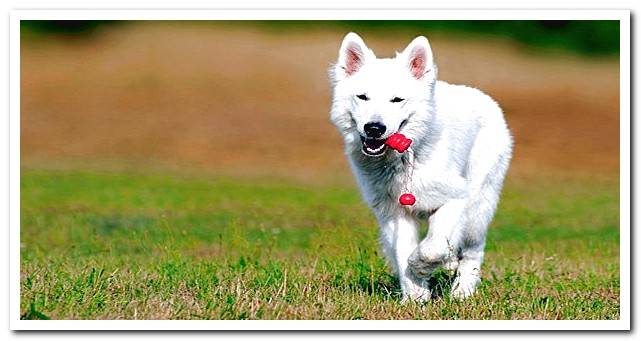 How is a Swiss Shepherd dog?

The Swiss White Shepherd is a breed of medium size, with a muscular body and strong strength.

With regard to weight, we usually find specimens that ranging from 30 to 40 kilos in the case of males and from 25 to 35 kilos when we refer to the females of the breed.

As is understandable by the origin of this breed, we are facing a dog that bears a great similarity to the German shepherd except for the coat, despite sharing a similar density.

A difference that is evident, being the coat of the Swiss equally dense and of a color that varies between the white and cream tones.

Regarding its general appearance, we can say that genetically it is very similar to the German Shepherd, except that, in the case of the Swiss Shepherd, its coat is predominantly white or cream colored.

Its limbs are vigorous and thin, it has a slender head and triangular ears. Its coat is double, abundant, smooth and rough.

In reference to the eyes, generally the White Swiss Shepherds usually have a quite narrow color variety, finding us brown or dark brown colors as a variety.

We are before a race whose head has a triangular wedge shape and a clear pointed elevation. In addition, it is usually vigorous and slender, being properly proportioned with the rest of the body.

In relation to the stop (angle or depression that is created between the frontal bone and the nasal bone), it is clearly recognizable and visible, although it is not excessively pronounced as it happens in other races.

With regard to its nose, we generally find a breed in which the black truffle.

However, sometimes we find what is commonly known as “snow nose”, A loss of pigmentation (generally seasonal and with greater incidence in winter), giving rise to a partial pink color.

It has a jaw with a total of 42 teeth and a correct configuration. As well as thin, tight and black lips and large ears and in a clear and more than visible pointed elevation.

If we talk about the rump (part of the dog that goes from the tail to the kidneys) we usually find a slightly sloping or sloping area.

Is about a race of curved chest, a chest not too big and flanks that are usually aligned at the height of the belly.

Finally, in reference to the tail, we find a variety in the form of a saber. Low insertion that reaches, at least, up to the hock (part of the leg that is behind the knee).

In the fallen or hanging state when the dog is at rest, it becomes lifted when the dog enters the action position. Although, it is never above the margin of the dog’s back.

Its tail is shaped like a saber, being low insertion and must at least reach the hock. When at rest, the dog carries it hanging, which is not an obstacle so that the distal third can curl upwards somewhat.

When it comes into action it will always lift it, but never above the margin of the back. 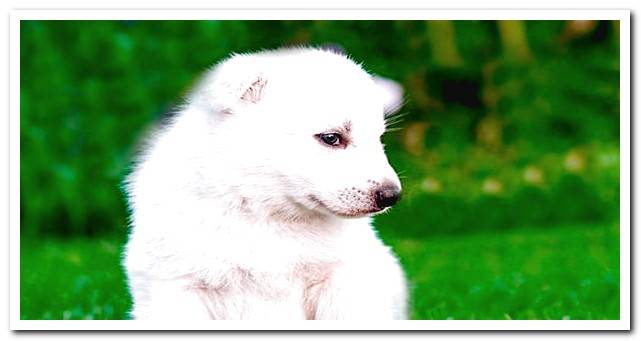 How is their behavior and temperament?

We find ourselves with a generally calm race as well as cunning and awake. Also, it is a breed extremely caring and caring to what is around him, and more specifically with regard to his master and family, becoming a dog that is constantly watching what happens and, therefore, enormously loyal and loving.

It is an ideal dog for families or environments where there are small children, as well as some other breed of dog, coming to be able to live in a really sociable way with other animal species.

Of course, as long as there has been a job of training and correctness previously.

It is a breed that stands out for having enormous energy, as well as excessive curiosity. However, in environments that are not known to them, we find an extremely cautious and cautious breed.

We are facing a dog that is normally easy to train, due to its high degree of obedience.

The Swiss Shepherd is a dog that, in freedom, needs a feeling of belonging and
experience in a pack, so if we want it to have proper growth and training, the first thing we should know is that it needs company.

It is highly unlikely that the process is correct if this dog lives long periods of solitude or feels ignored.

Although it is a highly loyal dog and with an excellent aptitude to learn, for the training it is important make him understand that he will not be the leader and demonstrate some control over it.

Of course, avoiding all kinds of harassment, excessive or hard treatment and opting for prize-oriented training. We are facing a dog that is as helpful and attentive as it is sensitive, so negative behavior can lead to behavioral problems in the long run.

You need to know elementary rules such as the possibility or impossibility of urinating in specific places or times.

This is a breed that, despite being medium in size, has a small bladder in comparison, so it is crucial that you learn urination patterns or routines early.

To improve their relationship and experience with strangers, it is very important that this breed becomes socialized from very young ages.

In this way, we will have a dog make it more open to interrelation with people unknown but close to its core of trust.

If something stands out of this breed, it is that we are facing a dog that usually has a very good state of health. It is above the average healthiness of most breeds of canids.

However, and because it has a genetic load very similar to the German Shepherd, it is subject to many of the congenital diseases of its Germanic relative.

Among the main diseases we can find:

In addition, and as a study by the American White Shepherd Association (AWSA) collected, you can also suffer from other conditions such as dermatitis, gastric torsion and epilepsy.

On the other hand, among the less common diseases of this breed, we can find the Addison’s disease (disorder in which the dog’s body does not produce enough of some hormones secreted by the adrenal glands), hypertrophic osteodystrophy (pathology that causes very painful inflammation of the metaphysis or small part of the long bones) and even cataracts.

We are dealing with a breed that does not require an excessively specific or concrete type of diet. Although it is recommended that you get used to fixed or determined times for meals, as well as that you do not receive more food than is appropriate for your age / sex / needs.

Regarding the type of food, it is advisable to opt for a natural diet such as BARF diet. However, we always recommend that you specify more specifically the nutritional requirements with your trusted vet.

As additional information, and if you want to help the transition or shedding of the dog’s coat, it is advisable to complete the diet with certain food supplements such as salmon oil, as well as a correct toilet.

When it comes to daily care, one of the most important is the need for brushing. It is recommended to do it twice a week to be able to remove the excess / dead hair, increasing the assiduity to do it daily in times of molting.

It is a breed whose fur does not require cutting and which does not have to be bathed frequently, being necessary to do so only when necessary. Otherwise, we could end up weakening the coat excessively.

Due to the Swiss Shepherd’s high energetic charge and vitality, it is recommended that you exercise daily to discharge and release accumulated tension.

Although it adapts well to all spaces, it would be ideal to have a garden space where you can feel comfortable and can run when you need it.