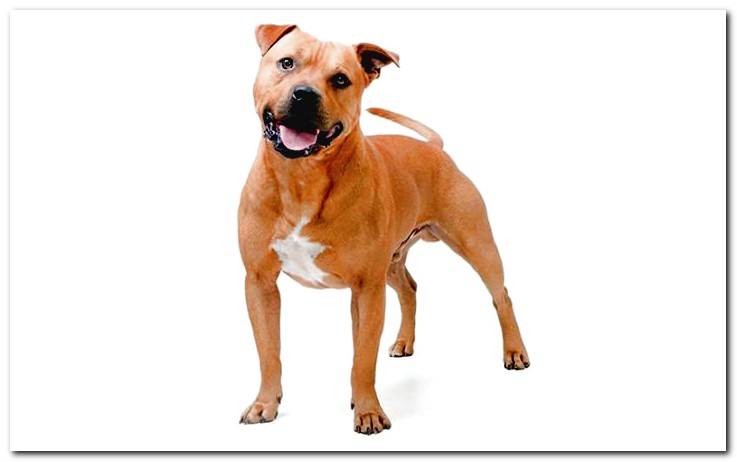 You will not find a braver, loyal and protective dog in his family than a Staffordshire Bull Terrier. Due to their strong personality, you must be firm in their education, but if they are properly trained from a young age, they will be almost second parents to the little ones at home.

In fact, in some places they are even called “kangaroo dogs.” Let’s see in detail which are their strengths, their weaknesses and what temperament they usually have. Ready @?

This class of dogs has a medium body, with a very muscular and robust texture. The loin is wide, short and straight. They have a wide and deep chest, in addition to having a barely collected belly. The neck, thick and well muscled, widens into powerful shoulders. The tail, low insertion, is thick at its base and tapers towards the tip.

Furthermore, they have a rather broad, cube-shaped skull with a short face, broad forehead, well-developed cheeks, powerful jaws, and a black truffle. According to breed standard the eyes are dark, but always matching the cloak. The ears can be rose-shaped or half upright.

Her coat is short and shiny hair. The most common shades are red, tawny and bluish, in addition to white or black.. They can also be bicolour, with tabby mantles or white spots. 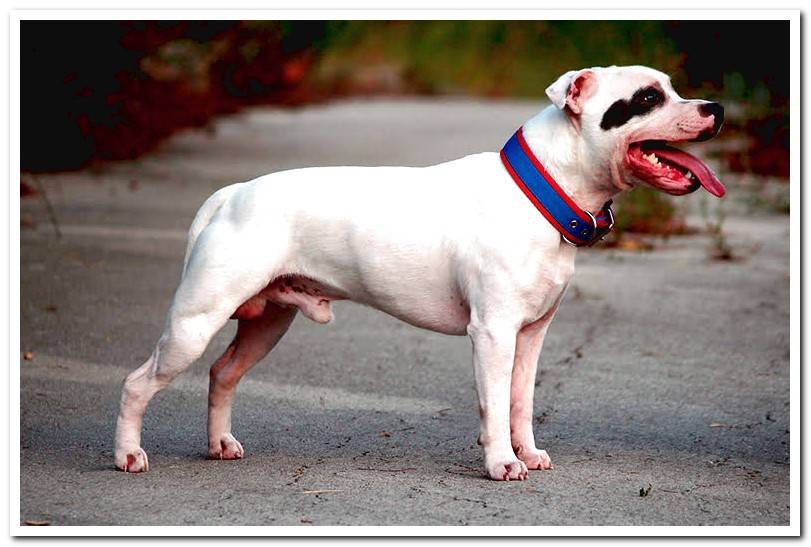 What is the character of the Staffordshire Bull Terrier like?

Although he seems like a “bad boy”, few dogs are as suitable for family life. They have a gentle and affectionate temperament, especially with the little ones, towards those who will show an unusual tolerance. However, as with all races, you should always supervise games and exchanges with minors.

Nothing will make a Staffordshire Bull Terrier happier than spending time with their own. It should be part of family life and never be left out on the patio or left for long periods of time unaccompanied. They love to sit next to you to watch television or go for a walk. People are the center of their universe.

Despite being very protective dogs with people and being on permanent alert so that theirs are safe, they do not usually worry much about taking care of homes or properties. For this reason, they are not effective as watchdogs.

They have great intelligence, although they do not stand out for their docility. Being so shrewd they tend to do everything their way. Its adoption is therefore not recommended for people with too flexible a personality or with little experience.

In training, it is necessary to show firm leadership since they are puppies, in order to combat their entrenched territorial instincts. Another key point is early socialization. This will correct their tendency to be aggressive with other dogs.

As usual it’s a digging breed, so don’t be surprised if you see your garden full of holes to the minimum carelessness. Also make sure that the fences are well buried, as they could try to escape underneath.

The urge to chew on everything they find is another important detail, especially when they are puppies; Make sure to put your most valuable items safe and buy special toys so they can chew themselves guiltlessly. 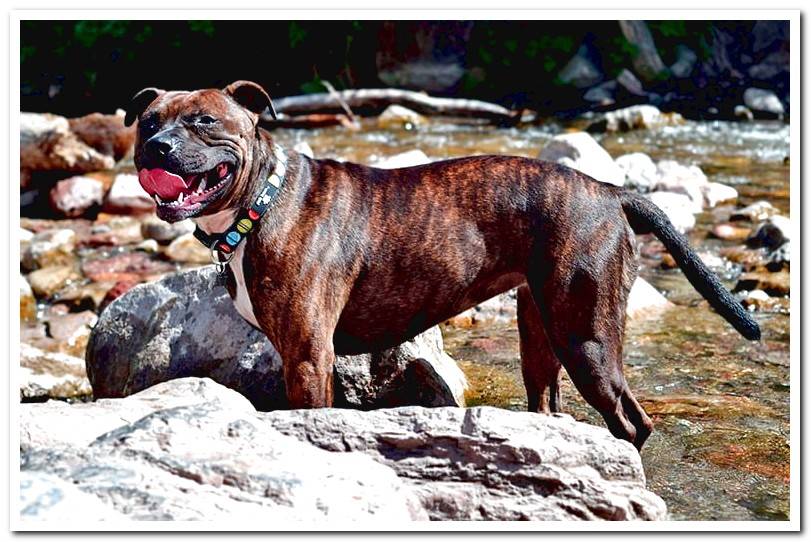 In normal times, Staffordshire Bull Terriers tend to lose little or no hair, although this situation changes during their annual move, in which you will see your home overflowing. During this period a daily brushing is necessary to keep their coat shiny and neat.

They are dogs that have a lot of energy, so they need one or two long walks per day to stay in harmony. During outings they should always be on a leash, as they can act aggressively with other dogs or try to chase other small animals.

They usually adapt well to floors or houses without a patio, provided they have their daily dose of exercise assured. However, a house with a large garden is the ideal environment to keep a Stafforshire Bull Terrier happy and balanced.

Although her hair is short, do not tolerate high temperatures well. Try not to leave them too long in the sun and avoid walks in the hottest hours. Another point to consider is its great resistance to pain. So be aware of any changes in their behavior.

His human-friendly temperament won him the hearts of the English, despite his difficult character with other dogs. Over time, the variety would reach North America, where it became a completely different breed, known as the American Staffordshire Terrier.

Curiosities of the Staffordshire Bull Terrier

There is a lot of misinformation about the Stafforshire Bull Terrier. In Spain they are considered as a potentially dangerous breed (PPP), due to its physical characteristics and its history. However, according to statistics, in the last 18 years the attacks of dogs of this breed on people have been minimal. Likewise, due to their marked territorial instincts, they must be closely controlled when they are related to other dogs.

In its origins, the Stafforshire Bull Terrier was known as the miners’ dog, since it was common for these dogs to accompany workers to the mines. Some accounts assure that, during the breaks, the miners made their dogs fight, betting to see who would be the winner. Fortunately, this is already part of the past.