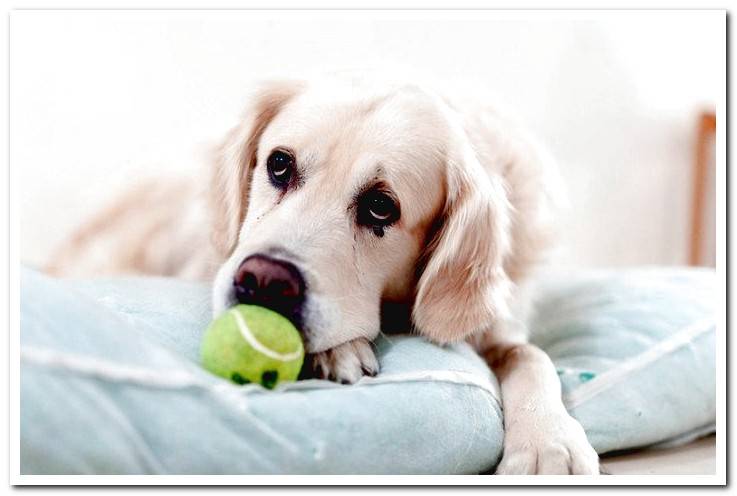 Have you noticed that, after playing with your dog, it whimpers and does not move from the place where you have kept its ball? Are you looking for it all day and when you have it you don’t want to let it go? If so, your friend is probably obsessed with the ball.

Playing with our pets is something healthy and harmless that helps us to interact with our dog and exercise him. The problem comes when that game becomes an addiction for him. We show you how to prevent your dog from becoming obsessed with the ball and enjoying it. Ready @?

Is my dog ​​obsessed with the ball?

Almost all dogs love to play with their ball. It comes naturally from their hunting instincts and helps them stay in shape. But an obsessed dog will permanently demand that his owner give him his ball. Something that is no longer so beneficial for him or for you.

Sometimes it can seem funny to see an animal playing with its toy compulsively and without being satiated. However, behind that behavior a serious problem can hide, just as it would happen with a person addicted to alcohol. It’s not that funny anymore, is it?

Obsessive behavior in dogs prevents him from controlling his actions and can have serious consequences for both the pet and those around him. The well-being and health of your dog will be threatened and living with him will be problematic.

Symptoms of a dog obsessed with the ball

Some of the signs that the dog can present and that should warn us about an obsessive problem are:

As a consequence of the symptoms derived from its obsession, the dog will begin to appear aggressive, overexcited, stressed, with tachycardias and anxiety. If all of this is not slowed down in time, the dog may even die as a result of the collapse from excessive exercise.

What causes the obsession with the ball in dogs?

In certain cases, such as in dog breeds trained for hunting or crossbreeding, this exaggerated motivation to play with your ball it is preceded by the excitement and satisfaction they feel when catching their ball, which is as if it were a prey in nature.

However, in addition to the predisposition of such dogs to hunt, in most cases, ball, toy or stick obsession is related to education, their lifestyle and the routine that their owners offer.

Lack of attention, love and fun can prompt your furry to fall into this obsession. So, either as a measure to get our attention or as a means to release his accumulated tension, addiction to the ball may appear for the insufficient time we spend with him.

Another cause comes from the reinforcement that the owners do on the excitement of the dogs when it comes to playing to tire and satiate their puppy and rest easy when you get home. However, this well-intentioned behavior sometimes causes an obsession that is difficult to stop.

Thus, if the owner perceives that his dog is overexcited before, during and after the game and does nothing to stop it, but continues to play, he will be reinforcing said behavior. The dog will understand that if he continues this behavior, his owner will throw the ball over and over again.

How to prevent or stop the obsession with the ball?

To avoid this behavior, the first thing to do is attend to its needs and watch the signals that the dog shows during its daily activities. Remember to avoid being overly excited or spending too much time alone and boring.

In the event that your furry already shows symptoms of obsession towards his ball, the best option is always to seek help from a professional, such as a ethologist, canine educator or veterinaryn. They will indicate steps and techniques to help you stop that obsession.

The best thing in these cases is always remove the ball to the addicted dog for a season until it is mentally balanced (at least a month). This period is complicated, because the dog will insist in every possible way to get him his toy.

If you are in this step, be patient and consistent. Admittedly, this move may seem drastic and cruel, but when gambling becomes an obsession it stops being beneficial to become a threat, and your furry is at that point.

Also, you should reward your dog with other entertainments that motivate and stimulate him both mentally and physically. Go for a run with him to spend energy, offer him intelligence or interactive games, work his senses, socialize, etc.

If you manage to be patient and not fall for the ball, there will be a time when those symptoms of anxiety and stress begin to subside. However, we warn you that reaching this point will be very difficult for him and for you, but it is the best for both of you.

How do you prevent relapse?

Once you have successfully removed the obsession and the dog is calm for several weeks, you can reintroduce the game of the ball gradually and always at specific times, like in the park, and during small moments.

Don’t let the dog become obsessed with the toy again, practice self-control with it. He constantly monitors his emotional state and if you see him over-excited or anxious, remove the ball and stop playing.