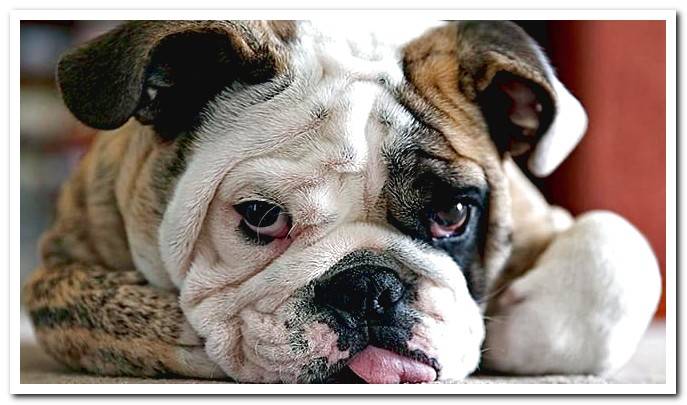 With their furrowed brows, their prominent jaws and their most distinctive gait, Bulldogs can be recognized throughout the league. It is true that his appearance can be intimidating, but nothing to do with his sociable and friendly character.

They are tolerant of strangers, children, and even other dogs. They are famous as great companions, but… watch out! If they get too comfortable they may no longer lift them off the couch. Let’s see in detail everything related to the English Bulldog.

Bulldogs have a wide, powerful and compact body. The upper line of its back forms a distinctive arch in the variety. The neck is thick and with two wrinkles of hanging skin in the throat. His back is short and strong; the deep and broad chest, with a well-rounded chest. The abdomen is markedly retracted upwards.

The front legs are slightly shorter than the hind legs. The shoulders are broad, with elbows and knees well apart from the body. The feet have compact toes, while the tail is rounded, smooth and low-set. It is not usually too long. Also, it is thick at the base and tapers towards the tip.

The head is broad and large, with a rounded shape. The forehead is flat and the face short, with hanging skin especially on the cheeks. The English Bulldog’s muzzle is uptight and wide. The jaws are square and the lower one projects beyond the line of the upper one. The eyes are round, of a medium size and dark tones. The ears are shaped like a rose.

As for its coat, the texture it has is fine, soft and shiny. The usual tones are brindle, reddish, tawny, or white; It is also common to see two-colored specimens. For example the sooty ones, that are dogs of a single color with a mask or the muzzle in black. 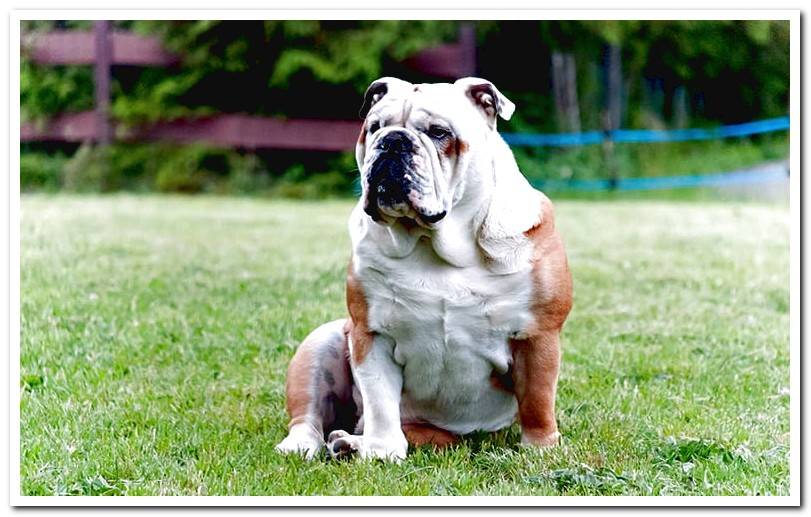 How is the character of the English Bulldog?

They are generally dogs that enjoy being with people. They tend to develop good relationships with each member of the household and are patient with the children., although they are not the most playful dogs in the world. They prefer to watch the games from afar than to participate in them. When the children get heavy, they will just leave.

With other animals there doesn’t have to be any problem either. Their peaceful temperament means that they can live with cats and dogs. Now, they can get a little nervous with specimens they don’t know. Despite this, they will hardly be aggressive.

Dogs of this breed love to be pampered and lie down in their favorite corner while watching TV or petting them. Due to its particular type of nose, they usually snore and make all kinds of noises when they are asleep.

Training can present some difficulty. It is common for them to be slow to learn, being somewhat stubborn. Therefore, you must be very patient to repeat a concept over and over again. Of course, once they assimilate it, they will always respect it.

English Bulldogs are very brave and protective dogs with theirs. However, due to his friendly temperament, they are not usually good guardians; They are also not indicated to raise the alarm, as they do not tend to bark excessively.

What care do the dogs of this breed need?

This variety can be adapted to live in any type of home. Homemade like few, they can spend the whole day lying down. However, it is necessary to carry out at least one daily walk so that they remain in good shape. At home they are not very friendly with stairs or swimming pools.

Due to their flat nose, excessive heat particularly affects them. During the outings, especially in the summer season, you must ensure that they do not present heat symptoms or trouble breathing. A walk in very hot hours can be very damaging – even lethal – for an English Bulldog.

Cold and excessive humidity are also not good. If it is winter or it rains a lot, make sure they are warm. Do not let them spend many hours alone in the courtyard; his place is with you inside the house.

Despite its size, Bulldogs are incredibly heavy and not just anyone can lift them off the ground. In addition, it is important that you watch your diet and try to exercise so that they do not exceed the recommended weight.

These dogs lose moderate amounts of hair. One brushing a week will be enough to keep the house under control, although the ideal is to do it every three days. You should also regularly clean his face and neck with a wet cloth, checking that there are no wet areas between wrinkles.

The large head of these specimens can hinder the calving process, so females often require caesarean sections to bring their litters to the world. So don’t let a Bulldog give birth in your home without professional medical
assistance.

Brief history of the English Bulldog

This breed is believed to have originated in Great Britain, in the 13th century, during the reign of King John. At that time, bullfighting and dog fighting began to become popular, known as “Bullbaiting”. In these violent shows, attendees bet on who would survive. It is worth mentioning that the ancestors of the current Bulldog were much larger, more robust and fierce than the current ones..

This bloody activity was banned in the 19th century. Some breeders opted to develop lines such as the BullTerrier, the Stafforshirre or the American Pitbull, while others focused on making the original specimens suitable for the domestic environment. Already in the 20th century, the BullDog had become one of the favorite dogs of British households, an icon of the determined English character.

Curiosities of the English Bulldog

In its origins, Bullbaiting had a functional purpose: that the dog’s bites made the meat of the bull more tender for human consumption. Ancient Bulldogs were trained to crawl, safely from the horns, to below the bull to grab it hard by the nose or by its sides until it succumbed.

On the other hand, the English Bulldog it is one of the most widespread symbols between different institutions and organizations – is the mascot of sports teams, Yale University, or the US Marine Corps. USA And did you know that Prime Minister Winston Churchill, who led Britain during World War II, was nicknamed “Bulldog”? Without a doubt, it is a breed of dog that leaves its mark.