Within different types of pitbull dogs that we can find, stands out one above all the others for its physical characteristics, the Pitbull red nose. A variety of Pitbull that stands out mainly for its colors.

Its origins are somewhat uncertain, although he suspects that it was by crossing and selecting a copy of the Irish Pitbull of the red nose family with the well-known American Pitbull terrier.

From Dogsis we are going to show you all the information about the Pitbull red nose and its main characteristics and necessary care. You are ready? Let’s go there.

It is a breed of prey obtained from the crossing of different Pitbull dogs, obtaining as a result a smaller specimen in size and with very specific physical characteristics.

As the name suggests, the American Pitbull Terrier red nose it has a red or pink truffle, the truffle is the name given to the nose of dogs, located at the beginning of their snout.

Another of the characteristics of the Pitbull red nose is its hair color, always in more or less intense brown tones, combined with white. Pitbull puppies do not also show these qualities from birth. 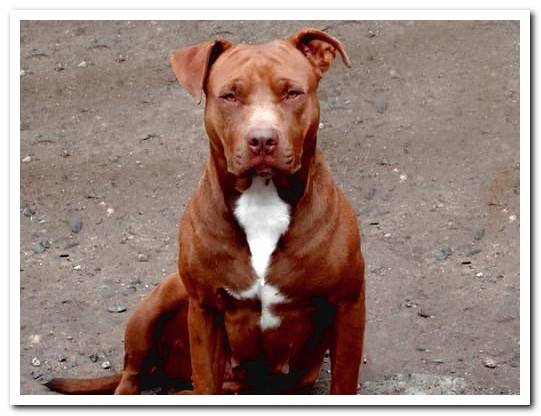 Its size is somewhat less than that of the classic American Pit Bull, reaching a height at the withers of about forty-five centimeters and a weight in its adult age of about twenty-three kilos on average.

There are no different types of Pitbull red nose, only one. So if your dog has light eyes and a dark nose, it may be a classic American Pitbull terrier or a Pitbull Blue. 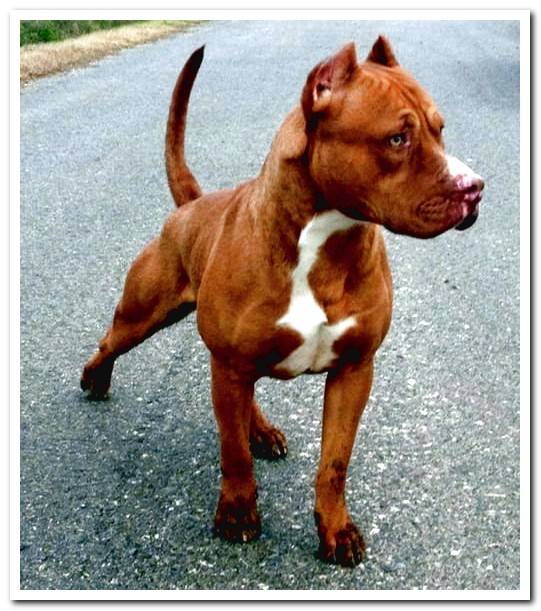 The character of the Pitbull red nose is quite balanced, it is a very smart and cunning breed, who likes to have fun with her family doing thanks to have a good time. He is very friendly and loyal, affectionate and attached to his closest beings.

By cons Pitbull red nose is also a bit stubborn and impulsive, so it is completely necessary to educate it as a puppy to avoid problems when it is an adult, we must not forget that being a breed of prey it can be potentially dangerous.

His behavior at general levels is good as long as he receives a good education and is also socialized as a puppy. Contact with other animals and dogs of all breeds and ages is essential for you to learn to respect them.

Although he is an excellent companion, he is also a great guardian and protective dog, due to these qualities and his strength in many countries when it is necessary to have a potentially dangerous dog license and civil liability insurance. 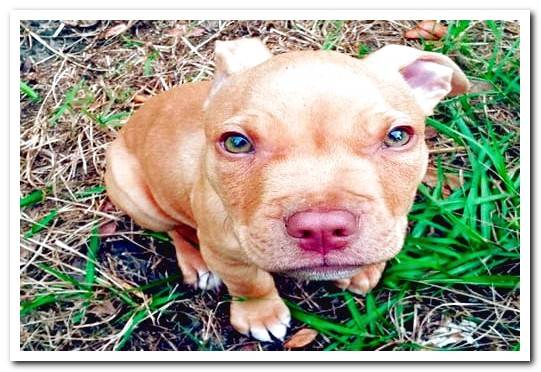 How to Care for and Educate a Red Nose Pitbull

As a good dog of prey that he is, we must educate our Pitbull red nose puppy so that it does not use the force of its jaw, that is, we must teach it not to bite strongly to other dogs or people, what is known as bite inhibition.

Teach you in depth basic orders How “Come here” and “Quiet” can be of great help to control it as an adult, let’s not forget that the Pitbull red nose is a bit stubborn and sometimes has a hard time obeying.

The American Pitbull terrier red nose puppies are very mischievous and playful, they love to play with each other constantly, even simulating innocent fights to see who is stronger. If they do not have the company of other dogs at home, we must take them daily to the dog park to play with other puppies.

On grooming, the Pitbull red nose is not a particularly delicate dog, but rather the opposite. His health is strong and it will be enough to give him the obligatory vaccinations and recommended by the vet to prevent him from getting sick.

The Pitbull red nose breed is very active, once it is an adult it will need to exercise daily and take great walks. Must waste excess energy to prevent him from becoming nervous and unstable. A good practice is to take it with us while running or cycling.

As you can see in the Pitbull red nose images that we include, it is a short-haired dog, so with a few brushings a week with a specific comb for short-haired dogs, it will be enough to keep it clean.