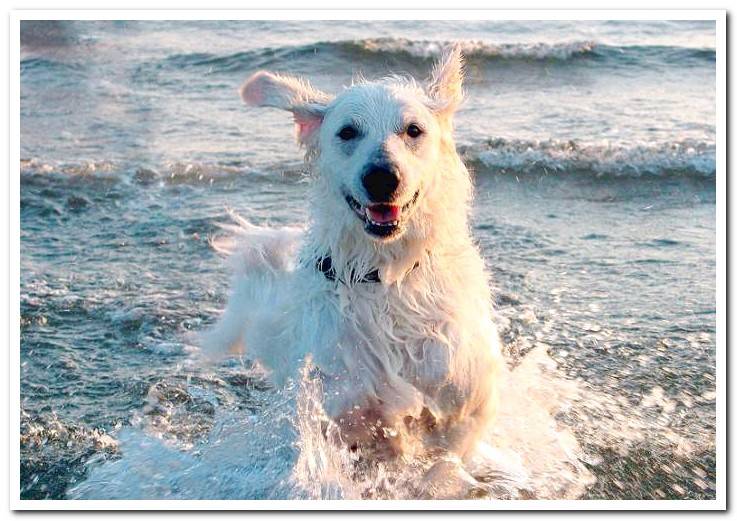 Of Hungarian origin, this specimen of a boy dog ​​and guardian, large, strong and noble conquers for its elegant bearing, for the care and vigilant protection towards its family as well as for its dense and striking white mane.

Where does the Kuvasz dog breed come from?

The Kuvasz breed developed in Hungary under the rule of King Arpad. Hungarian archaeological findings included dog bones as early as the 9th century, almost identical to those of modern Kuvasz.

The Magyar shepherds used the Kuvasz as those in charge of protect flocks of sheep and goats from wild animal predation, mainly from the wolf. In fact, most of Kuvasz’s traits are the result.

For a time, dogs of the Kuvasz breed came to be so prized by Magyar nobility that commoners were unable to own the breed. One of the best-known historical figures to receive the gift of a Kuvasz was the Transylvanian Vlad the Impaler, more commonly known as Vlad Dracula.

In the end, these dogs were cared for by commoners so they were once again regarded as the dogs of the peasantry. 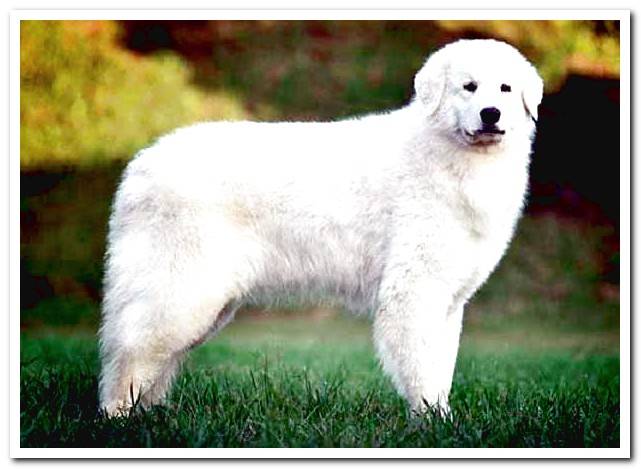 How is the but Kuvasz?

It is a large, strong and solid compression dog but without being heavy as it is a quite agile breed. It is longer than tall and its back has a medium length, with short and robust loins, a broad rump, strong and slightly elevated. As he has abundant hair, it gives the impression that he has a bigger complexion than he really is.

With short hair on the head, ears, feet and legs, the rest of its body has long fur around its neck and tail. In its upper mantle the hair is thicker, coarser and wavy, but in the lower part it is woolly and finer. The Kuvasz is only in white. Her skin is slate gray, her nose, the edges of her eyelids and her lips turning white. He has dark brown eyes.

Its head is very long although not pointed. The lips do not hang so they are well coupled. Its ears, of medium length, are implanted in height and with a “V” shape, remaining dangling. His almond-shaped eyes are oblique with eyelids perfectly attached to the eyeball.

The Kovasz’s cross is longer and higher than the back. The tail is low set and slides to the hamstrings or hocks, hanging and curving slightly upwards.

It has a deep chest with the lower part bulging to the front by the muscles and the sternum. Its belly is tucked up and its front legs are straight, with the elbows well attached. As for their hind legs, they are also very straight. His neck is of medium length, without dewlap but muscular.

We are before an intelligent, frank and serene dog; Loyal and affectionate, he is very close to his master, although he is also somewhat independent. In fact, he likes to live in his garden shed but always having family members within reach to maintain frequent contact.

He is usually vigilant, zealously defending his family, the one you consider to be your property. He is brave and strong although, at times, somewhat dominant for what we have just commented. It is not known as a particularly barking breed, but if it does, it is for some special reason. 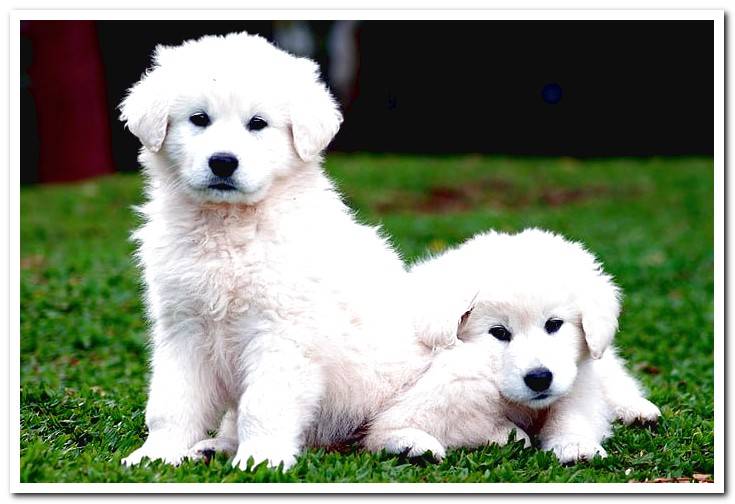 The Kuvasz does not present specific problems of living with cats or other animals, as long as it has been educated in socialization. It supports pain well and has a really stable character, making it very tolerant of children.

Despite this and due to its strength and size as well as its own initiative, it should not be cared for by a child so that no accident occurs. It is important to highlight that, among his obsessions, one of them is the protection of his family members, so it is common for him to react if they disturb “his own”. If you were challenged, you may bring out your dominance with other dogs. Due to its size and physical activity, it is not a suitable breed for urban life.

As for his training, it must be balanced, calm and firm and it is not convenient to be trained by beginners because the master must be strong, physically and mentally.

The training should not be hard, far from it. It is in a pleasant environment where a better result is achieved, with positive reinforcements and a master who allows you to make your own decisions.

The Kuvasz breed is not in a delicate state of health. Despite being a very large breed of dog, its health is better than average. This does not mean that the breed is immune to health problems, it does mean that these dogs are less prone to genetically inherited diseases than most other very large dog breeds.

However, there are some problems known to occur in this breed, such as progressive retinal atrophy, or PRA, which, while not fatal, reduces a dog’s vision, which often results in complete blindness.

Other diseases common to very large breed dogs are:

It requires a normal amount of exercise. Ideally, it should have a large garden of its own as it will be Kuvasz himself who is in charge of his own exercise.