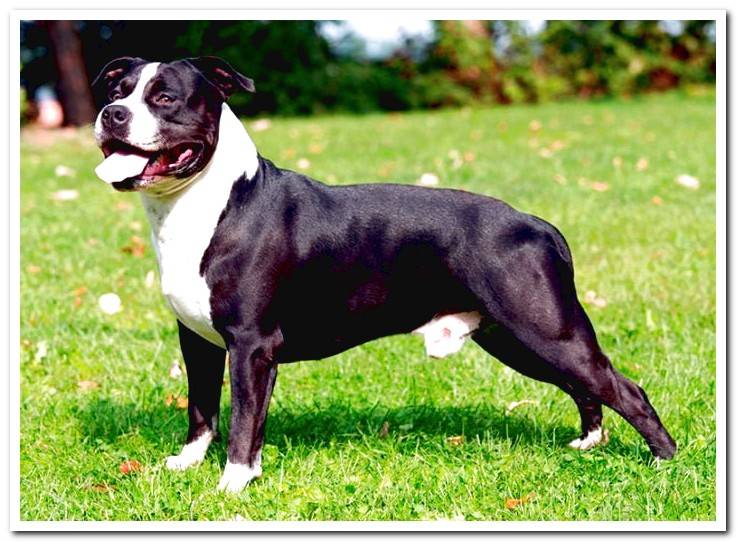 Those who have lived with an American Staffordshire Terrier (also called Amstaff) agree when it comes to highlighting its qualities. It is a dog with great gifts as a guardian, who knows how to win a place in hearts very easily.

Despite their size, these dogs move gracefully and elegantly, a sign of self-confidence. Let’s see what are its main virtues and what precautions we must take.

Characteristics of the American Staffordshire Terrier

The dogs of this breed maintain an innate courage, with a robust and muscular anatomy. They are considerably taller and more stylized than their cousins, the English Staffordshire, although their lines should give a feeling of roundness and not lightness. The loin is short and muscular, the thorax is deep and broad, while the belly is not usually very tight.

Its legs are rather short, without angulation in the front; the rear ones are well developed. As for the tail, it is low set and relatively short in proportion to the rest of the body. It is thick at the base and tapers towards the tip.

The skull is broad, with muscular cheeks, a muzzle with powerful jaws, and a broad forehead. The truffle is always black. The eyes are round and of rather dark shades; they are placed well separated from each other. The ears are high-set, medium-sized and rose-shaped.

Its coat is shiny hair, hard to the touch, but not excessively rough. The frequent colors are red, black, tawny and bluish tones, although it is also possible to find two-color individuals in which white is present. 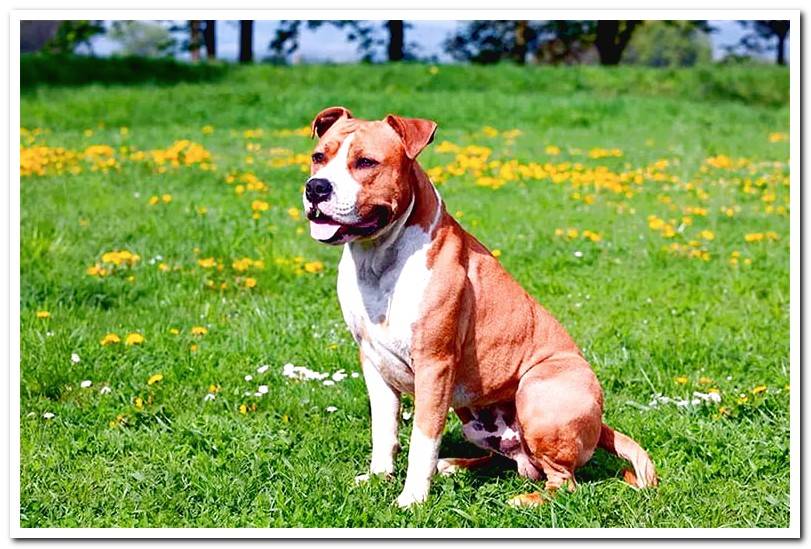 What is the character of the American Staffordshire Terrier?

The American Staffordshire Terrier very much enjoys the company of people, making it an excellent family dog. A balanced Amstaff will want to accompany you when you go out for a walk or snuggle up next to you if you’re watching your favorite show. They are tremendously loving and can fill you with licks in a few seconds when you return home.

With children he is a very tolerant, especially if he has been raised with them. However, being exemplary with a lot of physical vigor, you should always control shared games. With other dogs the relationship is usually difficult, for their fighting dog heritage. Nor is it recommended that they live with small animals, as they can see them as prey.

Loneliness is not a good companion for them. They don’t like to be without company and they will show it by barking, digging holes in the garden, destroying plants or nibbling on your favorite shoes.

His need to please people makes them relatively easy to educate, although it is essential to have a firm coach who knows how to set limits. Although socializing from a young age will help temper your aggressive instincts towards other dogs, they will never completely disappear.

They are dogs of great vitality, so they need to perform intense exercise every day. The ideal is to have a garden where they have space to frolic, although they will always prefer to share the fun with someone than to have to play alone. They can adapt to living in a flat without a garden, but it is essential that they go out to exercise regularly.

They require, at least, two long daily walks to stay balanced. They should always be on a leash to avoid running into other dogs or chasing small animals. The muzzle is mandatory, since in Spain they are considered Potentially Dangerous Dogs (PPP). Never let them go ahead setting the pace, they will consider you to be the leader. They should always leave home after you.

In normal times they only need a weekly brushing, although during their two annual molts you should do it daily. Baths are necessary two or three times a year or when it is very dirty. Its coat does not usually give off the typical “dog smell”, although the bad smell of his breath is known. To combat this, try to brush your teeth every day. 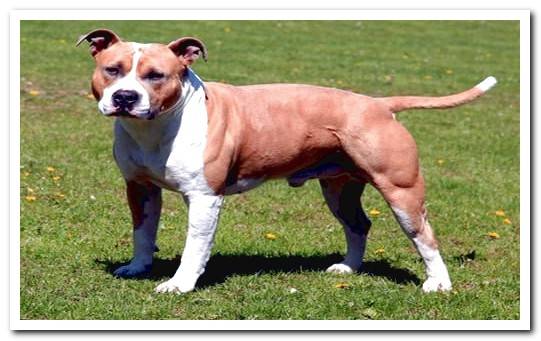 Although it is a dog that
descends from old English varieties, such as the Bull Dog or the Staffordshire Bull Terrier, is considered a genuinely American race, since it finished developing in American lands. The first specimens arrived in North America in the mid-19th century. with colonists seeking fortune in the Wild West, who used these dogs to protect themselves in a hostile environment.

At first they were indistinguishable from the American Pit Bulls, although the two breeds differed over the years and today their features are clearly marked. Already in the 20th century they became one of the favorite varieties of the North American public, although it was difficult for them to leave behind their reputation for aggressiveness. Currently they are highly valued as members of the security forces, but also for their great sporting skills.

Curiosities of the American Staffordshire Terrier

Although the American Staffordshire Terrier are considered a PPP breed by Spanish law, the truth is that tend to be very friendly and trustworthy to humans. Properly socialized and trained, they pose no threat.

Their reputation for being violent is due, in part, to their being mistaken for Pit Bulls, a breed that can be more aggressive in certain circumstances. While both lines come from the same ancestors, Amstaffs are much more stable and sociable with people.

In the USA they were very popular for much of the 20th century, especially due to Stubby, a specimen of this breed that participated in the First World War. This dog was promoted to Sergeant for his performance in combat and is the most decorated military dog ​​in the history of the country.