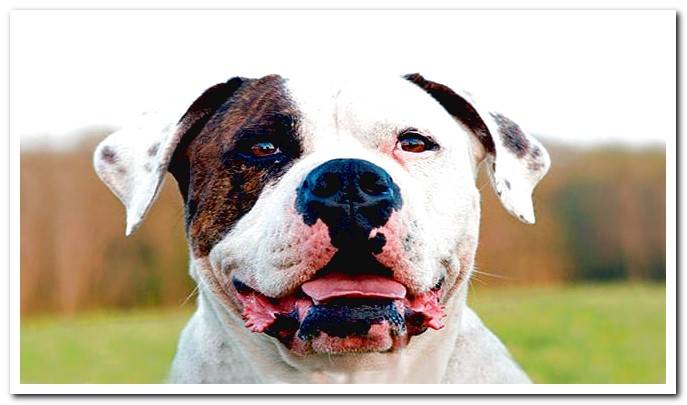 Brave, faithful and athletic are three of the adjectives that best define the American Bulldog. As we will see, this breed is descended directly from the original Bulldog dogs of 19th century England.

From Dogsis we will talk about its history, but also its character and physical attributes, so as not to confuse them with the Boxer or with Pit bull, breeds with which the American Bulldog shares many characteristics.

Finally we will explain what are the health problems that dogs of this breed usually suffer and we will give you some tips that can help you, especially when it comes to educating them. Do you want to join us to discover more details about the American Bulldog?

A male American Bulldog can measure up to 67 centimeters at the withers, while females are usually somewhat smaller. It is a medium to large dog, very muscular, strong and athletic. His complexion is robust and his head broad.

The muzzle of the American Bullgog is broad, has powerful jaws and a powerful bite. It also has thick black lips. There are two main variants. The “Bully” type tends to have a smaller snout and weighs more than the “Standard”.

Normally the truffle of the dogs of this breed is also black, although there are brown and gray. Its eyes are medium in size and quite spaced from each other, with a round to almond shape. Normally the color of the iris is black or dark brown.

The American Bulldog is a medium-eared dog, generally fallen except when they have been mutilated. The neck of this breed is very muscular, like its forelimbs. His trot can be defined as fluid and well coordinated.

As for the loin, we can say that it is short compared to other breeds and is slightly arched with a low insertion tail, thick at the base and pointed at the end. Finally, the American Bulldog’s hair is short and white on most of its body. 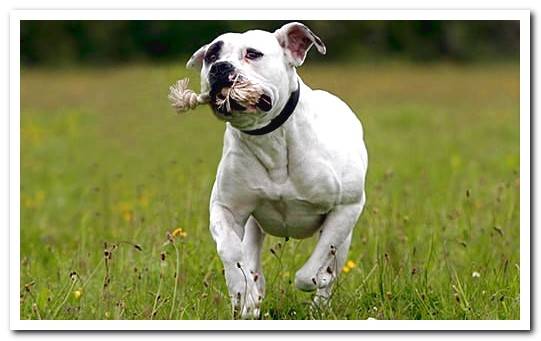 The American Bulldog is a good guardian, due to its strong sense of protection and its brave and faithful character. However, if it has not been socialized correctly, it can show aggressiveness towards strangers. That is why it is important that from puppies, these dogs are trained with an emphasis on self-control.

This breed also has good hunting skills, with a strong prey drive. This can make it difficult to coexist with other small animals and mini-size dogs. To curb these impulses it is important to practice sports for protection dogs, such as the schutzhund.

How to Educate an American Bulldog

It is recommended that the person who decides to adopt an American Bulldog understands canine psychology in order to understand what their behavior is like. This race requires a firm and calm human, experienced and who knows how to lead.

The most recommended type of training for the American Bulldog is clicker training or positive training. Experts recommend having patience when educating them, although they emphasize the intelligence of this breed, which can offer very good results in the medium and long term if you know how to handle well.

Ideally, the American Bulldog should live in a house with a large garden, where it can run freely. If you live in an apartment, you should have enough time to take long walks, since it is a very active dog and it needs to exercise daily.

It is also recommended to brush it about three times a week, to remove traces of dead hair, dirt and possible parasites.

Regarding health, the American Bulldog stands out for being one of the breeds with the fewest hereditary problems. Two of his most frequent conditions are tumors and hip dysplasia, which is a malformation of the hip joint that can cause pain or lameness. Their life expectancy ranges from 8 to 16 years.

If you are looking for a brave, athletic and character dog, with little predisposition to congenital diseases, the American Bulldog can be a good option. Of course, remember that you have to know how to educate him and work well on his obedience.

The history of the American Bulldog has a lot to do with that of the English bulldog. In the 19th century these dogs were used in England as guardians and to guide livestock; they also helped butchers kill cattle.

Some settlers brought Bulldog dogs to North America to control and hunt large animals. It was these dogs that led to the current American Bulldog. During World War II the breed almost became extinct. However, breeders like John D. Johnson and Alan Scott managed to avoid it and regained the breed.

Johnson developed the more robust variety, known as “Bully,” while Scott developed a lighter, more athletic variant, the “Standard.” Today it is difficult to find them in their purest form and the usual thing is that an American Bulldog is a mixture of both.