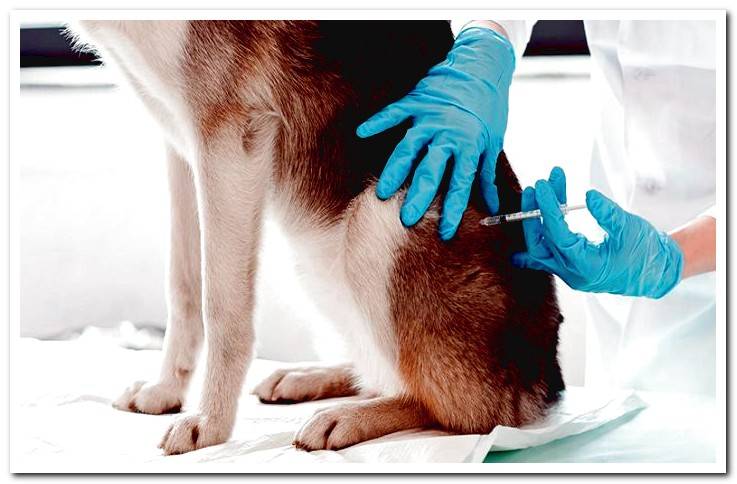 Rabies is a deadly viral disease that affects both humans and other animals, including dogs. Although it is considered eradicated in many countries, it still continues to cause thousands of deaths a year in some regions.

The most effective way to stop this disease, which, remember, has no cure, is by administering a vaccine. This can be applied to dogs from three months of life and is mandatory in many territories.

Rabies is a deadly disease caused by a virus of the family of the rhabdovirus=. It is a zoonosis, that is, animals can spread it to people. Transmission occurs primarily through the bite of an infected animal, since the virus is present in saliva. It affects the central nervous system, reaching the brain and inflaming it.

There are two forms of rage, furious and paralytic.. They cause symptoms such as aggressiveness, muscle spasm, cough, nausea, hypersalivation, behavioral disturbances, lack of coordination and, finally, death. The incubation period is 2-8 weeks, although cases have been described from one week to one year. Death comes in 1-2 days.

It is mandatory declaration. To control its extension, vaccination programs have been developed, especially for dogs, which are the most contagious to people. Cats or ferrets are also vaccinated, as the disease affects almost all warm-blooded animals. With the vaccine it has been possible to eradicate rabies from many countries.

Vaccines are preparations that contain the pathogen against which immunity is intended. But this is not included as is, but is modified or inactivated, so that in no case can it trigger the disease. In the case of rabies, the vaccine contains the inactivated virus.

In this way the immune system recognizes it and makes the necessary antibodies to face it. If the dog contacted the virus in its natural environment, its body would already have its defenses ready to attack it immediately. Otherwise, you would have no protection. The virus is deadly. Immunity is established 2-4 weeks after the vaccine is administered.

But this is not for life. So the dose must be repeated in 1-3 years. The first rabies vaccine was given by Louis Pasteur in 1885, following a scientific method that has been rejected today, since he applied the inactivated virus directly to a child bitten by a rabid dog. Currently, the virus is inactivated and purified in laboratories from cell cultures.

When to give a dog a rabies vaccine?

The first dose of the rabies vaccine can be administered at three months of age. But we can find ourselves before two scenarios. Rabies vaccination is not mandatory in some territories. Therefore, caregivers may decide not to put it on. This option is based on the criterion that the disease is eradicated in that place.

Instead, there are places where the vaccine is mandatory, like in Spain. This implies that if we do not put it, we are committing an administrative offense and will receive a financial penalty. Veterinarians’ recommendation is vaccinate all dogs. Occasionally in some territories where it is assumed that the virus is no longer circulating, cases have occurred.

The risk of infection persists in a world in which people and animals can travel thousands of kilometers in hours. The law usually marks the annual revaccination, although this could be done every three years, since there are vaccines that guarantee protection that period. It is best to consult the current legislation in our locality so as not to incur a fault.

Why vaccination against canine rabies is important

If a high percentage of the canine population is vaccinated against rabies, we can stop the spread of the virus, since it cannot be transmitted from the vaccinated dog to people or other animals. The dog is considered the animal that most infects rabies in humans. Putting the vaccine protects both dogs and the human population.

Side effects and contraindications of rabies vaccine

As with any other vaccine, you cannot put an animal that is sick or that is or has been undergoing treatment with immunosuppressive drugs. Depending on the chosen vaccine, may not be able to get into pregnant or lactating females. Vaccinating is a clinical act that can only be done by a veterinaryn.

It will be this professional who checks the dog to determine if it can be vaccinated or if it is necessary to wait. Furthermore, the rabies vaccine is safe and does not usually cause any adverse effects. In some cases, fever or general discomfort may appear, which will subside spontaneously in about 24 hours.

There may also be inflammation at the inoculation site, which usually goes away on its own. In very rare cases the vaccine will cause a severe allergic reaction that will require immediate veterinary attention. It is an urgency.