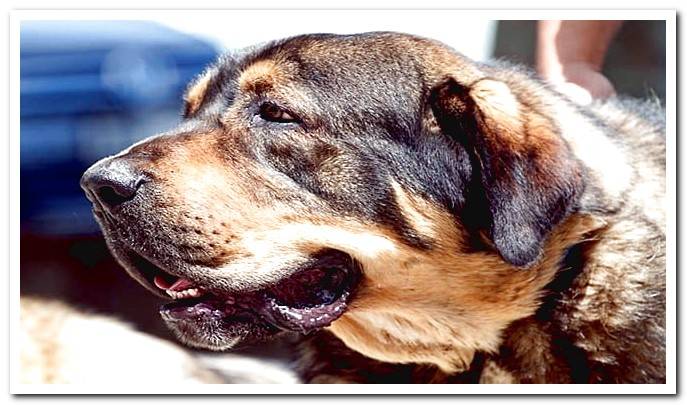 The Spanish Mastiff has an unmatched character and probably for this reason it has become one of the most requested breeds. Excellent companion dog and great keeper, the breed’s characteristics make it an amazing dog.

And although his size is almost monumental, in reality his heart is even bigger, since he is very affectionate and affectionate with his family, even as a puppy.

If you want to know all its details, from Dogsis we show you what its behavior is like, its virtues and the care it takes to be a healthy, strong and happy dog.

Behavior of the Spanish Mastiff

Among the many virtues of the character of the Spanish Mastiff it is necessary to highlight above all its nobility and loyalty. He is not given to excessive demonstrations of affection, but if the case comes, he will not hesitate to sacrifice his own life to protect you and your family.

It is not a barking dog, but hoarse and constantly drooling. An exemplary guardian and companion, he enjoys playing with children and learning new tricks. However, keep in mind that being so big and strong, they can end up unintentionally damaging a young child if we are not careful.

He is strong, brave and independent, very self-confident and with a balanced temperament. Furthermore, being a highly intelligent dog, he is capable of making his own decisions and solving problems on his own. The downside of this is that you can be disobedient and stubborn at times, especially when the owner is too soft and permissive.

Although the Spanish Mastiff can seem lazy at times, in reality it is always attentive and alert to everything that happens around it. If the case comes, it can be amazingly fast and agile despite its large size. 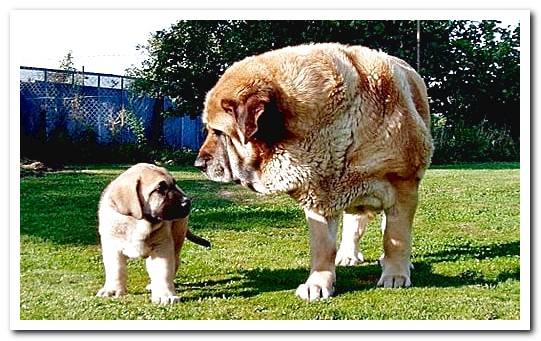 The Spanish Mastiff breed shows a large dog with a powerful presence, it has a shapely figure and strong limbs. Females usually weigh between 40 and 60 kg and males between 50 and 70 kg. The height at the withers is around 70 cm, somewhat less in females.

There are two varieties of Spanish Mastiff: the “heavy” type, more common in the north of the country, and the “light” type, more agile, slender and athletic.

Its head is large, with a deep muzzle and strong jaws, full lips and a very distinctive dewlap under the neck. The Spanish Mastiff has two spurs on its hind legs, a characteristic that this breed shares with others such as the Pyrenean Mountain Dog.

The eyes are small, almost always showing a deceptive relaxed and carefree expression (in fact this dog is always alert). His ears are pointed and fall on either side of the face.

The mastiff’s hair is short, smooth and fine. Beneath the outer layer of hair is another shaggy layer that loses in summer. Hair color can be reddish, tawny, gray, yellow, or black, often with black or brindle markings: 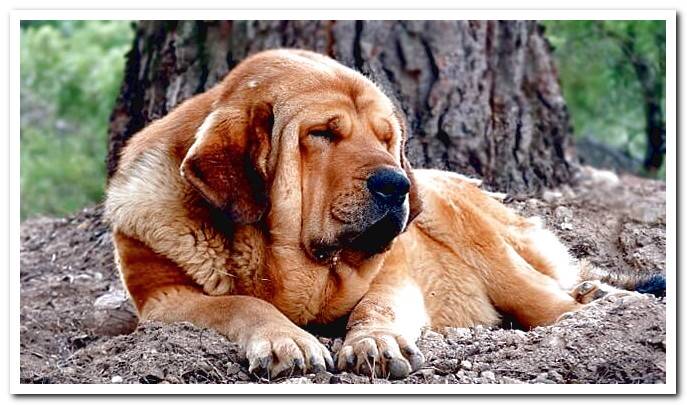 Training the obedience of the Spanish Mastiff can sometimes be a difficult task, since it is a dog of a stubborn nature and with a tendency to “selective deafness”. So it is essential to set the limits and make it clear who is the boss from the first moment, which is naturally easier if we start training when our mastiff is still a cub.

But saving this initial obstacle, educating the Spanish Mastiff is very satisfying for anyone, since it is a dog with highly developed intelligence and great learning ability. As is always the case with the smarter breeds, you should avoid repeating the same commands too often during training sessions. If we do, it is possible for our dog to fall into boredom and show disinterest.

The gradual training and socialization from an early age are very important to accustom our Spanish Mastiff to different situations, people, places and dogs. With positive and reward-based training we will get the best of it. 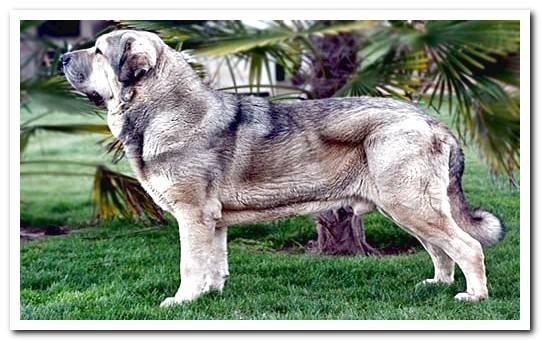 Recommended care for the Spanish Mastiff

The Spanish Mastiff’s activity level is quite low, so they only need a relatively moderate amount of exercise to feel good. Three or four walks a day without forcing him are enough.

But as quiet as it may be, due to its large size it is not a suitable dog to have in a small house or apartment devoid of a patio or garden. There is no problem in having it outdoors, since its thick coat protects it from the cold and humidity, while centuries of adaptation to the rigorous climate of the interior of the plateau have made it very well able to withstand the summer heat, provided it has water and a shady spot at your fingertips.

Brush the hair of the Spanish Mastiff regularly, especially in the time of hair loss, during the fall and summer.

In terms of health, this dog is prone to hip dysplasia and Heart problems. You can also have obesity problems in its most mature stage, so it is necessary to closely monitor your diet.

The average life span of the Spanish Mastiff is 10-11 years, although with good care it can live much longer.