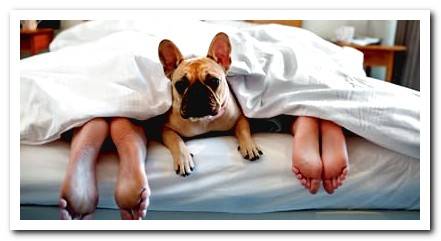 Although we are not aware of this, the simple fact that our dog urinates in bed is not only a health problem, but it can also lead to a serious behavior problem.

Dogs are unpredictable life companions, one day they can start doing things as strange as peeing in their bed or worse, in ours, with the great hygiene problem that this entails.

They can even start urinating all over the house, like marking their territory. But… do you really know why a dog urinates in bed? We explain them all briefly and clearly.

Reasons a dog urinates in bed

An adult dog that already knows how to relieve himself outside the home should not pee in his bed never, much less yours. Or at least, you shouldn’t do it voluntarily, as some illnesses or moods can cause you to urinate involuntarily.

The main reasons why a dog urinates in bed are:

As you can see the reasons are numerous, so we simply have to observe and analyze our dog to know what it is about. If we have doubts, a consultation with the vet can help us resolve them, or at least rule out some of the possibilities.

My dog ​​urinates in bed to mark his territory

We must be totally sure that our dog’s intention is to mark his territory before taking action. That is, we must discard all the other possibilities discussed above.

In the case of this problem, we must be very rigorous and settle it immediately. The first thing we must do is not humanize our dog, that is:

You should not scold your dog, much less poke him, nor do urban legends that say that you have to run your nose through the pee so that they do not do it again, that is totally absurd.

You simply must indicate to your dog who is the alpha male and what is his place, this does not mean in any case mistreating the dog, just not humanizing it. We leave you some more detailed advice here: How to be the Alpha male.

Should I scold my dog ​​if he urinates in bed?

Logically no, what we must do is educate him correctly so that he does not. By scolding him we will only get him not to do it for as long as his fear lasts, and fear is the worst way of teaching that we can use.

If our dog urinates in bed due to age, health, etc… problems. we should not even be angry. We will simply clean the urine to prevent it from producing a bad smell, end.

However, when we are walking with our dog and urinate outside the house, on the street or in a garden, we will congratulate him and much with positive reinforcement, so that he understands that we prefer that he urinate in the street.

Obviously, if it is due to illness or incontinence, you will not be able to avoid urinating at home, but you will surely put all your effort into trying to hold on until the time you walk.

If our dog pees in bed or at home simply to mark his territory, we should not scold or anger him either. We must educate him as we have indicated above so that he learns that he is not the one who dials at home.