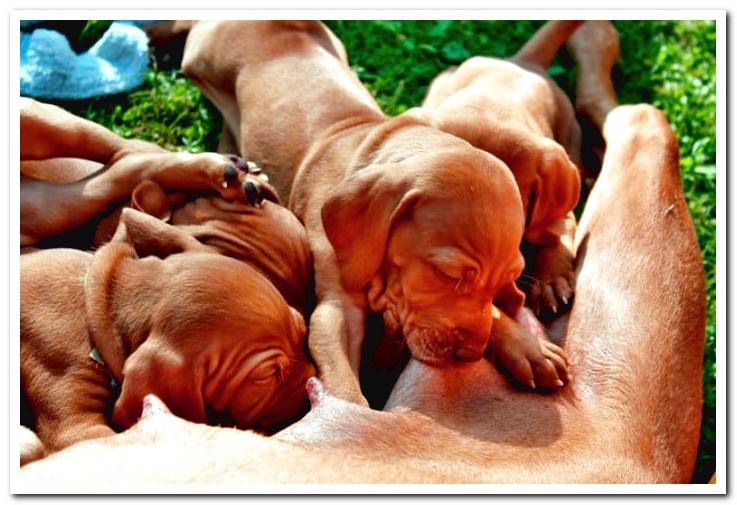 Bitches, like mammals that are, after giving birth will produce enough milk to feed their entire litter without any help. But sometimes milk may be lacking. What to do then? We tell you everything in detail.

The bitches pregnancy lasts approximately 62 days. Throughout this period we will be able to notice how their abdomen and their breasts increase in size. This is due to the growth of the puppies and the preparation for lactation. We may even see milk come out of the breasts.

Puppies are usually born in their bag of amniotic fluid. It is the mother who, with her teeth, tears it, cuts the cord and ingests the remains of the birth. He also licks his little ones to clean the secretions that they may have in the nose and mouth. After these cares, the puppy begins to suck the first breast milk known by the name of colostrum.

In addition to being food, milk contains defenses that the mother transmits to her puppies, thus improving their immune system. At first, the puppies will nurse every few hours. As they grow, the shots are spacing. At about six weeks of age they begin to try solid foods until their full weaning.

But this breastfeeding is not always so simple. Sometimes, for different circumstances, milk may be lacking. In these cases we must act quickly, go to the vet and, if necessary, supplement the puppies with specific artificial milk for dogs since being so vulnerable, a few hours without eating can have fatal consequences.

The absence of milk receives the name of agalactia. This disorder may be due to the fact that there is milk but it cannot get outside. At other times, the dog is not directly producing milk. Agalactia occurs in a small percentage of mothers.

When the bitch has milk but it doesn’t come out

If the dog’s breasts appear hard and swollen but milk does not come out, we can suspect that she does produce but it does not reach the outside. Perhaps we will notice when we see the puppies restless and moaning, since they are going to be hungry.

Breastfeeding works on the basis of a stimulus. This means that the suckling of the puppies is what is going to activate the milk production and output mechanism. So while puppies are suckling, there will always be and will be milk under normal conditions. Unless the bitch has an infection known as mastitis.

Any circumstance that prevents puppies from suckling will affect milk production.

In addition, some characteristics of bitches can also hinder their flow. For example, very nervous, stressed or frightened mothers will influence breastfeeding in different ways:

If we suspect that the puppies are not receiving milk we have to contact the vet. The latter will assess the situation and may prescribe pharmacological treatment in the necessary cases. For our part, we must ensure that the puppies stimulate the breasts as long as possible to establish a good production as soon as possible. 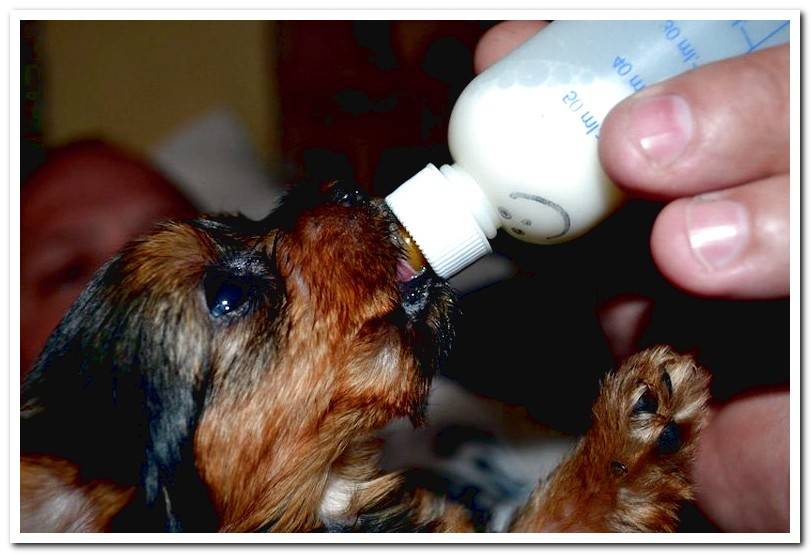 When the bitch does not produce milk or it is insufficient

These cases are of true agalactia. If in the last weeks of gestation the dog has not developed her breasts, we may be facing this pathology. It may have a genetic basis and, unlike in the previous situation, it has no treatment. These mothers’ puppies will need to be artificially fed.

A different situation is that which occurs in a small percentage of cases among mothers of very large litters. These bitches do produce milk but they don’t get enough for all their puppies.

This is usually related to insufficient feeding of the mother, especially in the 2-3 weeks after delivery. In this period the dog will need more calories because it coincides with the most intense lactation stage. It is therefore important that we take care of their diet throughout the maternal phase.

In cases where the veterinaryn considers it necessary, we will have to feed the puppies or, at least, complete the milk they are receiving from their mother and that it is very important that they continue to drink, even if it is little, since it will provide them defenses. Giving them a bottle does not mean separating them from the mother.

On sale we will find different brands of dairy preparations for puppies. They are sold in powder to which we must add hot water, shake and serve in the bottle they include. It is cow’s milk modified to meet the nutritional needs of puppies. We should never give them cow’s milk, milk from other mammals or vegetable drinks.

It is important that we check the temperature of the bottle before offering it. In addition, we must give it to them in the same position in which they would suck from their mother. If possible we will feed them without separating them from it. This keeps them warm and their movements will favor the stimulus necessary for milk production.