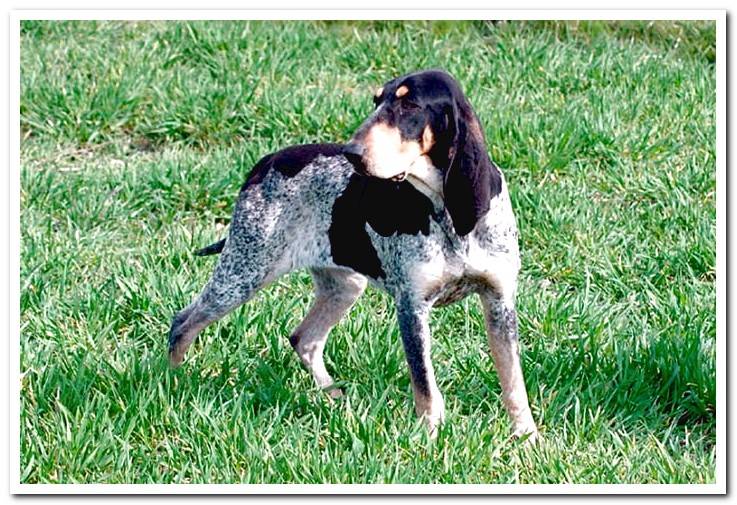 The dignified expression and majestic bearing of the Gran Azul de Gascogne specimens impress from the first moment. Developed in the French countryside to accompany royalty on their hunting expeditions, these dogs are perfect for families with an active pace of life and a penchant for outdoor walks.

In the domestic sphere, they are affectionate, faithful and devoted to their own, with a very sociable personality, especially with other animals with whom they share the home. But that is not all. Let’s see all the details of this impressive dog breed.

Physical characteristics of the Great Blue of Gascony

This class of dogs stands out for its noble appearance and for its intimidating size. Their build is slim and elongated, with large bones and well-developed muscles. They have good bone legs and a lot of resistance. The front ones are of considerable thickness and are straight, while the rear ones stand out for their athletic ability and strength. The tail is shaped like a saber.

The Great Blue of Gascony, on the other hand, has a dome-shaped skull and a medium muzzle with drooping lips and cheeks. The eyes are round and dark colored, with an expression of calm and knowing how to be. The long, drooping ears are inserted on either side of the head.

Its most characteristic feature is the bluish coat, for the visual effect caused by its black spots scattered on the white fur of the back. It is also common for them to have an oval speck on the head and fire-colored markings on the eyes and cheeks. 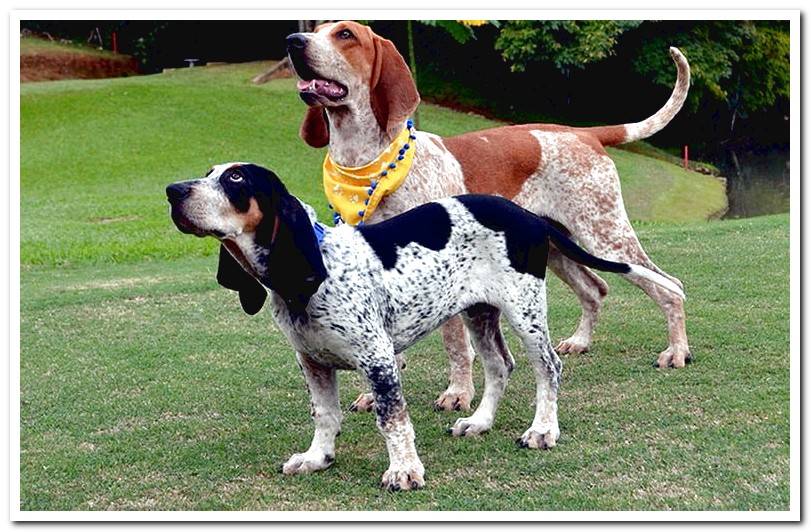 How is the character of the Great Blue of Gascony?

Despite their imposing appearance, these dogs They are usually extremely affectionate and very docile with the people with whom they share their life.. With children they get along wonderfully, although due to their large size you must closely control the play sessions. They will establish positive relationships with other pets, as they feel more comfortable as part of a herd.

They do not adapt as well to the surroundings of a city and even less to living in small apartments. They are very large dogs to feel comfortable in narrow places and, in addition, they have a very deep and intense howl that will surely displease both locals and strangers.

A Great Gascony Blue will be happy in the field, both on a farm and in a chalet on the outskirts where it has enough space to move. People who enjoy hiking in rural settings or hiking will find in these dogs an ideal companion.

His hunting instinct remains dormant, so you should always take it out tied, especially if on your route there are possibilities of crossing small animals such as cats, rabbits or birds, whom you will chase like prey. In some places they are still used to stalk deer and wild boar.

Recommended care for the breed

The specimens of Gran Azul de Gascuña need – at least- 2 hours of daily physical activity. It is recommended that these exits be through open spaces, so that they can move freely. Hunting mock drills are also a good option Well, this helps them stay balanced.

The dogs of this breed take time to complete their maturation, so they will continue to behave like puppies until they are two years old. For this reason no need to strain your muscles or joints until its growth is complete. Meanwhile, keep them from climbing too many stairs or climbing on furniture when they are small.

The care of the coat is simple and no more than one brushing is needed per week. Baths are necessary once a month, unless they get very dirty from an excursion. Also, after each outing you should check its legs to make sure that no thorn has been stuck.

Their ears should also be checked frequently, because of their characteristics tend to accumulate moisture, it can end up in fungi. Finally, it is advisable to look at your thighs and abdomen for parasites or ticks when you return from areas with very dense vegetation.

History of the Great Blue of Gascony

It is believed that the Great Blue of Gascony has its origin in the Middle Ages and that it emerged after the crossing of a specimen of the breed St. Hubert with autochthonous varieties in what is currently the French Gascony. For centuries they were preferred by the aristocratic classes, helping the nobles to hunt for wolves, bears and wild boars.

Unfortunately, this link caused that after the French Revolution they stopped bree
ding and their number fell dramatically in France. The breed would find in North America a suitable place to continue its development.. In fact, there are a variety of very popular hounds in the US, the Bluetick Conhound, that descend directly from these dogs. Blueticks make excellent tracking and chasing dogs for raccoons and have inherited the great nose from their European ancestors.

Curiosities of the Great Blue of Gascony

Some lovers of the breed claim that the Gran Azul de Gascogne packs had a resistance and a sense of smell of such sensitivity that they could keep track of their prey for weeks. Because they worked in groups of five or more, they had the ability to smoothly account for a bear or hold it down until the hunter arrived.

Paradoxically, These dogs, which were synonymous with the absolutist monarchy in France, became a symbol of the fight for the freedom of the English colonies in North America.. Legend has it that it was the Marquis de Lafayatte, a French aristocrat, who brought the first copies of Great Blue to North America.

This nobleman joined the American fight for independence and, in 1785, when he met George Washington, he gave him seven magnificent hounds, who accompanied the hero throughout his liberating campaign. According to many accounts, the Great Blues of Gascony and Washington became inseparable.