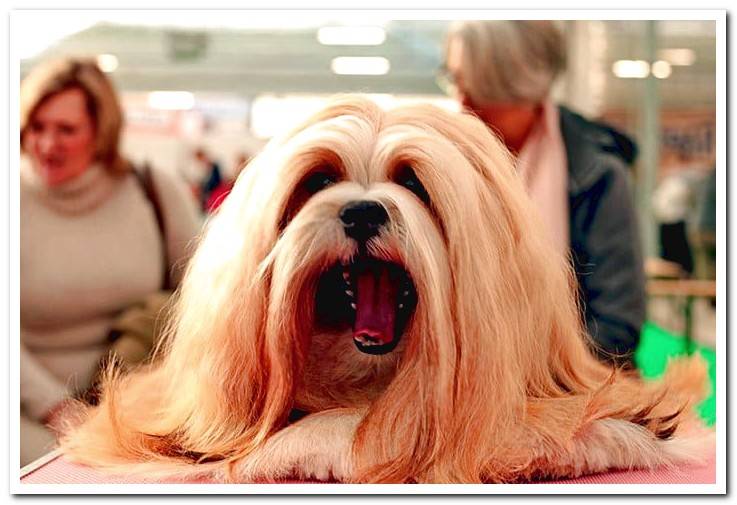 Make no mistake about it: despite their cute appearance and calm Zen gaze, these little ones will protect you even from your shadow. And it is that the Lhasa Apso believe themselves true lions when it comes to defending their family and theirs.

These exotic companions possess unlimited self-confidence and highly developed intelligence. At home they are very calm and quite independent, as well as loving with their most intimate group. Do you want to know all the details of this impressive breed? Let’s go there.

Characteristics of the Lhasa Apso breed

The Lhasa Apso they are small in size but not fragile at all. They have a strong bone structure, a well-developed chest and muscular hindquarters. Seen from the side they are longer than they are tall, which further enhances its elegant bearing. They have oval, dark-colored eyes, barely visible behind their long bangs.

The ears hang to the side and side of the face, while the tail is high, well populated with hair. They usually carry it high and curved on the back. The coat, abundant and double-layered, It is formed by a long coat that falls in a cascade towards the sides and that, in adulthood, can reach the ground. 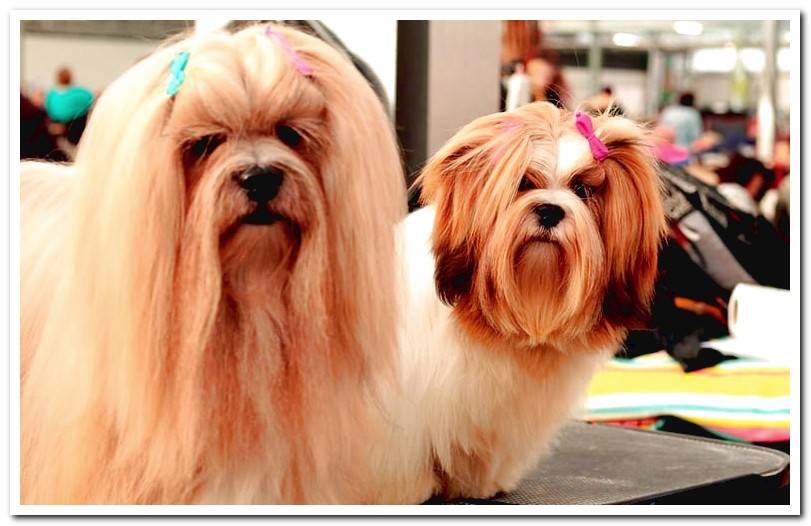 How is the official standard of this breed?

The face area of ​​Lhasa Apso dogs should show the typical expression of the breed with a robust head and bangs covering the eyes, in addition to a beard and mustaches of considerable length. Also, the edge of the eyes and lips should have a well-marked black color. A square muzzle is considered a deviation from the standard, as is a drooping tail during walking. The coat does not have to be woolly or silky.

What is there to know about the character of a Lhasa Apso?

These dogs they usually have a jovial temperament. They are very playful with the people with whom they share their lives and they like to spend time with their family. It is not uncommon for them to follow their favorite humans from room to room. However, they can also spend time alone, as it is not a breed that tends to suffer from separation anxiety.

Young children are not among their favorites. The Lhasa have little patience with the clumsiness that young children usually show. Therefore, they will be better adapted to families with older children and with a greater sense of responsibility. With other dogs in the home you should pay attention They will always seek to become leaders of the pack. The most prudent thing is not to breed them together with specimens of races with the same tendencies.

These are dogs that have their own personality and that will not make an effort to impress you. They are great guard dogs, as it is part of their nature. Also, they tend to be very suspicious of people they don’t know. Can a family friend establish a good relationship with a Lhasa Apso? Sure, but don’t expect it to happen the first time you change. 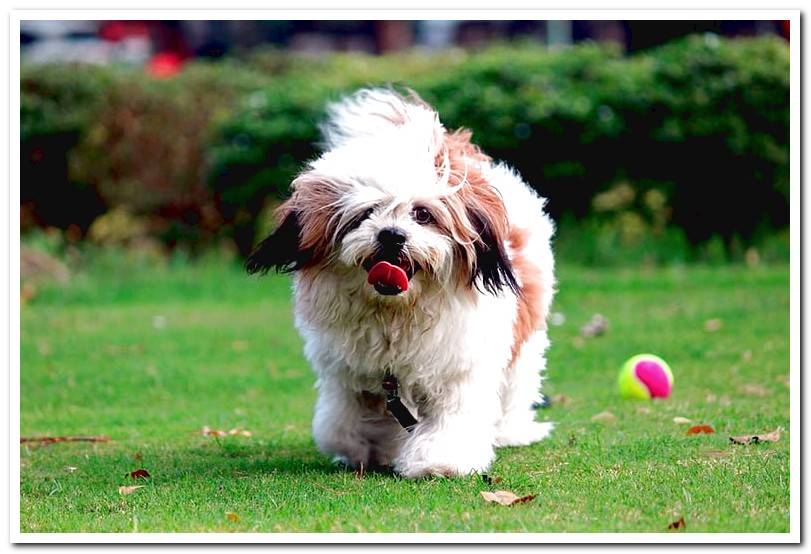 How does a Lhasa Apso puppy behave?

Lhasa Apso’s puppies they are usually playful and a little difficult to instruct. We are also before a breed that takes longer to mature than average, so you should have patience with their antics and be consistent in training. These dogs are natural leaders, so make sure they don’t take full control of the home. Firmness is key to avoiding behavior problems later.

Early socialization, therefore, will be essential to appease the distrustful character of this breed. Although it is a trait that they carry in the blood, by relating from a young age to people and other dogs you will make them more receptive and less suspicious.

The Lhasa Apso They adapt well to small floors or terraced, since they usually do not need to do much exercise. However, a house with a small patio will be a great help to occupy their time, as they can have fun playing or jumping alone. Several short walks a day will be more than enough to keep you balanced.

Their fur is prepared to make them resist both in cold climates and on sunny days, although in summer he will feel better if you trim his showy fur. Avoid getting wet in winter, as your hair takes time to dry and this can open the door to a good cold.

Your adorable cloak will need daily brushing to stay neat, while it is recommended to bathe him whole every 2 or 4 weeks depending on how dirty he is. One option is to take him regularly with a hairdresser, as keeping the coat of a Lhasa Apso in good condition is a professional task. Another idea, if you prefer to save on a stylist, is to cut your hair very short.

These dogs are not usually gluttonous, but they are very selective with what they eat. They need a diet rich in protein and fat, which helps your skin support its heavy double mantle. Caring for your teeth must also be careful: you should brush your teeth at least every other day and check your gums regularly. 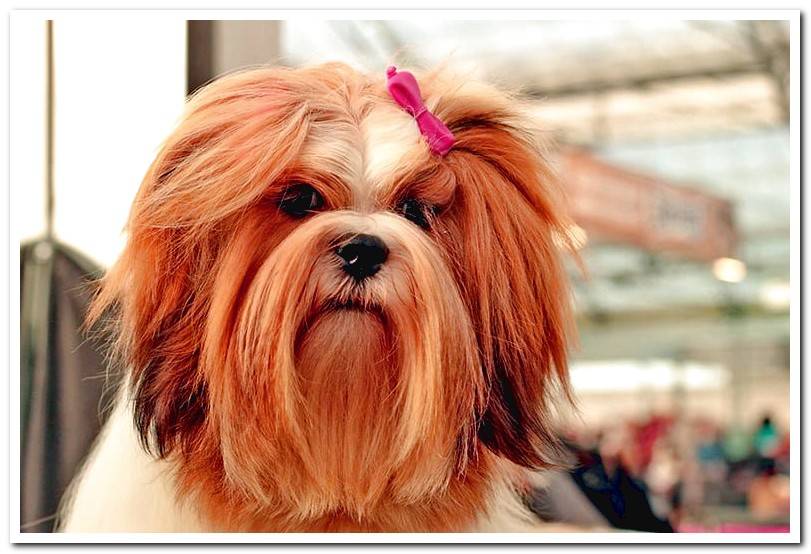 Lhasa Apso are usually quite healthy dogs, although they have a tendency to develop certain health problems. For example:

You should also be careful with food allergies and of the skin, which usually have a higher incidence in these dogs. 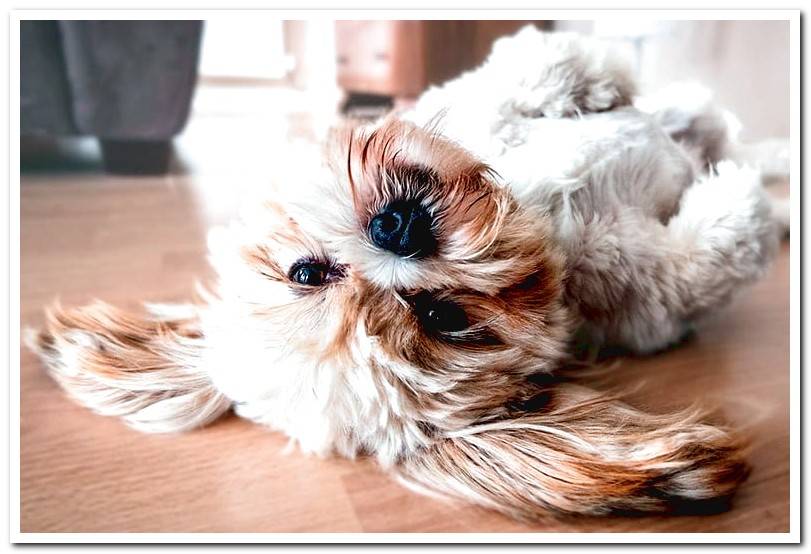 History and origin of the Lhasa Apso breed

Originally from Asia, these dogs take their name from the city of Lhasa, the capital of Tibet.. It is an ancient race that for a long time only inhabited the palaces and monasteries of this remote region. They were considered sacred and their primary function was to exercise as guardians of the home.

They worked as a team with the Tibetan Mastiff: the loud barking of the Lhasa Apso alerted the latter, protectors abroad, that something was wrong. Hence its original name is Abso Seng Kye, which means “Dog-Lion Barking Sentinel”.

These dogs were always considered bearers of good luck and so valuable that they were not allowed to leave Tibet unless they were a personal gift from the Dalai Lama. The breed has been gaining in popularity in the western world since 1933, when explorer Suydam Cutting received a pair of Lhasa Apso as a gift. This allowed him to start raising them in the United States. Its standard was officially recognized in 1935.

How much does a Lhasa Apso cost and where can I buy it?

From Dogsis we invite you to visit the animal protectors and kennels in your locality, there are thousands of dogs of all breeds, sizes and ages waiting for a home. Adopting is a free and very positive practice.

But if you are sure that you want a puppy of this breed and you can not find it in protectors or kennels, we leave you information about its price and the best known breeders in Spain.

The cost of a copy of this variety is between 400 and 600 euros. It is not usually a difficult breed to get. Remember to always request the pedigree certificate both from the puppy and from its parents. In addition to the corresponding purchase invoice.