In addition to being an excellent home companion, the Cavalier King is also a great small prey hunting dog, which is colloquially known as a retriever.

However, over the years it has been more adapted to homes as a companion dog, due to its sweet and loving character, very playful and respectful. Do you want to know everything about this breed?

Although in the USA It is known by the name of English Toy Spaniel, if we realize it, the name of this breed explains a lot about its origin. It receives its name precisely because it is King Charles II (King Charles) who keeps a very high number of dogs of the generic Spaniel breed in his court.

The term Spaniel does not mean that they were Spanish dogs, simply that it was the Spanish who brought them to the European continent from Asian areas.

Spaniel dogs are characterized by being small to medium-sized hunting dogs, with long hair coats and hanging ears.

Among the hunting dogs, they are dogs “collectors “Or”lifters “Since, unlike hunting”shows ”, Who show the prey to its owner, they“ recover ”the prey for the hunting owners. By “recover” we mean that he only carries the prey in his mouth without biting or playing with it. 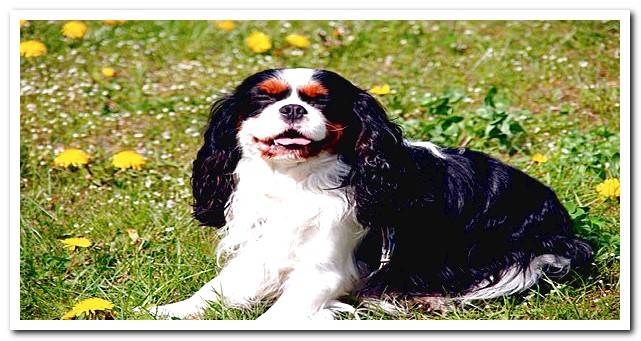 Since Charles II was a fervent admirer of these dogs, he was seldom seen without one by his side and even slept with them. Due to the love he had for this breed, a decree was issued, which is still in force in England, by which the Cavie (Cavalier, which means “gentleman” in English) must be accepted in any public place, including the Houses of the Parliament or other points where they were not normally allowed.

As a curiosity, this breed was not exactly as we know it now. Due to the fame that both Pekingese and Carlinos gained at the same time, it was inevitable that the Cavaliers will cross with these races reason why their physical characteristics varied and gave rise to something similar to how we know them today.

Realizing this variation, an attempt was made to return to the original aspect, and an official breed standard could be drafted, and the definitive Cavalier we know today emerged.

How is it physically?

The main and most attractive of this breed are its long ears. Covered completely with hair, located on the top of the head. It usually has a height between 32-36 cm and weigh around 5-9 kg.

Confusion with the King Charles Spaniel breed is very common due to its similar coloration in terms of fur. To differentiate them, it must be borne in mind that the Cavaliers – or Cavie, as they are popularly known – tend to be larger in size and weight than the King Charles Spaniel, who also have a more curved head and a smaller jaw.

Since another of the breed’s most characteristic features is its long, smooth and silky hair, we can find the Cavalier, generally classified in four colors.

It has prominent fringes on many parts of its body and especially on the ears and tail.

Genetic morphology of the breed

It is a breed of small, and sometimes medium-sized, compact dogs of harmonious proportions that have a flat-shaped skull with well-separated, dark, striking, expressive and large eyes.

Despite the fact that its muzzle is very short, it has a well defined truffle. The jaw and its jaws with their teeth form a perfect scissor bite making it complete and regular.

Very straight, proportionate, agile and strong front and rear legs support a medium chest, a short back and a rectilinear back that ends in a balanced tail.

As for the movement, it is elegant and easy-going, being powered by its hind legs.

They are loving, intelligent, friendly, kind and cheerful dogs. The Cavi is a sweet, gentle, playful, affectionate and silent dog since it does not usually like to bark at all.

Despite having all these characteristics, since they descend from the Spaniel, they are very curious dogs and explorers, so they tend to pursue targets.

This breed tends to socialize with some ease, so it tends to get along well with both people and other dogs, whether female or male, as well as other animals.

Despite being very sociable dogs It is true that it is important to start socializing as a puppy to avoid being shy or, on the contrary, being aggressive when you are an adult. Also to avoid chasing other small pets, due to its exploratory nature.

As for the training, it is something relatively simple. Because they are very intelligent, they learn with some ease. Although it is true that they do not highlight their behavior for anything in particular, they respond very well to obedience training.

Normally what works best is positive reinforcement and not the traditional punishment.
As a tip, one of the most appropriate styles is clicker training. This mechanism consists of using a small mechanical device that makes a characteristic click noise when we press a metal sheet arranged for this purpose.

When this “click” occurs, the dogs receive a prize, so each time they hear it they will associate it.

When cavaliers King Charles spaniel are well socialized and educated, they do not usually present any behavioral problems beyond the usual ones, although it is also true that they can be very destructive to the environment and to themselves if they develop separation anxiety when they are left alone for a long time.

It is common for them to constantly seek human attention for what they hate being alone which makes it a breed to which you have to dedicate a lot of interest and include it in the family’s plans.

Despite this, it is very docile so it adapts perfectly to the rhythm of life imposed even in an apartment as they are very calm and quiet and do not require a large space.

They adapt very well to children making them perfect pets for a family, as they also get along well with other dogs and animals. They are usually considered good pets for first-time owners.

It is a very familiar dog so it enjoys a lot of the company in its home reason why, if you do not spend too much at home, it is not the most appropriate breed for you since they do not adequately support spending much time in solitude.

Of course, if you are looking for a faithful, sweet, fun and loving dog, the Cavi is made for you. It’s a dog very sociable and loves to play constantly. Also, as he enjoys playing, he really enjoys learning commands and tricks (he’s very smart) which makes him very easy to educate.

In addition to playing and learning, another of his favorite pleasures is lying down curled up next to his owner. What makes it even more perfect a companion dog is that it also serves as an alert dog at home. We are not facing an independent race.

The Cavalier is quite resistant to serious diseases. Their life expectancy ranges from 12-15 years. However, due to the intensive inbreeding to which the breed has been subjected, it is possible to find certain diseases in this breed.