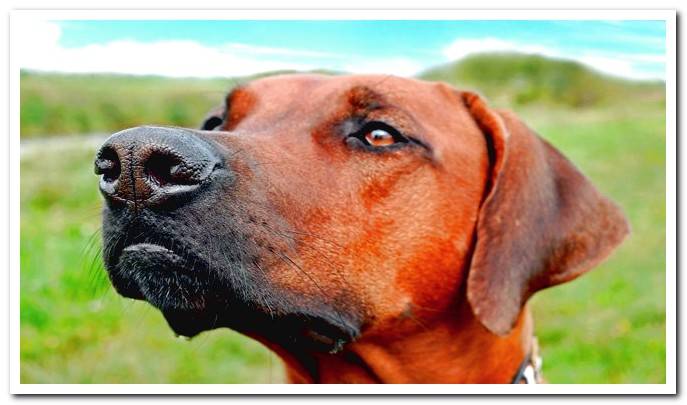 Of South African origin and mischievous but very intelligent and loyal behavior, the Rhodesian Crested also known as Rhodesian Ridgeback (its name in English) is a dog that will make you fall in love at first sight.

Excellent as a companion dog, hunting companion or watchdog thanks to its large size, it can also be your best friend. Do you want to know all the details about the breed?

Where does the race come from?

It was the European colonists when they arrived in South Africa, in the interior of the Cape of Good Hope, in the 16th century who ran into a town – the Khoikhoi-, who used a semi-domesticated dog to protect livestock.

The farmers subsequently improved the breed to be able to use it as a hunting dog in unexplored lands in Africa. They needed dogs that could raise big game in addition to protecting their farms from marauding humans and wild animals at night.

Similarly, they needed a dog that could withstand the difficulties of living in the African bush, capable of survive drastic temperature changes (from the heat of the day to the freezing temperatures at night), being able to go twenty-four hours without water.

They also needed him to have short hair to avoid ticks from the bush. In addition, that dog also had to be a companion and protection dog for the wife and children. They were looking for perfect copy.

Already in the 19th century, Europeans had imported a wide variety of dogs into this area of ​​Africa. On the other hand, due to the extreme climate, the scarcity of water or the aridity of the terrain, it was observed that they could not perform certain tasks.

They realized that, unlike the breeds they intended to include, the native dogs were fully adapted and hardly they were panting, so the breeders took what is desirable from each breed and created a super-dog which they described as “lion dog “. 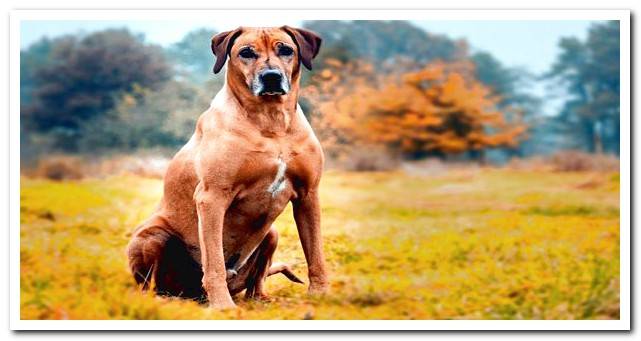 We are facing a dog with a good appearance, muscular, agile, strong and active, with a symmetrical and balanced appearance. At first glance it has a good plant and an athletic shape, capable of traveling long distances with adequate speed. It has an elegant agility and solidity without being robust.

Of course, and as the name of the breed itself indicates, as soon as we observe a Rhodesian Crested, what will most attract our attention as a distinctive feature, is the crest that it has on its back.

The ridge is formed by hair growth in the opposite direction to the rest. Normally, it starts just behind the shoulders and descends to just before the hips. At the point where the ridge begins there are two identical crowns (spirals) directly opposite each other.

The ridge must be clearly defined and symmetrical, tapering to the hip. The length of the crown shall not exceed 1/3 of the total length of the ridge orridge.

A good average width of it is 5 cm. However, not all puppies are born with the crest, as they can have more than two crowns or less, or they can be asymmetric. It can also be short or long (although the latter is very rare to see) or it can be irregular.

Its coat of hair is short, dense, smooth and shiny, without being woolly or silky. Color normally ranges from light wheat to reddish wheat or red fawn, as supported by the breed standard. The presence of white on the chest and fingers is officially permitted, but an excess of white hair on the abdomen or on the fingers is not desirable. 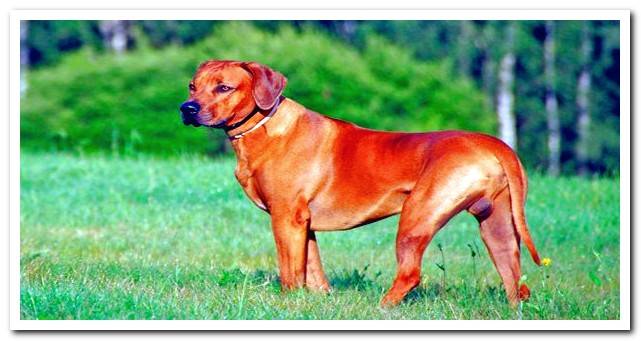 The head is of good length. It has a flat skull, quite wide and well marked. Its muzzle turns out to be long and powerful, with lips with properly adjusted edges and strong jaws made for hunting heavy prey.

Their truffle tends to be brown or black, usually depending on the color of the coat. It has round and expressive eyes, of a color in constant harmony with the fur.

As for his ears, they are quite high insertion but of a medium size, which end in rounded toe and they happen to be glued to the head with a very slight drop and in a natural way.

Looking at its body, it is powerful because its front legs are straight and strong, with a correct skeleton and with elbows very close to the body, which makes it a quite resistant animal.
Its neck has no dewlap and it glides to a chest that is not too wide, even rather broad and low. The ribs are moderately arched under a powerful back that supports a strong, muscular loin.
The tail is thick at birth but decreases towards the tip, ending with a slight upward curve

This morphology corresponds to the standard accepted and recognized by the Royal Canine Society of Spain (RSCE) including them within bloodhounds, tracking dogs or similar breeds.

The Rhodesian Ridgeback is a loyal, intelligent, and independent dog so it turns out to be somewhat aloof from strangers without being aggressive.

He has a calm, solemn, sweet and stable temperament, putting ignorance before challenging. His character is strong and he likes to protect his family.

Although, as a puppy, we find ourselves before a dog of character very active once it matures it will become an extremely calm dog. So calm that it can give the impression of being a large and lazy hound, although it will normally present a somewhat threatening appe
arance.

Since this this dog was created to be, among other things, a good protector of families, we are dealing with extremely tolerant dogs and excellent companions, so they enjoy the company of other dogs, as long as too many males do not get together because they could occur you fight for dominance.

These dogs can get along with cats if they have grown together. Because its roots are hunters, it does not usually get along with other very small animals because they can be observed as prey.

It is a patient dog, especially with children, for whom it feels especially weak, although due to its size and strength it is advisable to be alert when playing with them to avoid any accident.

They are excellent guard dogs and family protectors, but they must know who is in charge. He is faithful and loving to his master but reserved to strangers, although he rarely barks. Crested dogs they are always alert before anything that is out of the ordinary.

Since he needs to be trained as a puppy, his acquisition not recommended for inexperienced people or first-timers. It is important, as in all races, that you be taught to socialize as soon as possible as this will avoid inconveniences in your behavior.

The Rhodesian is easily trained so its domestication is above average. This breed requires training based on positive reinforcement (based on rewards).

Given their innate guardian skills, crests should not be trained as dogs for protection. Your natural protective instinct must undergo obedience training for your control.

According to the standard, the Rhodesian crest is an indispensable attribute, so breeders have traditionally discarded those that did not meet the requirement.

A requirement that, on the other hand, can cause inconveniences for its health since it has been shown that the mutation that causes the formation of the crest predisposes the dog to suffer a disease called “Dermoid sinus” or “Dermoid sinus”.

It is generally a healthy and athletic dog. But, like all races, you can suffer from other diseases: