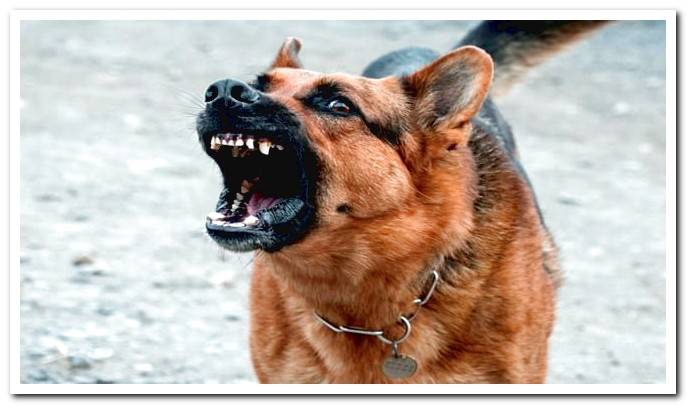 It is very simple to say that dogs are aggressive by their very nature so as not to admit our mistakes as owners. But the truth is that in most cases aggressiveness in dogs occurs because of us.

We are going to review which are the most common causes that originate or incite canine aggressiveness. This way we will know what is the origin of the problem and we can solve it.

In order for a dog to learn to behave in society, it is essential that as a puppy it joins other dogs, animals and people. You must know them, play with them, smell them, and even be scolded when you do something wrong (both by other dogs and humans).

Socialization it is essential so that our dog has healthy mental health and does not become aggressive with age. We must socialize him as a puppy and throughout his life.

Aggression due to mistreatment

There are many people who not only do not know how to take care of a dog but also mistreat them. Can be physical abuse (hitting him when he does something wrong or when he ignores us) or psychological abuse (chain him all day, lock him up).

You should never hit a dog, because it will learn from us to use aggressiveness when it deems it necessary. In addition we will promote fear and misconduct, there are many others healthy ways to correct a dog.

All dogs are territorial, some more than others. That is why they are constantly urinating marking your territory, it is a normal form of communication between dogs and other animals.

When a dog sees a stranger or other animal invade what the consider your territory It can bring out your aggressiveness and protective instinct. Something to avoid as it will end up being a serious problem of conduct.

Unknowingly, we ourselves often encourage a dog’s aggressiveness, through the typical tug-of-war games or making our dog rage, jokingly, playing.

This type of games, far from being healthy and recommended they are a medium and long term danger, since we directly promote aggressiveness. We must avoid them completely.

The same is the case with females, capable of becoming aggressive towards any dog ​​or bitch if they are in the heat cycle.

Aggressiveness out of fear

When a dog is scared, it shows a few obvious symptoms of fear that we must identify to avoid going to the next state, the state of panic.

When a dog go from fear to panic it becomes unpredictable and can become very aggressive in defending itself. We must be very cautious before a scared dog.

We all know that dogs are very protective of their owners, so if they see someone trying to harm or hurt their owner, they will become aggressive and try to defend him.

This behavior is totally normal, it is a defensive act that far from being treated as a behavior problem must be carefully evaluated.

Aggression due to health problems

When a dog is sick it generally feels much weaker, this makes it able to show aggressiveness towards other dogs or people that it considers to be a danger.

It can also be the case of mental health problems As with humans, it is possible that our dog has a mental disorder that causes aggressiveness.

Dog aggression due to bad education

This is the most common cause of aggressiveness in dogs of all, caused by one or more human errors during the education / training process.

Many people do not bother to learn how to treat, educate, and train their dog. There are even people who teach them to be aggressive … seeing is believing.

Don’t make the mistake of teaching your dog to be aggressive, mean. Because that behavior will end up hurting you and him a lot.