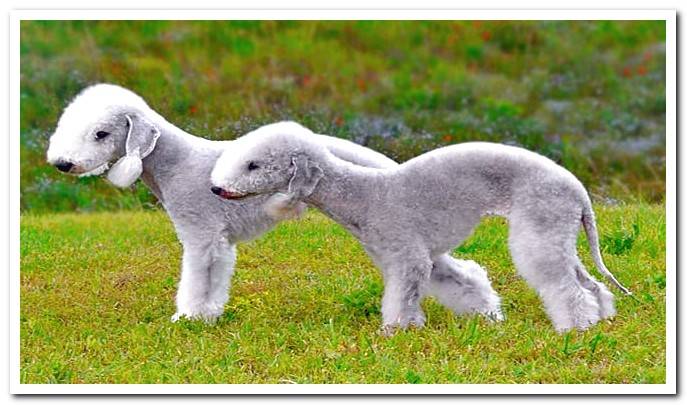 Despite its sheep-like appearance, the Bedlington Terrier is a very active, playful, and affectionate dog. Ideal for family environments including the presence of children.

Among its characteristics stands out the color of its hair, which, strange as it may seem, can sometimes be blue. From Dogsis we show you the complete information about this peculiar breed.

You may also like: Behavior of the Cirneco del Etna

Physical characteristics of the Bedlington Terrier

It is a medium-sized dog that usually surprises with its peculiar appearance. An adult male measures 39 to 43 centimeters at the withers and females 38 to 42 centimeters, with a weight that ranges between 8 and 10.5 kilos.

His body is vigorous and elegant, with long, muscular limbs. It has a narrow, pear-shaped or wedge-shaped head, covered by a curly, fluffy toupee, and a long jaw. Another of his curiosities is that he is the only Terrier with a body of curved lines.

This breed has large, well-defined nostrils, with a truffle that can be black or brown. Her ears are oval and fall to either side, with silky fringes of white hair at the tip. At rest, her expression is sweet and kind, with small, bright and sunken eyes.

As for the Belington terrier’s neck, it is long and deep at the base, without dewlap. His body is muscular and flexible, with a rather broad chest and flat, sloping shoulders. Feet are long, with thick, compact pads.

The Bedlington Terrier’s fur, which is thick and curly, can be blue, brown, or sand. Usually it is a little longer on the legs. Its coat is one of its main hallmarks. Finally, its tail is thick at the base and tapers at the tip. The Bedlington terrier has an average life span of about 12 years. 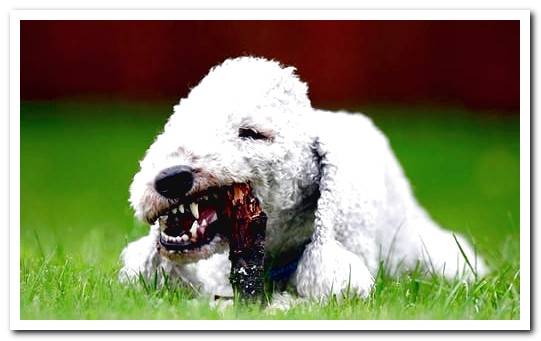 The Bedlington Terrier loves to play sports and run around the garden, as it is a very active dog with good muscular power by nature.

The blood supply whippet also makes it very lively when it comes to reacting. It is well adapted to living indoors, but you need to go for a walk several times a day.

It is a very playful, affectionate and obedient breed, although in some cases it can be stubborn. In general, the Bedlington terrier is an excellent companion, who loves to receive all kinds of attention.

It usually has a good relationship with children, making it a good option for families. If you must live with other dogs, the ideal is to socialize as a puppy so that there is no problem.

With strangers he tends to be initially reserved, looking for an observation post until he becomes confident enough. On the other hand, you should avoid leaving it alone for a long time, otherwise it will not develop properly.

What care does a Bedlington Terrier need?

For a Bedlington Terrier to look like we are used to seeing it in the photos, it is important to groom it carefully. How? Well, brushing it at least once a week and taking it with a stylist so that you can do your characteristic haircut.

It is a unique type of cut, which must be done with scissors and is quite complex. On the other hand, it is important to follow the vaccination schedule recommended by the vet and take it to regular check-ups to check that you are in good health.

As for his diet, you should know that it is difficult for him to assimilate foods with a high content of copper. Therefore, these should not be part of their diet. It is recommended to give high quality feed or natural food for dogs, which is called BARF food. In this way, the Bedlington Terrier is sure to be healthy and happy for a long time.

The Bedlington terrier is a crossbreed of Poodle, Whippet and Dandie Dinmont Terrier. Despite this, it is considered one of the oldest dogs in Great Britain.

In the 18th century this breed was already established in the Bedlington district, from where it takes its name. It was a dog that used to accompany English miners, as it was in charge of hunting rats in the galleries.

Like other Terrier dogs, it was also used by hunters to chase badgers, hares and foxes, due to its great agility and liveliness.

At the end of the 19th century, English high society began to take an interest in him and the Bedlington terrier began to change physically, taking on a more sophisticated appearance.

In addition, it crossed borders and began to have a presence in other countries such as the United States, Canada, Germany, France and the Netherlands.