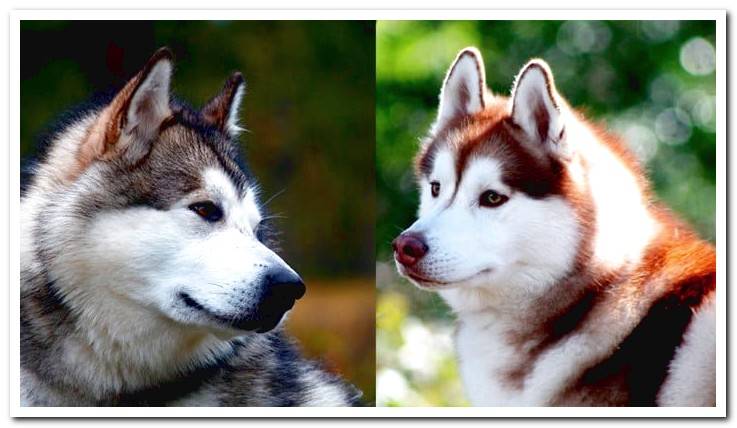 At first glance, the differences between Alaskan Malamute and Siberian Husky are not easy to establish. In the eyes of many people, these races look almost identical, as they share multiple physical and personality characteristics.

Despite this, we are dealing with two canine varieties, so differentiating them only requires a little knowledge and attention to detail. Do you want to know what they are? Do not miss the information that Dogsis has prepared for you!

The Alaskan MalamuteCalled Alaskan Malamute in Spanish, it is a snow dog used to pull sleds and fulfill other tasks in low temperature environments. Males measure 63.5 centimeters at the withers and females 58.6 centimeters; For this reason, it classifies as a large breed dog.

The Alaskan Malamute is a muscular dog. The breed has a strong chest, while the legs are firm. Its head is wide, it has a black or red truffle and its black lips are accompanied by a scissor-shaped bite. The eyes are almond-shaped and brown in color, while the ears are medium in length and triangular in shape.

The coat of the breed is double, thick and rough; the mantle grows more profusely around the neck. The texture is woolly to the touch, while the length varies in the different areas of the body. As for the color of the coat, it comes in multiple combinations: gray with white, black or silver areas distributed symmetrically. Also, some Alaskan Malamute dogs are completely white.

As with all dog breeds, personality depends on each dog and the socialization it has had. However, the Alaskan Malamute tends to be very friendly, approaches people with confidence and is always ready to play. It is recommended for people who enjoy outdoor activities and walks, as it needs a lot of exercise.

Like the Alaskan Malamute, the Siberian Husky it is a large sled dog. Furthermore, they share an unmistakable characteristic: they both have a wolf-like appearance. In general, a male Siberian Husky measures between 53.5 and 60 centimeters at the withers, while a female reaches 50.5 to 56 centimeters.

The Husky’s body is compact, strong and muscular. The breed’s head is medium and proportionate. The dog has a gray truffle, liver or meat, depending on the shade of the coat. The lips are black and hide a scissor-shaped bite. In addition, the eyes are almond-shaped and lively; meanwhile, the iris can be brown, blue or heterochromic. The ears, meanwhile, are triangular in shape and thick.

The coat of the Siberian Husky is double and of medium length, it is rough and woolly to the touch. The color combinations are varied, from white to black, through gray, liver, different shades of silver, among others; these colors are presented pure or in a symmetrical two-tone combination.

The Siberian Husky is an alert and energetic dog, he is not aggressive or suspicious of other dogs or people. In reality, his personality is usually friendly and playful, although breeders appreciate his showing a dignified attitude.

Now that you know the characteristics of both, have you found any differences between Alaskan Malamute and Siberian Husky? Maybe not, it’s really hard to tell them apart! To achieve this, look at the following details: