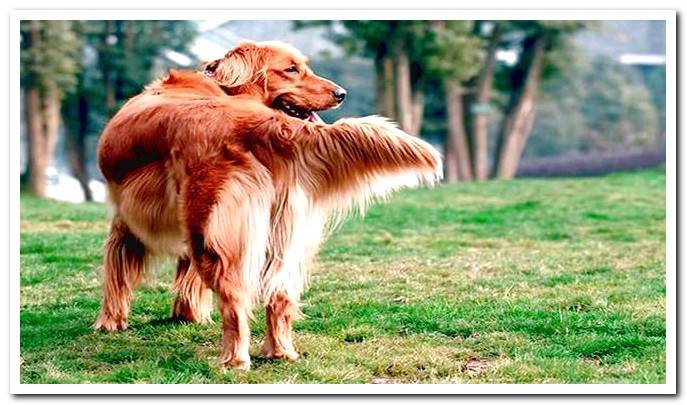 The tail is possibly the most expressive part of our dog, it can indicate its state of mind if we interpret its meaning correctly. It also helps them to relate to other dogs, through their own body language.

Do you already know why dogs shake their tails, raise them or hide them? We will review all the possible options in the movements of the tail of a dog and what is its meaning.

Why do dogs wag their tails? Tail raised and waved sideways

Many people confuse this type of movement with happiness, but it is not really so. It is a symptom of agitation, excitement, which a dog can possibly have when it sees its owner after several hours of absence, for example.

But it can also be a symptom of excitement in the aggressive sense, a nervous, agitated or unstable dog, it can also perform this movement. If we do not know the dog and we observe too much agitation, excitement … it is better to take measures or we can have a good nibble.

Related content  What is canine hyperkeratosis and how is it treated?

Obviously when this movement is done by our dog, the one who knows us and the one we know, the most likely is that he will wag his tail from excitement or nervousness but in its positive meaning, that is, an excess of joy.

Although there is also the possibility that you are in a state of alert or surveillance.

Why do dogs wag their tails? Tail raised and stiff, still

When our dog’s tail is raised but completely still, without movement, we must interpret it as an alert signal. This type of movement in the tail of a dog is very common, when for example our dog sees in the distance a dog with which he does not get along, with whom for whatever reason he gets along badly (by way of example ).

This signal indicates that our dog is tense, and that represents a possible danger. In many occasions with the tail high and still, they raise their heads and put their ears forward, challengingly. When our dog shows its tail like this, it is best to relax it or simply change places to relax, walk, etc …

Dogs that play with each other or even puppies, put their tails in this position on occasion without the meaning being negative. It is simply comfort when playing by stretching your tail.

Hunting dogs also often lift their tails and leave them still when they are very attentive to something, such as the fall of a bird or the appearance of an animal.

It does not mean that it will necessarily bite, or that there will be a confrontation or growling with another dog … but it is a symptom that we must interpret well. 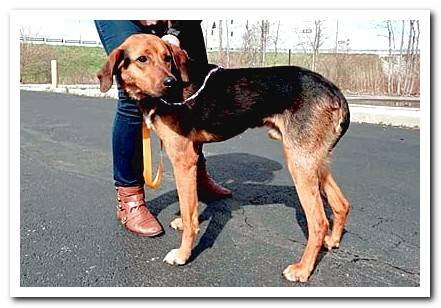 Why do dogs wag their tails? Tail lowered and tucked between hind legs

There is only one interpretation for this type of movement in a dog’s tail, fear. The more afraid you are, the more you will pick up your tail between your hind legs, sticking it from the bottom to your stomach as much as possible, our dog can shake if fear intensifies.

If we appreciate that our dog puts his tail between his legs, it is because for some reason he is afraid or senses that something bad can happen. For example, if we go for a walk and when we cross another dog, it hides its tail, it is because it is afraid of the other dog, of relating to it.

In these cases it is best to relax him, tell him to sit down and speak to him with total calm and serenity, to continue walking as if nothing had happened. Dogs detect our nervousness and if a scared dog sees us nervous, it will be even more scared.

Pain in dogs also manifests itself through its tail, if our dog has his tail between his hind legs, hidden, it is possible that he is suffering pain in some part of his body. 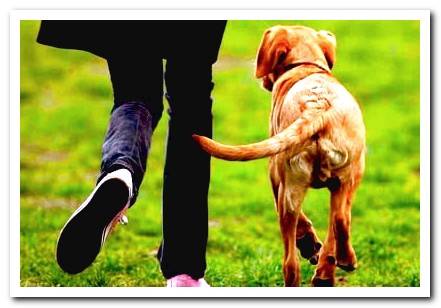 Why do dogs wag their tails? Tail medium or almost raised with lateral movement

This type of movement in the tail of a dog determines that it is happy and content, although it also shows us in some way its degree of excitement. It is possibly the most common tail movement among the canine world. Without a doubt, it is a joy for every human to see their doggy life partner be happy wagging their tails.

When our dog does some mischief and knows it, it can also approach us a little lazy and with this same tail movement. A mix between I have been bad, but I know you love me a lot and I am happy so I approach you very slowly but wagging my tail like that.

Why do dogs wag their tails? Tail drooping and still

When we see a standing dog, with its tail hanging and still, we are seeing a calm and relaxed dog, or a dog waiting but relaxed. It is the movement of the tail that indicates that it is relaxed, since when it is excited it moves it.

Related content  Vaccines for Puppies When to put them?

Since it does not hide it between its legs, we must interpret that it is calm. It is a very common posture, since there are many dogs that walk calmly with their humans with this tail position.

Do all dogs wag their tails the same?

Yes and no, we all know that there are many races that by their own genetics have their tails upright, but that does not mean that they are always in tension or in alert mode. It’s just that they have a tail like that, period.

They may also have suffered a mutilation of his tail We already know that there are many irresponsible people. If the tail is amputated, its movement cannot be predicted, even if it has a little left and moves.

These tail movements and their significance are generally attributed to drooping and moving tail dogs. Being a very healthy way of expressing itself with other dogs, in addition to helping them maintain balance. Let’s not forget that the tail is part of a dog’s spine.

If you liked the article and found it useful, help us keep the web going! : Give “Like” or Share it on social networks 🙂 Thank you!