The eyes of the dogs, externally, are quite similar to ours. Most of them are brown in all their ranges, although some dogs have them blue or amber and some specimens even have one eye of each color.

But sometimes, that hue of our dog is modified and turns whitish. We can detect a white spot or a kind of web or film that tarnishes the entire eye. Below we explain what white eyes are in a dog.

Most frequent symptoms of eye diseases

First of all, it should be noted that sometimes when dogs are falling asleep or even sleeping they can roll their eyes. In this case it is not due to any pathology.

It is nothing more than the closed eye that is seen when the eyelids are ajar, for some reason, generally the posture or the attempt to stay awake. Of course, it is not a health problem.

On the other hand, it is a sign of an eye condition to detect a whitish hue over the open eye. There are different situations, since a stain is not the same as an opaque film that totally or partially covers the eye:

What is the third eyelid in dogs?

It is a structure that can prolapse or partially or completely cover the eye, which gives the sensation that the dog rolls his eyes, as if the eye had turned inside the orbit. Is a third eyelid with very important functions. It is located in the inner corner of the eye, it is opaque and, normally, not visible.

It contains a lacrimal gland that is responsible for producing almost half the total volume of tears. There are several causes that can cause this membrane to exteriorize, such as eye pain, retraction of the eye, cartilage eversion or foreign body. We should contact the vet.

A pathology known as paresis of the third eyelid stands out. It consists of the protrusion of this eyelid over the eye. In some specimens it is a birth defect. It is not a problem at the clinical level. It would only have aesthetic importance in a dog that wants to present itself to beauty contests. Does not require treatment. 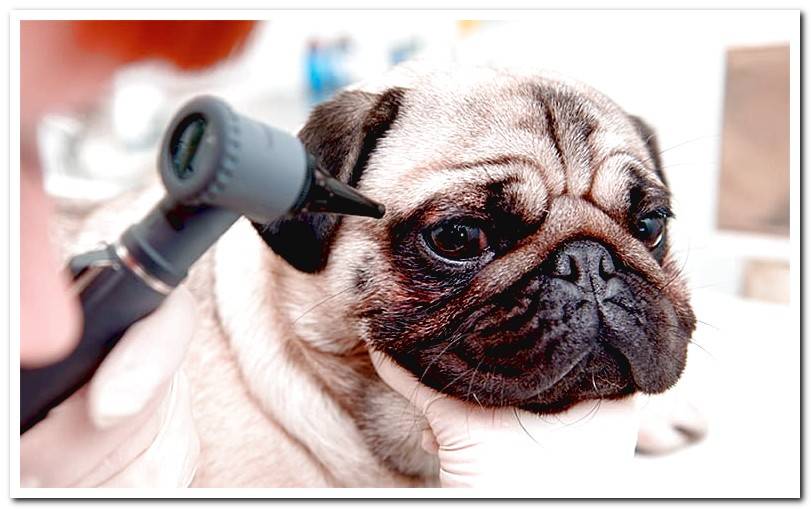 The cornea is the transparent part of the eye. It is covered by a superficial layer of epithelial cells and has a middle layer and an inner layer. Any injury causes a wound that causes inflammation of the damaged area.

This inflammation will sometimes be perceived as a blurred, opaque and whitish area on the eye. If we do not see the lesion but we detect a lot of pain, strabismus, tearing, light intolerance and the third prolapsed eyelid to protect the damaged eye, we should go to the vet. Rapid attention is needed.

Injuries affecting the cornea are more common in prominent-eyed dogs, such as Pekingese or Pug, although they can be suffered by all dogs, regardless of breed. The following stand out:

Appreciating a cloud over the eye may be indicative of keratitis. It is an inflammation of the cornea that causes it to cloud. There are also symptoms such as severe tearing, strabismus, light intolerance, or protrusion of the third eyelid. The dog will rub its eye with its paws.

There are various types of keratitis. They all have in common that, if not treated, they can end up causing partial or total blindness. Therefore, the visit to the vet is mandatory. We highlight these keratitis:

The falls will look like milky gray film to the eye. Although they are usually associated with aging, the truth is that there are also juvenile cataracts of congenital origin. These appear before the age of six and in both eyes, although they do not always arise at the same time. For its part, acquired cataracts are those that affect older dogs.

They are also those that appear as a complication of diabetes. East type of falls they start in the center of the eye and spread. The cataract is considered mature when the entire lens is opaque. Depending on each case, the vet will assess the need to operate.

What is nuclear sclerosis in dogs?

It is a physiological degeneration of the lens that occurs as a result of aging. It is not a pathology. It is because new fibers are continuously formed on the periphery of the lens that press towards its center. The result is a bluish haze that will not interfere with vision. Its
appearance makes it confused with the falls.

Glaucoma is a serious pathology that can cause blindness. It occurs when more aqueous humor is formed than is removed, increasing intraocular pressure. This increase can damage both the optic nerve and the retina.

Depending on its origin, a glaucoma primary, which is hereditary, and another secondary, the result of another disease. It causes pain, tearing, strabismus, hardness to touch, whitish gaze and a larger pupil. It is a veterinary emergency. In hours the dog could go blind. There is pharmacological treatment and surgery may be used.