This curious and peculiar breed of dog lacks hair on its body, except for the head where it usually has a small crest and the tail. And it is that the Argentine Pila has become famous thanks to these characteristics.

However, not only its appearance is attractive to many people, its tender and familiar character make it a great choice as a family dog. Super loving even with children. Do you want to know a little more about this breed? We tell you the most important thing 😉

How does an Argentine Pila behave?

The character of this breed of dog is docile and friendly, loyal and totally dedicated to its family, which is why it is defined as a perfect temperament for family environments. The Argentine Pila is happy and very playful, especially loving with children.

Despite your small size and big heart, it will also do guard dog work, warning us with its barks if it appreciates something strange or an intruder. 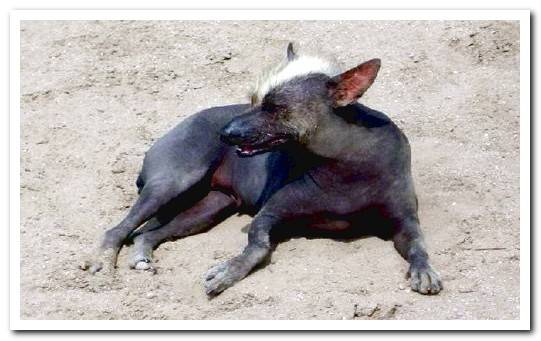 There are three varieties of Argentine Pila according to their size: small (between 25 and 35 cm in height at the withers), medium (from 35 to 45 cm) and large (over 45 cm). His athletic body allows him to run, jump, and even climb the walls.

On the Pila’s head stand out his large eyes, bright and very expressive, whose color always matches that of the skin. The muzzle is short, while the ears, set high, are constantly moving. The same can be said of the tail, with its characteristic curved shape.

Its fur is smooth, soft, elastic and warm to the touch, although it is only a sensation, since its temperature is the same as that of other dogs. It can be presented in a wide variety of colors.

The Argentine Pila has no hair

The total absence of hair is one of the most notable characteristics of the Argentine Pila. Some specimens have a total alopecia, while others exhibit plumes of hair of different lengths on the head, tail and even legs.

On other occasions the Argentinian Pila can present a fine layer of fluff all over its body, which does not constitute a true coat. Lack of hair is due to genetic factor of this breed that, among other things, also determines the lack of some teeth.

How to care for your skin

As in all races that lack hair, skin care is of utmost importance for the health of the Argentine Pila. We must bathe him regularly and check your skin, especially vulnerable to mosquito bites.

Avoid excessive sun exposure or at least apply protector when our dog goes for a walk on hot days. Similarly, it should be sheltered on cold days, as it is especially sensitive to low temperatures.

How to educate an Argentine Pila?

In general, the Argentine Pila is an easy dog to train, as long as we use training methods of positive reinforcement and avoid too severe corrections.

You hardly need any training to be a good companion and watchdog, always alert but non aggressive, a task for which this breed seems to be perfectly endowed with innate form.

How is the health of the Argentine Pila breed?

Except for its delicate skin, the Argentine Pila is one of the healthiest and most resistant dogs in the world, free of hereditary diseases that do affect other races.

The main problem he suffers from is skin cancer, so it is important to go to the vet at the slightest symptom or suspicion.

For the rest, it is an extremely long-lived breed: the Argentine Pila can reach live easily up to 20 years and even more.

Although it can sometimes seem like a lazy and sedentary dog, the Argentine Pila actually really enjoys playing and exercising. Some daily walks will be enough for you to spend your excess energy and feel fulfilled.

The Argentine Pila has a marked tendency to put on weight, reason why it is necessary to control its diet. On the other hand, in his last years he usually loses almost all teeth, so it is necessary to adapt the type of feeding to this circumstance.

History of the Argentine Pila

The origins of the Argentine Pila are very old, since its presence in America has been attested for at least 3,000 years. Experts believe that could be descendant of the Peruvian Hairless Dog, although it also has many physical similarities with the Aztec Dog.

The chronicles of the first Spanish conquerors in South America explain that it was a breed of dog highly valued by the Incas, a power symbol. Later, at the beginning of the 20th century, it became popular in Argentina, where it developed definitively.

Until relatively recently, the Argentine Pila was hoarse, a very peculiar feature in a dog. Its hoarse and silent bark has been gradually corrected by breeders and today is able to bark like any other dog.

Origin of its name

It was precisely in Argentine lands where the Pila acquired its definitive physical characteristics and where it received the name by which it is known today. It was the Creole peasants from the northwest of the country who baptized it like this referring to her bare skin.

For decades, the Argentine Pila was used as a watchdog and as a remedy for rheumatism, since there was a belief that contact with its hairless and always warm skin alleviated the symptoms of rheumatism and other ailments.

You may also like: When to shelter a dog