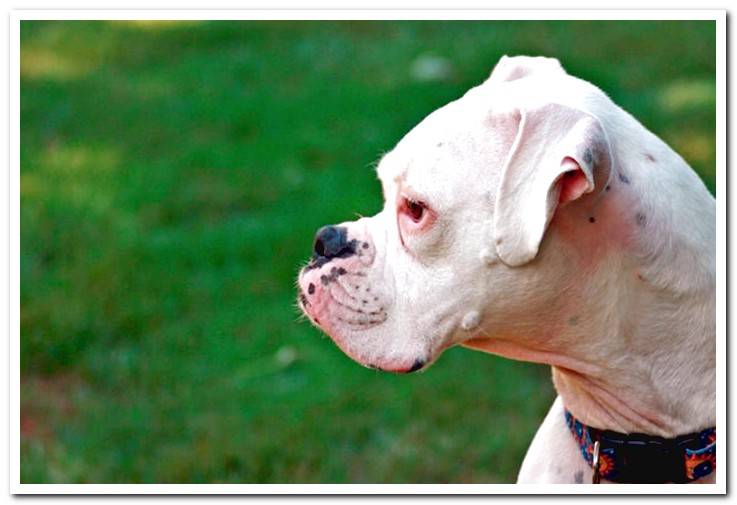 Do common Boxer specimens look beautiful to you? Well, wait to meet the White Boxer. This variety is part of the breed, but its characteristics do not go unnoticed.

In fact, there are many beliefs about these dogs. Let’s see in detail everything related to the precious albino boxers, what special care they need and their curiosities.

Origins of the White Boxer

There is evidence that specimens of this color appeared alongside the first Boxers. In fact, four white dogs participated in the first show of the breed in Munich. Over time the breeders considered that they were not acceptable within the standard and they could only get pedigree those who had less than a third of the surface of their body free of this hue.

There are several versions of what caused the White Boxers not to be admitted. One of them is that during the first half of the 20th century these dogs were used as a police dog. However, light-colored ones were easily seen at night, alerting thieves to the nearness of the law. So, since they were not as useful for this work, they were left out of the standard.

Other experts claim that were ruled out as they were considered to be more likely to develop congenital problems. This has some scientific support, but it is not a determining factor, since 75% of White Boxers are born perfectly healthy. 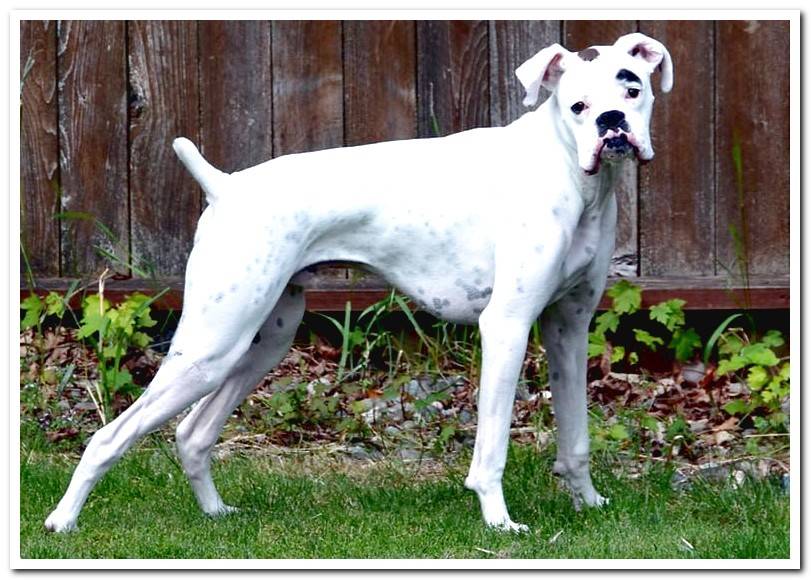 Differences between a White Boxer and an Albino Boxer

White Boxer dogs are often confused with Boxer specimens with albinism. However, they are not the same. White Boxers have the same physical and character characteristics as those with a brindle or fawn tone and are only differentiated by the color of their coat.

Albinos, on the other hand, are born with a genetic defect that prevents them from generating melanin. This substance is responsible for color in pigmented areas of the body, such as the skin, hair or iris. This makes are much more sensitive to solar radiation and who have vision problems such as strabismus or light phobia.

Also, the lack of pigmentation in the inner skin of the ear atrophies its nerve terminals in this area of ​​the body. The result is that a large percentage of the Albino Boxers are deaf.

It is easy to detect when a Boxer is simply white and when it is albino. The latter will have pink skin and no pigmentation marks on the mantle, truffle, lips or legs. Your eyes will be a very light bluish hue. The simplest way to detect if a boxer is white or not is to look at the tip of his muzzle: if it is colored it is not an albino.

Debunking some myths about the White Boxer

Over the years numerous myths have arisen about the drawbacks of having a White Boxer. Most have no scientific basis and are nothing more than inventions. Let’s see:

Without a doubt, all these beliefs have their origin in the similarity between the White Boxers and the Albinos. But there are certain precautions that you should take if you decide to adopt a specimen with a light coat.

The characteristics of the coat of a white horse are similar to those of other dogs of the breed. They lose very little hair during the year so one brushing per week will suffice. During the moult, which is usually in spring, the fall intensifies, although not excessively. In these times you should brush them every other day to make sure that their cloak maintains its shine.

Its white fur makes them more sensitive to sunlight, so you should take them out for a walk with a protector if the heat is very intense. In this sense, direct exposure for more than 30 minutes is discouraged. Like all specimens of the breed they have a tendency to suffer wounds or scrapes if they get into areas with a lot of brush, due to their short hair. They can also suffer from skin allergies.

To detect any hearing problem in a White Boxer puppy you must wait at least until the first month of life. Being still very small, if you call him it is very likely that he will not answer you, because he does not know what it means. What is indicated is to leave them for a long time in a quiet room without shrill noises. When everything is completely silent, he suddenly knocks on the door to see if they react.

If you have any questions, ask your vet to examine him. A healthy White Boxer is, in short, a formidable life partner who will be by your side at all times and who will not care in the least about the color of your skin.