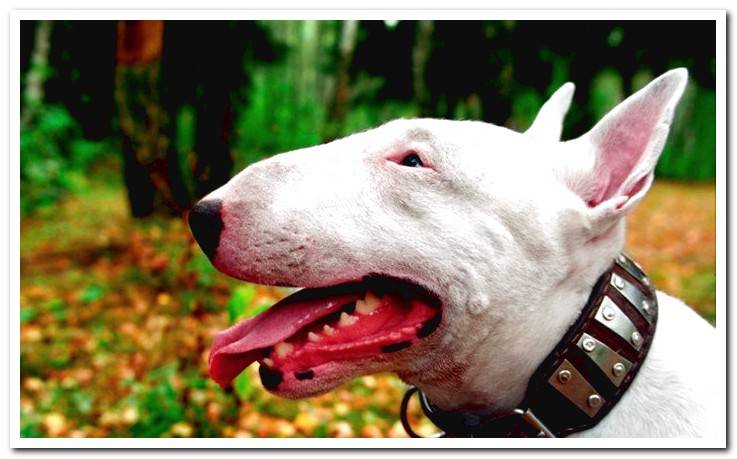 It is one of the easiest breeds to identify and it is that the English Bull Terrier has a very characteristic long snout, which together with its almond-shaped eyes give it a unique personality.

There are two variables of this breed, the Bull terrier and the miniature Bull terrier. Let’s see what are its main characteristics and the care you need to keep it healthy and happy.

We are talking about a medium-sized, compact and muscular breed that has a pure bank coat, brown, black or mottled. It stands out for the physiology of its head, which presents an elongated snout without depressions.

His eyes are always dark, being admitted in the standards of the breed the color black and brown. They are almond-shaped or triangular, somewhat small in proportion to the head.

Its ears are triangular in shape, elongated and erect. Body compact and generally very muscular with a medium-sized tail and not excessively thick. 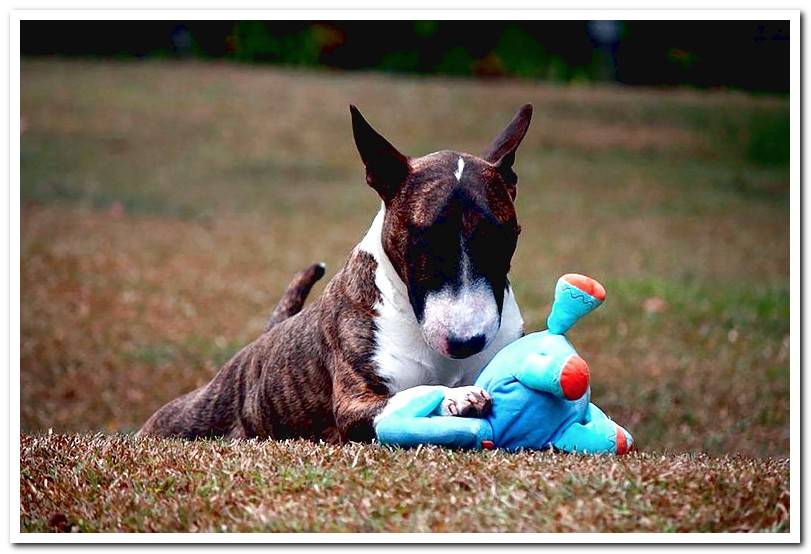 How is the character of an English Bull Terrier dog?

Those who share their life with some of these precious ones already know that it has a very special character, since the English Bull Terrier is very docile and affectionate with his family, but distant and suspicious of strangers.

At home he will be one of the family, he loves to play and be pampered. Requires being part of the family in all activities, leading badly enough to be left alone or isolated.

Although it has a docile temperament with the family, we must be careful with children, since this breed does not tolerate blows well, even if they are accidental. This breed is very intelligent but also somewhat territorial, so it is recommended to socialize it since it is a puppy.

He will only get along well with other dogs that respect him, otherwise he will become somewhat aggressive. We insist that does not like blows or sudden movements, reacts badly to them. So it is advisable to teach him how to control his bite. 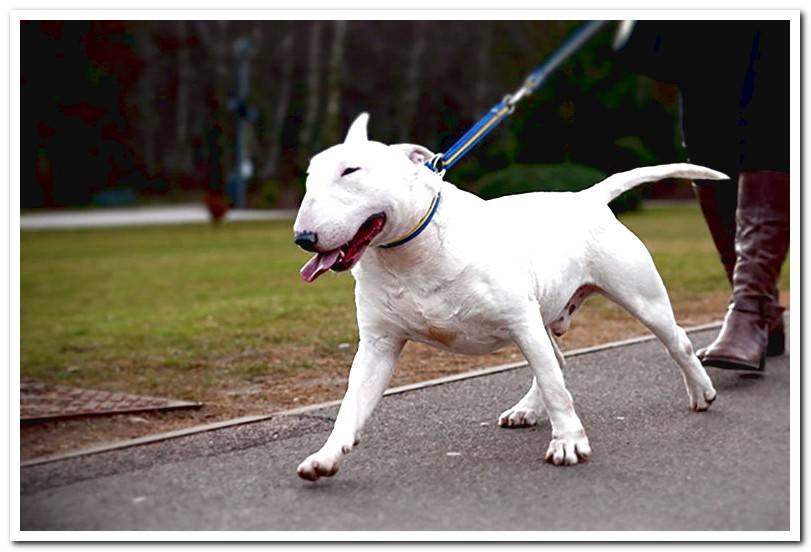 Despite being a very strong and muscular dog, during the cold seasons it is advisable to use some warm clothing since its fine coat of hair will not protect it completely, especially when it freezes or snows.

Her hair hardly needs care, brushing from time to time will be enough to remove dead hair and avoid knots. Incidentally, much of the possible dirt it may have is also removed.

Although it is a great watchdog, it is recommended that you live inside the home, since loneliness does not go with your lifestyle. It is a very familiar dog.

We must take care of his diet to prevent him from becoming overweight, since he is a real glutton. A diet based on fresh natural products is the most recommended, although we can also choose cereal-free industrial food.

Related content  How is an English Pointer? Characteristics, temperament and care

The English Bull Terrier requires large doses of exercise to feel fulfilled, so it is advisable to take him out for a walk several times a day and to exercise at least once a day (you can join us for jogging, cycling, etc …). 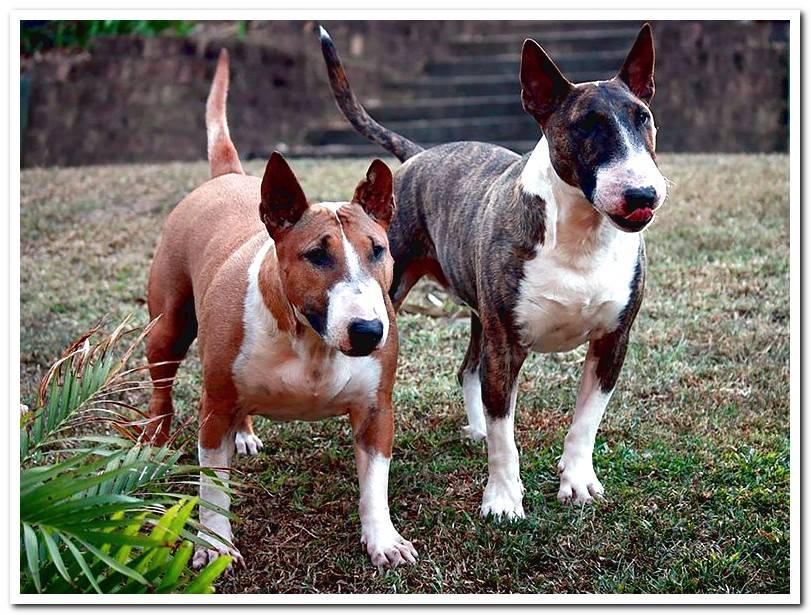 How is the health of the English Bull Terrier breed?

Unfortunately this breed is very predisposed to suffer different pathologies that it has been genetically inherited. Therefore, a strict vaccination schedule is absolutely mandatory. In addition to periodic veterinary reviews.

That’s right, veterinary spending is assured, although it is a lesser evil if we take into account all the virtues of this breed. Some of
the most common diseases of the English Bull terrier are:

Is the English Bull Terrier a potentially dangerous dog?

There is great confusion about whether or not the English Bull Terrier is considered as a Potentially Dangerous Dog (PPP) and therefore requires a special license in order to have it.

In Spain the English Bull Terrier is not considered a potentially dangerous dog, although some autonomous communities do not share this criterion, so we recommend you check with your town hall.

But in other countries like Mexico, if it is considered PPP. So depending on where you live, you should consult the legislation of your country on this type of animal. 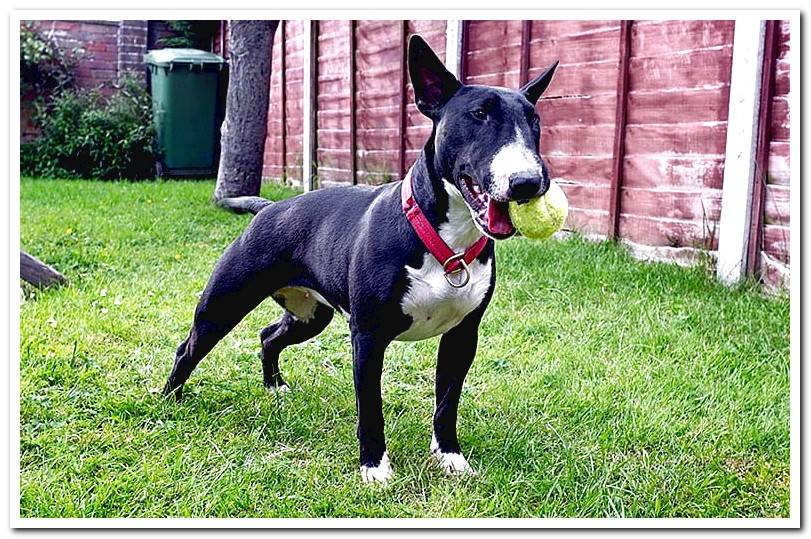 The miniature Bull Terrier is for all intents and purposes the same as the normal version, with the same character and temperament, in addition to the same needs for education, socialization, food and health.

Physically it is identical except in weight and size, it is simply a smaller version of the English Bull Terrier, but it retains all its essence. In Spain, the miniature Bull Terrier is much more widespread than the original Bull Terrier.

The history of the English Gull Terrier breed is not a very pretty one, as when bull fighting was banned in Britain in the mid-19th century, a new fad began to spread, dog fighting.

This breed was originally created as a fighting dog, looking for specimens insensitive to pain and with great physical resistance. Was the servants James Hinks who developed this breed from crosses and selection of different breeds (among which the Dalmatians are rumored to be).

With the passing of the years and the prohibition of dog fights, he moved to second place occupying a surveillance post, as a watchdog. Over time, he has been socializing and is currently a good companion dog, without neglecting his duties as a watchdog.

If like us you are passionate about this wonderful breed, you will surely enjoy seeing the incredible photos of English Bull terrier dogs that we leave at your disposal.