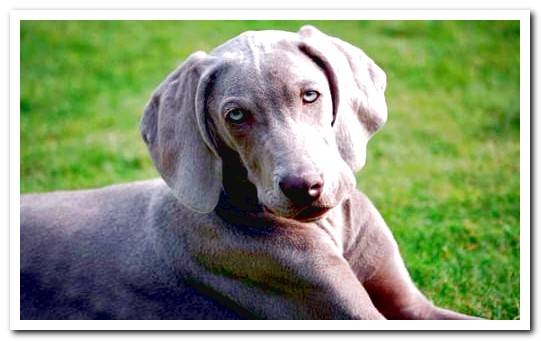 TAlso called Weimaraner, the Weimaraner is a dog with a spectacular style and physique. Of German origin, its name is due to Duke Charles Augustus of Saxony, born in Weimar.

This breed is also commonly known as “gray ghost”, due to the peculiar color of its fur which houses different shades of gray.

It is a breed used for many generations as a hunting dog, however today it has been perfectly adapted to family life, making it an excellent roommate.

The Weimaraner’s character is loyal, protective, loving and energetic. He will get along great with both the older and younger ones at home, as he loves to play.

His behavior at home is exemplary, knowing how to stay calm and somewhat playful, but on the street he becomes a super active dog who loves to run, play and exercise.

This breed does not like to be alone at home, if it goes long hours without company it is likely to bark excessively or even acquire a destructive behavior (biting things, breaking, due to anxiety).

As a negative point we can mention that they are a little stubborn, stubborn. And although they are very intelligent, if they do not want to do something … they will not, even if they know perfectly how to do it.

The Weimaraner is large, its weight in adults varies between thirty-five and forty kilos, although the females weigh slightly less. It has a height at the withers of up to sixty-five centimeters.

His body is slender, muscular and robust. Its head is long and well proportioned, with wide and long ears always hanging. The color of their eyes is variable, from the blue that the puppies show to the amber or chestnut of the adult specimens.

Its legs are strong and resistant, prepared to turn the Weimaraner into a fast and agile dog.

There are two types of Weimaraner:

The color of the Weimaraner can vary in hue within the gray, giving it a velvety appearance. It may not be uniform gray because the head and ears are often lighter in color than the rest of the body. In fact, some specimens have some white spots on the chest or legs.

The education of the Braco de Weimar

As with other breeds, we must invest time in their socialization as a puppy, to avoid acquiring fears or inappropriate behavior in front of other dogs or people.

As it is a stubborn breed, it is advisable to start with the basic education sessions from a young age, from three or four months of age we will be able, with a lot of patience, to teach him simple things.

From the year of life, we must intensify their training to avoid stressful situations, such as escaping or not obeying on certain occasions. It is a very intelligent dog, so applying good canine training technique we will get good results quickly.

What care does a Weimaraner dog need?

Being a breed with hunter genes, you will love going for a run and having fun outdoors, especially if we go hiking in the mountains or take a walk in a good park.

Although it behaves well at home, on the street we must let it completely release all its energy and care, it is not a breed that tires easily. From the age of six months we can even make it accompany us to run.

The Braco de Weimar is a very familiar, he needs to be in contact with the family constantly and feel part of it, that is why he should never be lacking in cuddling and caresses, especially for the little ones.

Their hair requires two or three weekly brushings, some more if the specimen is long-haired. Although a monthly bath will be enough to keep it clean, except when it goes out into the bush and there is mud … in which case, it will touch a bathroom.

At the health level, the Weimaraner is a healthy dog ​​that does not require great care, a good diet, its corresponding vaccines and a routine veterinary check-up will be enough to keep it healthy and happy.