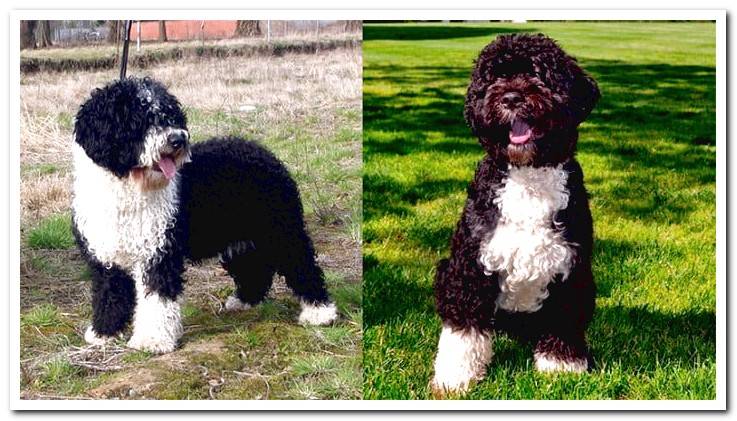 There are several lines of water dogs and each of them has its own characteristics, although some are difficult to differentiate at first glance. The differences between the best known Spanish and Portuguese water dogs are the weight and the coat, although there are also other characteristics that allow them to be distinguished.

Are you thinking of adopting a water dog and don’t know which variety to choose? Here are the characteristics and differences between the Spanish and the Portuguese water dog.

Characteristics of the Spanish water dog

As its name implies, this water dog is originally from Spain, where it is raised as a shepherd. The exact time of its arrival on the peninsula is unknown, although some theories claim that it was brought by Muslims from North Africa.

As for the body size, it is medium, rustic and harmonious. It stands out for its muscular build, although without looking heavy.

The eyes are oblique and expressive. The color of the iris varies in different shades: brown, chestnut and hazelnut. The coat is curly, short and woolly, forming cords when rolled. The coat comes in various shades: solid white, black or brown; bicolor in combinations of black and white or white and brown.

He is a playful, loyal and work oriented puppy. You can train it without much effort, because it learns quickly and is very intelligent.

Characteristics of the Portuguese water dog

The portuguese water dog It is native to the Algarve, from where it spread to the entire territory of Portugal during antiquity, although the exact moment of history is unknown.

This dog was a crucial element in Portuguese fishing, since it was used to recover fish. For this reason, it is a breed designed for the job.

The Portuguese water dog is medium, muscular and straight in shape. The eyes are rounded and slightly separated, the iris is black or brown, surrounded by eyelids in the same tones.

As for the coat, it is abundant and grows in two ways: long and wavy, or short and curly. In both cases, it lacks an inner layer. Long-haired dogs have a matte and soft coat, while the long variety is dull and with closed curls.

Like the Spanish water dog, the Portuguese coat can be unicolor or bicolor. They share the same tones mentioned, with the difference that the Portuguese’s skin is black with bluish hues.

He is very athletic and loves outdoor activities, especially going swimming and playing in the water. He is obedient, easy to train and very smart. In addition, it has excellent sight and smell.

Differences between the Spanish and the Portuguese water dog

As you may have noticed, these two breeds share many characteristics, such as their ease of training and their personality. However, they also present elements that differentiate them:

These are the differences between a Spanish and a Portuguese water dog. Which one will you adopt now?