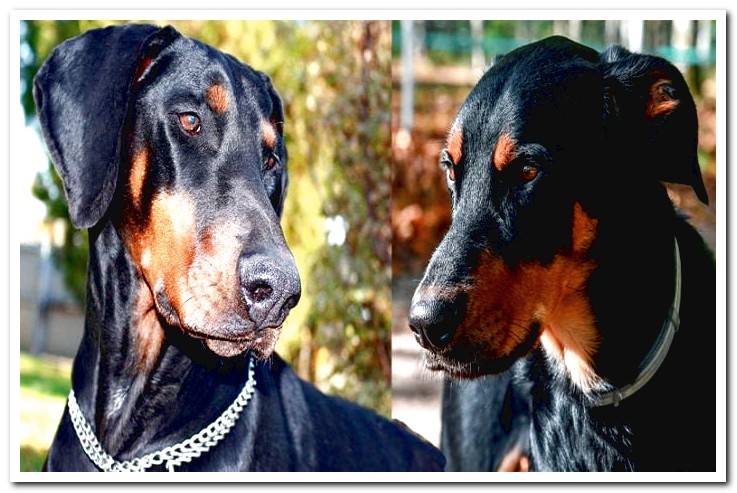 Recognizing the differences between the Beauceron and the Doberman is quite a challenge, as these breeds have very similar appearances and can often be confused and confused.

Medium, robust and imposing, these dogs transmit power and are a bit intimidating, which is why they are used as guardians. Also, both are very faithful to their masters. Do you want to know their main differences? Let’s go there!

The Beauceron It is a dog originating in France, where it served as a guard dog, rescue and companion animal. It is a muscular dog of large size, it measures between 64 to 69 centimeters at the withers for males, or 60 to 67 centimeters at withers for females.

The breed features a long snout, raised and pointed ears, dark oval eyes and a scissor bite, accompanied by dark lips.. The tail is low insertion, but very long and with medium length hair. In general, the appearance of this dog is wolfish.

The coat is smooth and very thick, it is shortened in the area of ​​the head. As for the color of the cloak, it presents a combination of black with fire, or a harlequin fur.

Contrary to what its appearance inspires, the Beauceron is a loyal and loving dog with its masters. Training him is not complicated, his intelligence allows him to learn quickly and well socialized he gets along perfectly with people and other pets.

It is common to hear that the Beauceron is a dangerous dog, but this is due to its tendency to suffer from stress when raised by punishment. Maltreatment makes him an aggressive and suspicious dog, so it is advisable to train him alongside a canine trainer and using positive reinforcement.

Before you know the differences between the Beauceron and the Doberman, you also need to know what the characteristics of the latter are.

The Doberman He comes from Germany, where he was raised as a watchdog, police and hunter. It is a large breed, measuring between 68 and 72 centimeters at the withers for males, or between 63 and 68 centimeters for females.

This dog presents a muscular and elegant body. The head is wedge-shaped, it has a scissor bite and the ears fall towards the cheeks, while the eyes are oval and dark irises. The lips of the breed are pigmented.

The Doberman’s coat is smooth, short and hard. The cloak features a combination of black or dark brown with fire.

This dog is also smart and loyal to his family. In fact, he does not like to be alone at home, this leads to the development of destructive behaviors. He is sensitive and affectionate with his own, although he distrusts strangers; however, this characteristic allows it to develop as a good watchdog.

Like the Beauceron, it requires good socialization and training to avoid unwanted behavior. The aggressiveness observed in some specimens of this breed is also the product of negative training based on violence.

How to tell the difference between a Beauceron and a Doberman

Defined the characteristics of each breed, these are the points that will help you differentiate them: