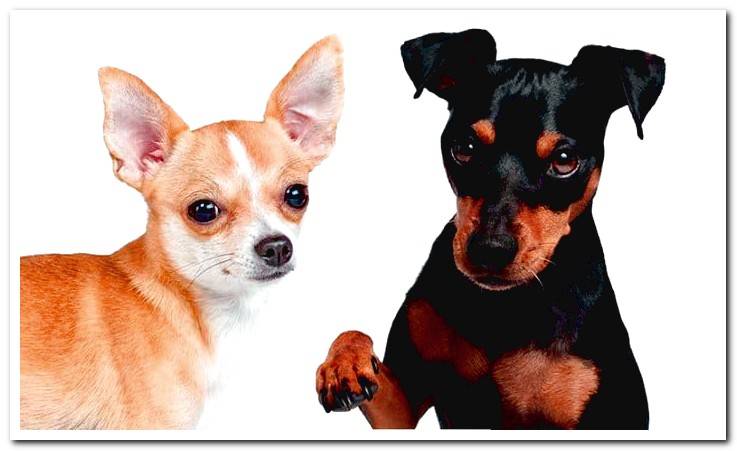 The differences between the Pinscher and Chihuahua breed are not evident for some people, especially if we talk about the short-haired Chihuahua. Both dogs belong to small breeds and their coats have similar colors, although there are indisputable details that allow one to distinguish between the other.

Do you want to become a specialist in differentiating these dog breeds? Let’s see what are the main details that will help us differentiate them. Ready @?

Features of the Miniature Pinscher

The Miniature pinscher It is a relatively recent breed, since records of it date back to the beginning of the 20th century, when it was bred in Germany. It is a small version of the German Pinscher, the males and females reach between 25 and 30 centimeters at the withers.

It has a square body with an elongated head and a flat forehead. The truffle is black and the scissors bite, while the eyes are oval. The ears have a straight V shape, they fall towards the dog’s cheeks.

As for the coat, it is very bright, short and closed, it appears in two modalities: unicolor in shades of red, reddish brown or dark brown, or bicolor with a mixture of black and tan.

Characteristics of the Chihuahua toy

Before knowing the differences between the Pinscher and Chihuahua breed, it is necessary to know a little more about this dog of Mexican origin. The body is a little square, but the shape of the head is similar to an apple.

The Chihuahua It has truffles of various colors, the muzzle is short and the bite can be pincer or scissors. The eyes, meanwhile, are round and very expressive. As for the ears they are large and V-shaped, they stand out with tips pointing away from the head.

The coat of this breed can be short or long, but only the short variety can resemble the Miniature Pinscher. This coat is very close to the body, it is even quite scarce in the throat and abdomen. It is possible to find Chihuahuas in all shades, either single-colored or in a combination of various colors.

Main differences between the Pinscher and the Chihuahua

To find the differences between these two dog breeds it is necessary to pay attention to these details: