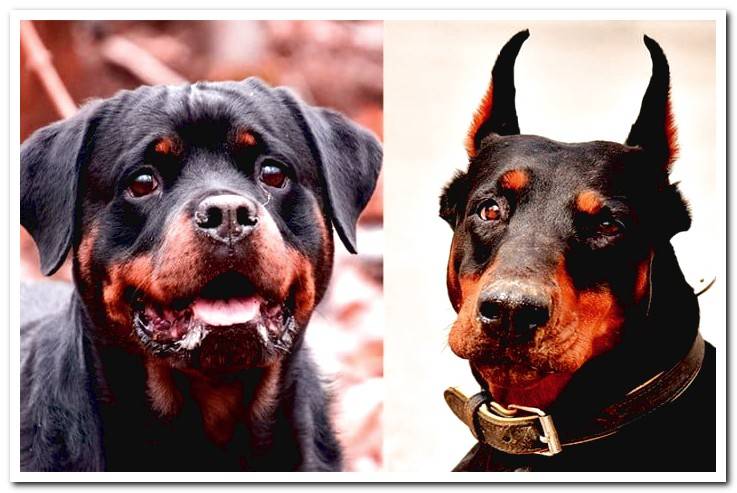 The differences between Rottweiler and Doberman are difficult to establish with the naked eye if the most important points that distinguish them are unknown. Although both breeds are similar, there are several details that allow this to be easily established, such as the heavier and more robust build in one of the dog breeds, and the variations that occur in the shades of the coat and nose.

Do you want to know all the secrets to differentiate these races? Become a connoisseur and do not miss the information that Dogsis has collected for you. Let’s see it!

Characteristics of the Rottweiler breed

The head is medium, it presents a marked and black truffle. The muzzle is straight, this dog has firm black lips; in addition, the breed has a scissor bite. The eyes are almond-shaped with dark brown irises, while the ears are triangular and high set.

The Rottweiler it has an outer coat and undercoat. Both the inner and outer coat are hard and thick. The colors that the breed presents are black with fiery markings on the face, neck, chest and legs.

The Rottweiler’s personality is affable with his masters and others when well socialized, although he can be possessive and abrupt if he is not trained as a puppy. It is a good watchdog and loves physical activity. It is recommended to provide daily and varied exercise to avoid boredom.

Characteristics of the Doberman breed

The Doberman is a dog originally from Germany, where it was used in hunting. Its body is medium and muscular, it stands out for its agile and arrogant bearing. Males measure between 68 and 72 centimeters at the withers, while females reach 63 to 68 centimeters.

The head of the Doberman It has a wedge shape, its wide nose can be brown or black. The muzzle is long and has a scissor bite; lips are black or brown. The eyes, meanwhile, are oval, the iris can be black or brown This will depend on the shade of the coat. The ears are inserted on the sides of the skull and fall close to the cheeks.

The Doberman has short, smooth and dense fur, its coat appears in two varieties of colors: completely black, or dark brown with reddish markings on the face, throat, chest, legs and thighs.

This breed is alert and protective, it excellently fulfills the functions of a watchdog. He loves to exercise with his owners, as he is an active and playful companion.

How to tell the difference between a Rottweiler and a Doberman

As you have observed, both races present similarities in terms of their physical appearance and personality. However, there are several details that allow us to establish the differences between Rottweiler and Doberman: