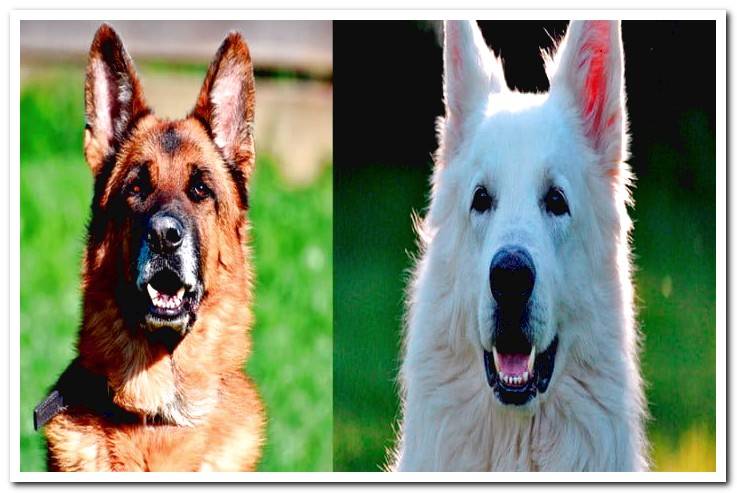 Shepherd dog breeds share many similarities in size, appearance, and character. However, there are clear differences between German Shepherd and Swiss Shepherd that will allow you to recognize them at first sight.

And not only because of the color of their hair, since the Swiss Shepherd is completely white while the German Shepherd is mostly black and tan (brown). Other physical differences will also help us clearly differentiate them.

Physical characteristics of the German Shepherd

The German Shepherd is a large, stocky dog, characterized by a proportionate and strong musculature. Males measure between 60 and 65 cm, while females reach between 55 and 60 cm at the withers.

The German Shepherd’s eyes are almond-shaped and are usually black, just like his muzzle. The ears are straight and pointed, while the muzzle is elongated.

This dog can have a long or short coat. As for color, you surely know the most popular combination, called saber: a mixture of black with reddish areas. However, there are also black and white German Shepherds with a mixture of these two colors, which you will see in the Panda Shepherd.

The Swiss White Shepherd and the German Shepherd present some similarities: both are medium-sized dogs, with pointed ears, long snouts and their coats can be long or short.

As for the differences, the size of the Swiss Shepherd is a little different: the males measure between 58 and 66 cm at the withers, while the females measure from 53 to 61 cm. Thus, the largest male German Shepherds, but the Swiss females outnumber the German.

Another difference from the Germans is the shape of the back: that of the Swiss Shepherd is straight, while the body of the German has a slight inclination near the rump.

As for the eyes, those of the Swiss Shepherd are also almond-shaped, but the iris appears in various chestnut tones, surrounded by eyelids with black edges.

Although the length of the coat is similar between both dogs, the coat of the Swiss Shepherd is only white. The coat is double and, in some cases, undulates towards the tips.

Character and personality of the German Shepherd

The German Shepherd is a protective and loyal dog. Thanks to his intelligence, he is capable of making decisions in moments of tension and has a natural tendency to please his masters. In addition, he is brave, attentive, and acts as a good watchdog.

This breed is very active and requires frequent physical exercise to be healthy and happy.. It develops well during obedience-based training and positive reinforcement.

Thanks to all these characteristics, the German Shepherd has been trained for decades to serve as a service dog.

Character and personality of the Swiss White Shepherd

Differences between German Shepherd and Swiss Shepherd are rare when it comes to personality. In the Swiss Shepherd you will also notice an active, protective and loyal character to his family. He develops a lot of devotion towards his masters and they try to please them.

In addition, he shares with the German his love for physical exercise and outdoor activities. For this reason, it requires daily outings and games. The Swiss Shepherd is also easy to train, as it stands out for its intelligence and its ability to learn commands very quickly.

The most notable difference in the character of both dogs is that the Swiss Shepherd, despite his friendly tendency, is often suspicious of strangers. For this reason, it is not as efficient in making decisions in new or stressful situations.

Why are these two races so similar?

As you may have noticed, there are few physical and character differences between the German Shepherd and the Swiss White Shepherd. What is this about?

In reality, both races are related, since the Swiss descends from the German. Even during the 1930s, the Swiss White Shepherd was considered to be an albino version of German and was not liked by his upbringing.

Nowadays, however, the Swiss variety has established itself as a separate breed with defined characteristics.