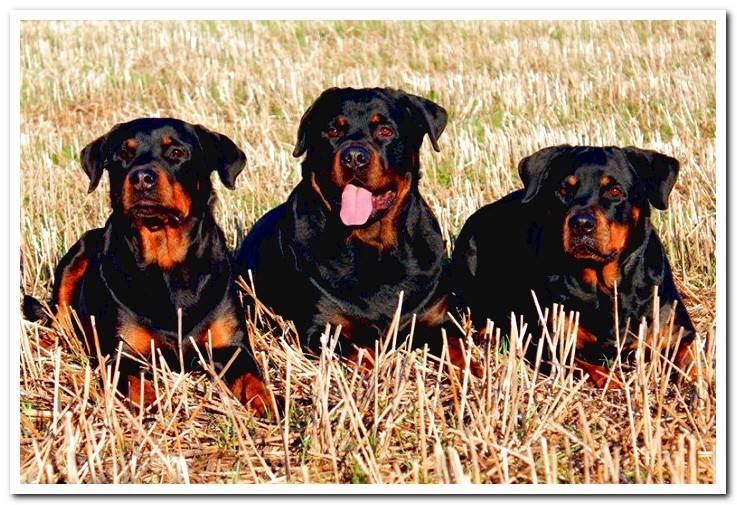 The Rottweiler breed is one of the best known and is usually divided into two varieties. Before adopting one, you need to know the differences between the American and German Rottweilers.

It is a strong and muscular breed that descends from the mastiffs that accompanied the Roman Empire. However, its appearance today was developed by breeders in Germany. Do you want to discover everything about the Rottweiler varieties? Let’s go there!

The International Cynological Federation (FCI) and the American Kennel Club (AKC) Rottweiler identified as German-bred dog breed. However, its origins are ancient, since from the domain of the Roman Empire it was used as a protection animal and a sheepdog.

As the Empire advanced in its conquests, the Rottweiler accompanied it. In this way, the breed began to spread to other areas of Europe, where it was also crossed with native dogs without human intervention.

Thanks to these crosses, the breed took the form for which it is known today. Further, It took the name of the Rottweiler region, where it appears for the first time with the characteristics that it preserves until today..

Being a working dog, the Rottweiler developed great musculature, strength and endurance. After centuries of dedicating themselves to herding and protecting their masters, from the 20th century it began to exercise as a police dog.

Characteristics of the German Rottweiler

The Rottweiler is a robust dog, its size varies from medium to large. Despite its massive appearance, it has agile movements and is fast.

The coat has a double coat: the outer layer is medium in length, hard and thick, while the inner layer is softer. As for color, the Rottweiler is a black dog with reddish or fiery markings on its muzzle, throat, chest, tail, and limbs.

The Rottweiler has a confident and confident personality, which is why it is excellent if you are looking for a guard dog. Despite his imposing figure, he is affable with his masters, obedient and docile after a good workout.

You need to have time to play and go out with your dog, as the Rottweiler does not tolerate loneliness; she loves to socialize with different people and pets. In addition, perform training based on positive effort; otherwise, your dog will develop aggressive tendencies.

What are the differences between American and German Rottweilers?

The differences between the American and German Rottweilers lead to a first question: does the American Rottweiler exist? Many people doubt whether it is a separate breed. Further, neither the FCI nor the AKC register variations of this breed.

In addition to this, there is no canine club in the United States that sets the standard for the American variety. In Germany, by contrast, there is the Allgemeiner Deutscher Rottweiler Club, in charge of strictly monitoring the reproduction and breeding of this dog.

Although a consensus has not been reached, there are some characteristics in the american dogs of this breed. Through these characteristics, it is possible to list the following differences between American and German Rottweilers:

Despite these differences, it is not yet possible to establish that they are different varieties of the same breed. Actually, The increase in proportions is very likely due to the fact that there is no club that controls the breeding of the breed in the United States.. As a result of this, the different copies of Rottweiler would be crossed by their owners with dogs of other breeds, which entails notable external changes.