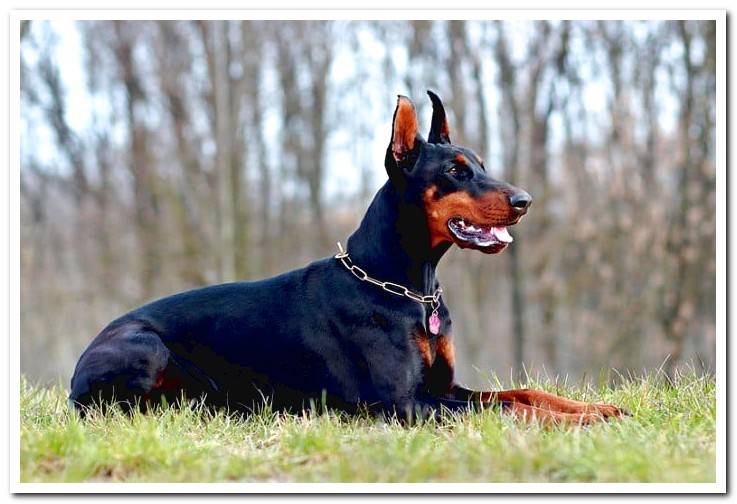 Doberman dogs are impressive animals. Very successfully a few decades ago, after a period when their number in households fell, today it seems that they are experiencing a rebound.

His strong image and even, for some people, fierce, causes numerous prejudices to circulate against him. Below we will review some of its peculiarities so that we can have a better knowledge of the breed.

Curiosities of the breed

His life expectancy is around 12 years on average. It is a large dog with a weight between 30 and 40 kg, while its height at the withers is about 65-69 cm. Females are generally smaller. Its coat is short and requires little care.

It is an animal that adapts to urban life and that prefers temperate climates. It is convenient that they receive good obedience training, for which they will be good students. We must pay attention to their contact with other dogs because some may not get along too well with their kind due to their strong temperament, although it cannot be generalized.

Why is this dog called Doberman?

The name of this breed originates from its creator, the German tax collector Louis Dobermann. This man crossed dogs belonging to breeds like him rottweiler, the German pinscher, the weimaraner, the english greyhound and the Manchester Terrier to get a copy of this new breed.

What is the origin of the Doberman?

Although it does not seem so due to its appearance and current lifestyle, since we usually see it as a guard dog or company, the doberman dog is a direct descendant of German hunting dogs, some hounds characterized by having an exceptional nose.

Why is it not necessary to cut the Doberman’s ears?

Although the image of dogs of this breed has been associated with severed ears, the truth is that there is no need to mutilate the animal like this. The cut is due only to an aesthetic criterion. Luckily this amputation is currently prohibited, being the owners, breeders or veterinaryns who carry it out fined.

Ear cutting is no minor matter. This part of the canine anatomy performs important functions in terms of communication. By amputating them, in addition to causing considerable pain during recovery, we are preventing the dog from communicating effectively with its counterparts.

Is the Doberman a dangerous dog?

This question is an example of the effect that social prejudice has on dog breeds. Dobermans are not a priori dangerous, no more so than any other race of similar complexion.

Its appearance, remember that modified by the cut of the ears, together with its use as a guardian has served to create a beast image which is not real, because dobermans can be very loving and docile dogs.

Therefore, it is not the image of the dog that makes him dangerous, but the education he receives. The Doberman breed is not included in the list of potentially dangerous dogs from Spain.

The Doberman dog and the cold, good allies?

Due to its identification as a guard and defense dog, there is a belief that its ideal accommodation is outside the houses, in the care of farms or companies. If we live in temperate climates year-round we may be able to keep our Doberman outdoors. But only in that case.

Dobermans, in general, they can’t stand the cold well, so your ideal environment will always be the interior of homes. If they had to stay outside, it is essential that they have some good care, a good refuge where to shelter from the cold and other inclement weather.

Can Dobermans live with children?

The social image of the race has influenced this aspect. Seen as a dangerous, fierce and guard dog, none of these characteristics would make it suitable for living with children.

But this is nothing more than a stereotype that does not have to be related to reality. A socialized dog and well-bred you will establish a good relationship with all the members that make up your family, be they humans, dogs or other animals. Once again we must insist that what is important is the treatment the dog receives and not its breed.

Of course, children must in turn be well informed about the treatment they should be given to animals and in no case, no matter how good the dog or the relationship between them, we must neglect surveillance.