It is a French breed that enjoys great popularity in its country of origin. Its ancestors are the famous eastern mastiffs, although it has ancestors such as the English bulldog, the great dane and the mastiff.

The Dogue de Bordeaux is a noble and brave dog, excellent guard dog very attached to his family. His simple presence makes many criminals feel intimidated, he is reserved with strangers, very observant.

As a curious fact, the Dogue de Bordeaux is one of the breeds that were used to create another known breed, the Pit bull.

What is the character of the Dogue de Bordeaux?

The Dogue de Bordeaux is calm and has a stable personality. He is observant and of instinct guardian. Is not a potentially dangerous dog according to Spanish state legislation. Although there are Spanish autonomous communities that have classified it in such a way, so we must inform ourselves previously.

Before adopting it, it is convenient that we are informed about the applicable regulations in the place where we live.

It should be noted that the dogue de bordeaux is not dangerous in itself but it has a large physique and is a very strong dog. So if this breed is unlucky enough to fall into the wrong hands, it is clear that they can become dangerous due to their qualities and courageous character.

With a good education and giving him affection and affection, he will be a noble and patient companion of life. The dogue de bordeaux has confidence in himself and is not altered to a minimum. Nor is it a breed that gets used to barking too much.

With his family he is kind, kind and loving. However, with strangers something distant can be shown. With other animals it gets along quite well. And although he is an intelligent dog, he does not always obey because he is stubborn. 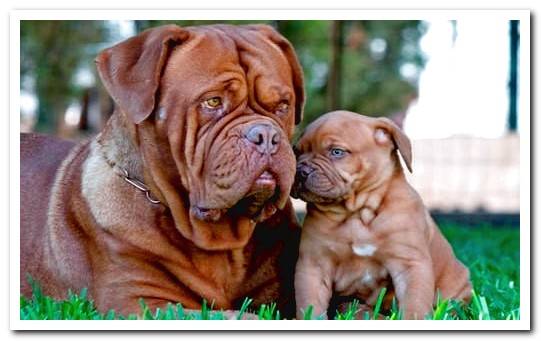 The dogue de bordeaux is a large dog, whose weight is around fifty kilos in adulthood. Its shapes are rounded.

Its large, strong and imposing head stands out, with folds in the skin. The jaw is prominent and the muzzle is short.

As for his eyes they are light brown and oval in shape. The ears are medium in size, always hanging. It has a strong body, with a wide chest. Its limbs are robust.

The Dogue de Bordeaux’s hair is short, silky, and reddish / copper in color (multiple shades of both colors are supported).

How to train a Dogue de Bordeaux dog

It is important to start with their education from puppy, gradually since until four or five months of life we ​​should not propose anything serious, just let them enjoy.

It is essential that we socialize him as a puppy so that he does not react badly if we have visitors at home. Males are more dominant than females, so we must be firm and not lose our cool.

For education to be effective, there is nothing better than using positive reinforcement and giving it rewards when it does well. You will learn fast if we do it this way.

As the Dogue de Bordeaux is a playful dog, it is a good idea to educate him through games. It will be difficult to handle due to its size as an adult. For this reason, it is best to start as a puppy.

For the training of our furry to be successful, it is not necessary to give up easily but to stay constant, stock up on goodies and be clear about our role as leader of the pack.

What care does a Dogue de Bordeaux need?

Our Bulldog will be a big eater. You can eat up to a kilo of food daily, depending on your size and age. So it is a breed that requires a significant investment.

It requires medium activity and it is better to go for a walk with him several times a day, without doing intense physical exercise. The best way for him to release his energy, though, is by playing with other dogs.

The bulldog is a breed that drools a lot because the muzzle skin is loose. In fact, the folds it has on the skin often cause irritations, which will force us to take care of it to avoid infections.

It is much happier in houses with large gardens than in small apartments, this breed requires large spaces to feel free.