The inflammation that occurs inside the mouth is known by the name of stomatitis. There are several causes that explain its appearance, such as a foreign body or diseases of the gums.

In any case, we must know that it is a very painful pathology. It will prevent the dog from feeding normally and, in addition, it may also be indicating that the dog suffers from some systemic disease such as diabetes.

Stomatitis it is an inflammation that affects the oral mucosa, gums and tongue. This inflammation will have different origins. It may seem like a minor problem, since it is local, but it is essential that, with the slightest suspicion of stomatitis, we seek veterinary assistance.

This is because it is an especially painful pathology. It affects the dog’s quality of life, making it difficult for him to feed, drink or even swallow saliva. In addition, it may be due to the presence of chronic diseases that it is essential that they also receive treatment.

Why is stomatitis triggered?

Most cases of stomatitis are due to so-called periodontal diseases, which are processes that affect the gums and teeth. Another possible cause is the presence of foreign bodies that become trapped between the teeth or around the tongue. 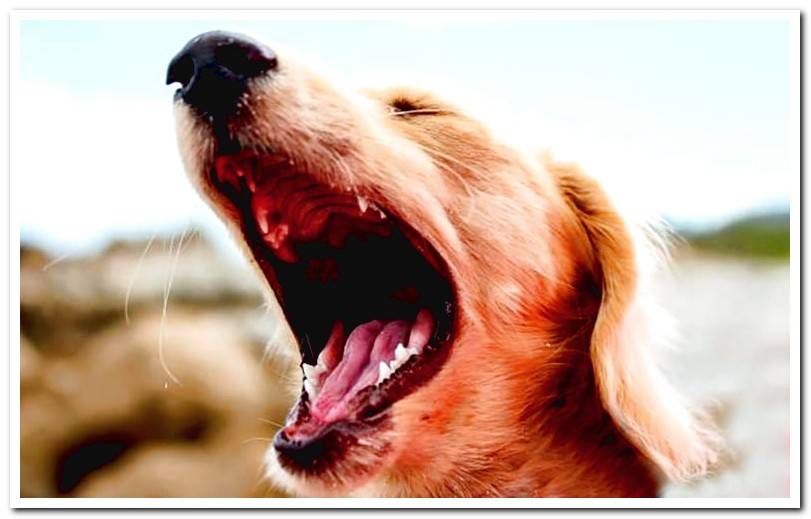 Although a veterinary review is usually necessary to diagnose stomatitis, there are a series of symptoms that can put us on alert. They are the following :

Not all stomatitis are the same. It is possible to differentiate them into various types depending on their fundamental characteristics. In the following sections we explain the most important ones.

It is also known by the name of Vincent’s trench mouth or stomatitis. Its distinctive feature is the extreme pain it causes. There are various bacteria involved in its development. The smell that is going to give off the dog’s mouth will be very unpleasant.

The saliva becomes very viscous, has pus and a brownish coloration. If we get to see the gums we will notice them very red and bleeding. Also, there are wounds. It can be triggered by periodontal disease.

It is called thrush or oral yeast infection. This case is less frequent. It appears more commonly in dogs that have been on antibiotics they have also removed normal bacterial flora. This causes yeast to proliferate.

The same happens in the case of dogs with a weakened immune system, generally because they already have some chronic systemic disease. What is typical of this stomatitis is that the gums and tongue are covered with soft white spots that end up joining together. Painful ulcers also develop.

In this case we will find lesions in the mouth in places where there is continuous contact with the mucous membranes of the lips or gums. It may be due, for example, to a broken tooth or that shows an irregular edge that favors this friction. Bacteria, but also fungi, are identified when growing.

What is the treatment for stomatitis?

The first and fundamental thing is to locate the cause behind stomatitis. If there is an ongoing periodontal disease, the treatment will go through a thorough cleaning of the mouth. This is done with the dog under general anesthesia and is used to remove tartar or damaged teeth.

They are also going to be prescribed antibiotics to control bacterial infections or to prevent them from complicating the picture. Furthermore, pain relievers may be required to alleviate the severe pain.

When stomatitis is caused by yeast, an antifungal will be prescribed. This can be administered topically or systematically. Finally, if stomatitis has been caused by a disease such as those mentioned, that is, diabetes, hypothyroidism, distemper, etc., it is essential to treat it.

Home care for a dog with stomatitis

In some cases, following the veterinaryn’s instructions, we will need to disinfect the dog’s mouth at home. Chlorhexidine diluted once or twice a day is normally used for this. The solution is poured onto a good piece of cotton wool and carefully passed all over the inside of the mouth, including teeth.

You also have to pay special attention to food. We will have to change the usual menu for a bland diet, almost liquid, to facilitate intake. For sale we will find cans with wet food formulated for convalescent dogs.

They can be diluted enough to be administered by syringe. Another option is to make homemade porridge. Likewise, it is considered beneficial to supplement with niacin. Of course, always with the veterinaryn’s prescription.