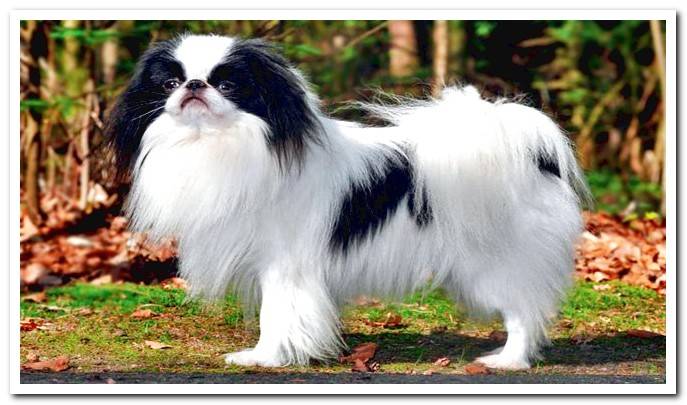 The Japanese Spaniel, also called simply Chin, is a small and delicate breed of dog, but elegant and very intelligent. Today it is considered one of the best companion dogs in the world.

It is a very communicative dog, although not a barker, with a very curious way of expressing itself that has been described as a kind of “talk” based on moans and small grunts. Cheerful, affectionate and intelligent, the Chin has the ability to dazzle people.

History of the Chin breed

For centuries the Japanese Spaniel has been considered an aristocratic dog, used to accompany and have fun to members of the imperial courts of the Far East.

Although it is originally from China, it was in Japanese lands where this breed evolved to reach its current appearance and outline the characteristics for which it is known throughout the world.

For centuries it was considered a kind of sacred animal in the land of the rising sun. Stealing or harming this dog was punishable by death.

How is the character of the Japanese Spaniel?

Naughty and playful, the character of the Japanese Spaniel is without a doubt and in short, very funny Although he is distant with strangers and sometimes quite stubborn.

His behavior is often reminiscent of cats: he loves to perch in high places and spends long times licking his paws and grooming himself.

It’s a dog very sensitive to changes that occur in their environment and the emotions of the people with whom they share their lives.

In fact, the Japanese Spaniel is shaping his own personality according to what happens around him: if he lives in a calm and sad home, he will become reserved; If you live in an active home instead, you will be involved in the action.

The loyalty of the Japanese Spaniel is beyond question. The Chin loves family life, especially the company of children. What’s more, being permanently dedicated to your loved ones can end up suffering the call separation anxiety, which negatively affects their character and behavior.

With a height at the withers of between 20 and 27 cm and a weight that can vary between 3 and 5 kg, the Japanese Spaniel falls within the category of small dogs or toy.

In its small and compact body, a large head stands out, with a snub-nosed muzzle, “V” -shaped ears and large, dark, prominent and widely separated eyes.

His hair is long and very fine, with the appearance of a down. Very silky to the touch. It highlights the dense collar that looks on the neck and chest, the strands of the ears and the tail plume, which curls on the back.

The color of the Japanese Spaniel’s oelo can be completely white or black and white, and may also have red or tan spots. 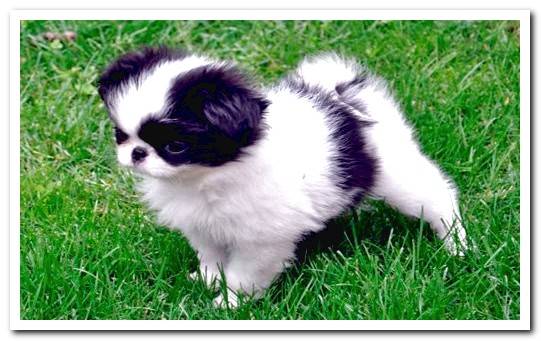 Education and training of the Japanese Spaniel

The training of the Japanese Spaniel can be a little difficult and requires great amounts of patience and perseverance on our part. The training process should be started at four months old, always with soft and fun sessions. If not, there is a risk that the dog will get bored and lose interest.

Maybe you think that educating a Japanese Spaniel puppy It can be complicated, but trust me, with patience and making it look like a game, you will learn much faster than you imagine.

Other times, for no apparent reason and despite our efforts, the Chin is stubborn and completely closed to our orders and indications. When this happens it is better to quit and try to train him again later.

However, if we manage to overcome these difficulties, this type of Spaniel is capable of working hard. to please us. When they do it wrong, it is enough to raise the tone of voice a little to reprimand them, but never go too far with our scolding.

Health and care of the Japanese Spaniel

The Japanese Spaniel is, in general terms, a healthy dog ​​that does not require too much attention beyond what should be had with any kind of dog.

The bones of the Japanese Spaniel are fine and brittle, even when it comes to adult dogs, so avoid too abrupt activities and prevent possible falls.

Its size makes it perfect for living inside a house, even if it is a small apartment. The average life span of the Japanese Spaniel is around 8 and 10 years.

Like all dogs, the Chin needs its daily dose of fresh air and exercise, always moderate. A couple of walks daily will be enough to keep you happy and healthy.

In addition to exercise, it is advisable to control your diet, since you have tendency to be overweight. It does not withstand heat well either, so in summer it is always best to keep it in cool places and to ensure that it never lacks water, to avoid a heatstroke.

The Chin is a generally very clean dog that does not need to be bathed too often. Once a month is more than enough.

However, it is advisable to spend some time cleaning and regularly checking ears, teeth, gums and eyes, in order to detect the presence of fungi and prevent infections, to which this breed is very prone.

You may also like: Small Dog Breeds or Toy