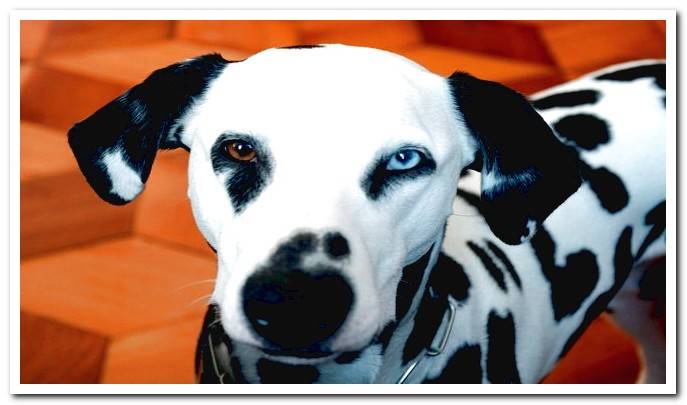 Is there anything more curious than the fact that your dog shows one eye of each color? For many it is considered a genetic defect, but the truth is that heterochromia does not compromise their vision at all.

Some races have a greater predisposition to develop it and there are several legends around it. If you want to delve into the causes and particularities of this ophthalmological condition, from Dogsis we explain everything.

Is it exclusive to dogs?

Heterochromia is not a disease, but a more recurring physical condition in cats than in dogs, although cases have also been reported in horses and even in humans.

The existence of one blue and one brown eye is closely linked to the production of melanin, which is the substance responsible for pigmenting the skin, hair and eyes.

Therefore, depending on the coloration and quantity in the iris of the protective cells of this melanin (the melanocytes), this curious ocular attribute will take place or not.

Genetic inheritance is decisive in its development, since the so-called merle gene is the cause of the absence of pigmentation characteristic of blue eyes, as well as the butterfly pigment in the nose of dogs.

Likewise, this gene is responsible for the white spots around the eyes, albinism and that in the breed Siberian HuskyDespite being a breed with no merle fur, partial heterochromia flourished.

Typologies and causes of canine heterochromia

Iridium heterochromia is classified as total and partial. The total is more common in breeds such as the Australian Shepherd, the Husky and the Catahoula leopard.

It is distinguished from the partial one in that the totality of the iris is of a different color from that of the other iris (one blue and the other brown). In Australian sheepherders we must add amber to the blue and brown tones.

The partial, meanwhile, consists of one of the irises shows fragments of the coloration of the other eye, being more usual in the Pembroke Welsh Corgi or in the Border collie.

Regarding the triggering agents, it should be noted that this ophthalmological condition may be due to congenital and, consequently, hereditary or acquired causes, including certain diseases (glaucoma, uveitis or neurofibromatosis), injuries caused by foreign bodies, exposure to certain medications or bleeding.

In turn, within hereditary causes it is worth adding Waardenburg syndrome. These are several joint conditions that cause deafness, as well as light hair, skin and eyes. It is usually more common in dogs with white fur, as is the case of the Harlequin great dane and the Dalmatian.

You should know that congenital causes are not serious or special care on your part. However, the pigmentation changes that have occurred throughout your pet’s life do demand a veterinary visit to determine and tackle the injury or pathology that generates it.

Does it affect the dog’s vision?

When we talk about genetic heterochromia (from birth), you can be sure that this physical quality will not interfere with the optimal vision of your pet. The state of the retina and the optic nerve are the only ones responsible for good or bad vision, the color of the iris does not treasure this capacity.

There are some conditions associated with pigmentation, such as pigmentary glaucoma, in which its detection can only be diagnosed through a complete ophthalmological examination.

You should control or restrict exposure to ultraviolet radiation if your dog has also eyelid depigmented, as they can be more sensitive to light.

A pathology surrounded by legends

For many years this condition has fueled a multitude of legends that give it a certain mysticism. For some the brown eye watches the Earth while the blue does the same with the sky. For Eskimos, dogs with heterochromia are faster.

In short, if your dog has an eye of each color, you should not worry, since it does not require specific care or implies that your pet sees poorly. You can simply boast of having the unconditional company of a friend only one in the world.