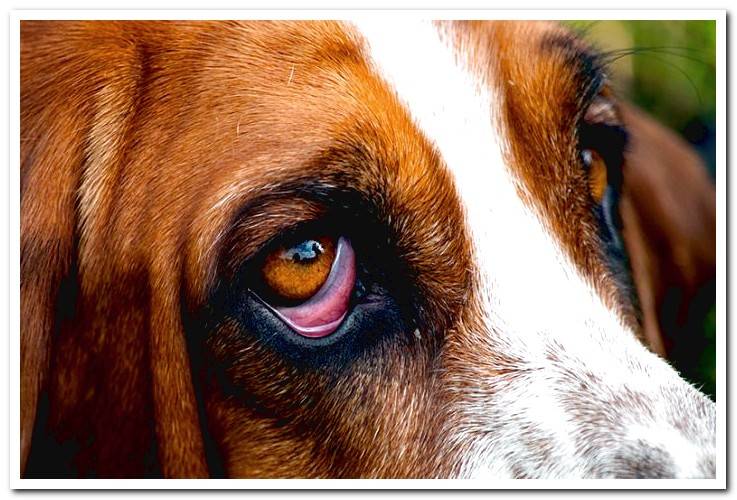 Ectropion, in a nutshell, could be defined as the eversion of the lower eyelid. It is due to different causes depending on whether it is a congenital defect caused by an alteration in the genes or, on the contrary, it is an acquired problem.

Ectropion is an anatomical alteration that can cause eye disorders, since the affected eyes will be more exposed to any external aggression. In the most serious cases, the vet will have to intervene surgically. Let’s see in detail from Dogsis.com everything related to canine ectropion.

Ectropion is defined as eversion of the lid margin and lower eyelid that can be identified in some dogs. Everting means turning or rolling up. In other words, what happens is that the lower eyelid is turned outward.

The formation of a kind of pouch can be observed that makes the eyelid become pendant and, therefore, separates from the surface of the eye, showing the eyeball, the conjunctiva and the third eyelid, which remain hidden in the absence of ectropion. It normally occurs in the central part of the eyelid.

What are the causes of ectropion in dogs?

In some races ectropion is presented as a birth defect due to alterations in some genes. These genetic modifications cause an incorrect development of the eyelids. Its hereditary component seems safe, so it can appear in more than one dog of the same family.

For this reason, breeding with affected specimens of ectropion is not recommended. In addition to genetics, there are times when ectropion appears as a consequence of some other health problem or, simply, due to an advanced age.

What breeds are most prone to ectropion?

This condition can appear in any dog, but is more common in breeds with loose or hanging skin on the face. For example, the ectropion of some hunting or water dogs stands out, such as the hounds or spaniels. But, also, the very popular suffer ectropion Saint Bernard.

Great Dane, Bullmastif or Newfoundland are other breeds that are most affected by this eye defect. Further, older dogs lose tone of the facial skin and therefore may also show ectropion as a consequence.

Side Effects of Ectropion in Dogs

The modification produced by the ectropion at the palpebral level allows that, in the lower part of the eye, there is a greater exposure than usual of the ocular conjunctiva. That is, areas that should be completely covered by the lower eyelid and, therefore, protected, with the ectropion become perfectly visible.

In this way the eyes are exposed to irritating agents that can end up producing eye infections or lesions on the cornea. Furthermore, since the defect persists, these become chronic. Recurrent conjunctivitis stands out, but also inflammation of the cornea or keratitis. In the most severe cases, keratitis causes blindness.

The most common symptoms that are seen in the eyes with ectropion are, in addition to conjunctivitis and problems in the cornea, constant tearing, also known by the name of epiphora, and problems derived from the poor distribution of tears throughout the eye. An example of the latter case is keratoconjunctivitis.

Before a dog with ectropion we must differentiate two situations. First of all we have dogs with mild ectropion, which are characterized by not suffering any other symptoms. These cases will not need treatment. At most, greater eye hygiene with saline is recommended to hydrate and clean the exposed area.

But, in a higher percentage of cases, dogs with ectropion will show eye problems or too pronounced eversion. So it will be necessary to repair the defect. The operation, which, of course, has to be carried out by the vet, consists of tightening the eyelids..

It is a simple operation, but it always has to be done by a vet ophthalmologist or, at least, with experience in ophthalmology. It consists of removing a wedge of tissue from the lower eyelid and joining the resulting edges. In this way, the skin of the eyelid becomes tight again, correcting the defect.

Ectropion vs entropion: what’s the difference?

Given the similarity of both terms and that both refer to eye disorders, it is not surprising that there is confusion between ectropion and entropion. But they are simple conditions to distinguish if you look at the definition. So if the ectropion was the eversion of the lower eyelid, the entropion consists of the invagination of the palpebral border.

Invaginate means, in this case, that the edge of the eyelids turns inward, causing damage to the eyeball. It is a very common birth defect in breeds such as Shar pei or Chow chow and can affect both eyelids. Requires surgical correction.