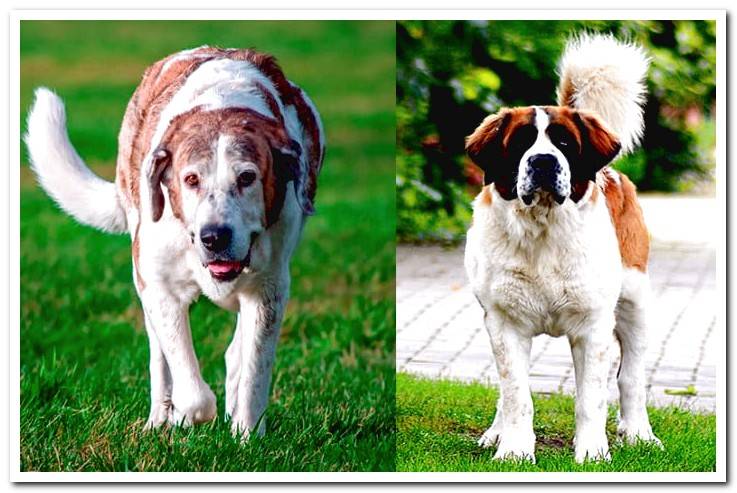 Establishing the differences between Mastín and San Bernardo is not easy with the naked eye. They are both large dogs with a heavy appearance, drooping bellies and a pleasant expression; In addition, there are several types of Mastiff, all with different physical characteristics. However, there are some tricks that will help you know which dog you are facing.

The coat, the shape of the head and the height are key pieces to find the differences between Mastín and San Bernardo. Let’s see in detail how to differentiate these two breeds at a glance.

Characteristics of the Spanish Mastiff

The head of the Spanish Mastiff It is wide and strong. It has a large black truffle, a color that it shares with the mucosa that makes up the lips. The muzzle is straight and slightly rectangular in appearance, but without being pointed. The jaw, meanwhile, presents a scissor-shaped bite. The eyes are small, almond-shaped and dark, accompanied by black eyelids that look droopy when the dog is resting. Also, the ears are triangular and droopy.

The coat of the Spanish Mastiff is thick, bushy and of medium length. It is common for strands to lengthen around the neck, back, tail, and legs, where it is also more rustic to the touch. The color of the cloak is white, accompanied by a dark mask on the face, in addition to irregular spots spread throughout the body.

This is a breed of protective personality, it is very suspicious of strangers. However, with its owners this dog is tame and calm, so it integrates perfectly as a member of a family with children.

Characteristics of the San Bernardo

The head of the Saint Bernard It is imposing and majestic, it has a square and black nose. The muzzle of the wide breed, lips of black mucosa were observed, in addition to developed and slightly drooping belfos. The shape of the bite can be scissor or clamp. The eyes are medium and sunken, they have well pigmented black eyelids and irises that vary between brown and hazelnut. The ears, meanwhile, are wide and high insertion, fall to the cheeks.

The breed’s coat can be short or long, but double in both cases. The coat has a white base color, accompanied by red markings on the face, back and flanks.. Although less frequent, some specimens of San Bernardo also have a pure reddish coat or a brindle combination.

The San Bernardo is a friendly and affectionate dog, it gets along well with its owners and other pets. In addition, it plays an excellent role as a home guardian, thanks to its protective personality. It is common to remain alert in front of unknown people, but rarely attacks if unprovoked.

Differences between Mastín and San Bernardo

As you will see, there are many physical and character similarities that these races share. Have you come across any, but have not known how to distinguish them? Do not worry! The following list of features will help you find the differences between the Spanish Mastiff and San Bernardo: