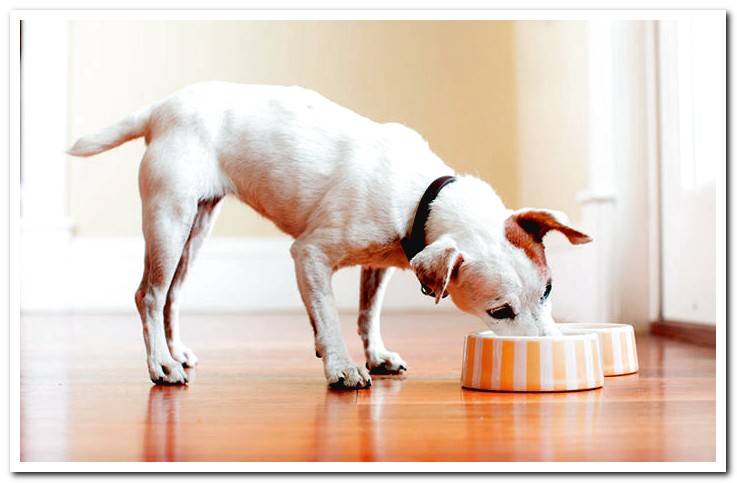 Humans are also omnivores and although we treat our dog like another member of the family, it is very important that we do not make the mistake of thinking that it can eat everything we eat.

There are certain foods that are part of our regular diet and yet for our dog they are indigestible and can even become toxic.

Digestion is the organic process by which food is broken down (hydrolyzed) into smaller particles called nutrients, which are assimilated and used by the body to maintain different body structures and obtain energy.

The digestion process begins in the mouth with chewing and ends in the dog’s large intestine, with the formation of feces.

Although most of the food that humans eat could be part of a dog’s diet, we must understand that there are anatomical differences between the two species and that body processes are not the same.

Digestion in the dog is different from that of humans, and this means that we cannot eat exactly the same foods.

How does a dog digest food?

Food is ingested by dogs and runs through the different organs that make up the digestive system: esophagus, stomach, small intestine and large intestine.

Other organs such as the pancreas and liver intervene in the digestive process, since they produce substances (enzymes and juices) necessary for the transformation of food into nutrients. 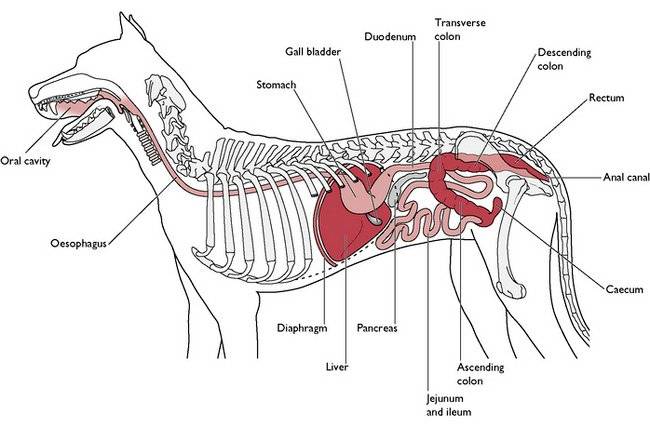 The dental structure of dogs is a reflection of their origins: wolves. Its teeth are designed to feed on natural resources, with large canines to bite and tear meat and bones.

Unlike adult humans, who have 32 teeth, adult dogs have 42 teeth in total.

In humans, the process of food degradation begins in the mouth, since our saliva has an enzyme called amylase and chewing is complete. However, dogs do not have this enzyme in their saliva, and they swallow the food with little chewing. However, even though the dog’s chewing process is brief, enough saliva is generated to lubricate the food facilitating its swallowing and its passage through the esophagus.

After swallowing, the food advances through the esophagus thanks to the strong muscles it has, which allow it to push food into the stomach even when the animal eats from the ground (against gravity).

The digestive process of a dog really begins in the stomach, so they do not spend much time on chewing, they only break the food into small enough pieces to swallow them and get them to the place where the digestion takes place as quickly as possible. (stomach).

Substances are produced in the stomach that begin food degradation: enzymes (proteases) and gastric acid, capable of breaking down food into proteins and smaller amino acids that can be absorbed and used by the body.

The gastric acid in the stomach of dogs is much stronger than that of humans, so it does not matter that dogs eat large chunks of food, as they will be easily broken down by their action and may even soften bone material.

An enzyme called gastric lipase is also produced in the stomach to start digesting fats.

Digestion of food in the stomach gives rise to small particles and an important liquid component that pass to the small intestine, place where nutrients that have been extracted from food will be absorbed. These particles cross the digestive membrane and pass into the blood to reach different parts of the body.

Waste products that have not been absorbed in the small intestine continue their advance into the large intestine to be expelled from the body.

Any particle that has not been used by the body and absorbed in the small intestine passes through the large intestine, where excess water and electrolytes will be absorbed, resulting in the formation of stool. This is the final stage of the digestive process, which will end with the evacuation of digestive waste in the form of compact feces.

As you can see, despite the fact that dogs have been next to humans for many years, there are still differences between the two species at the digestive level and we must keep them in mind when feeding our pet so as not to put their health at risk.