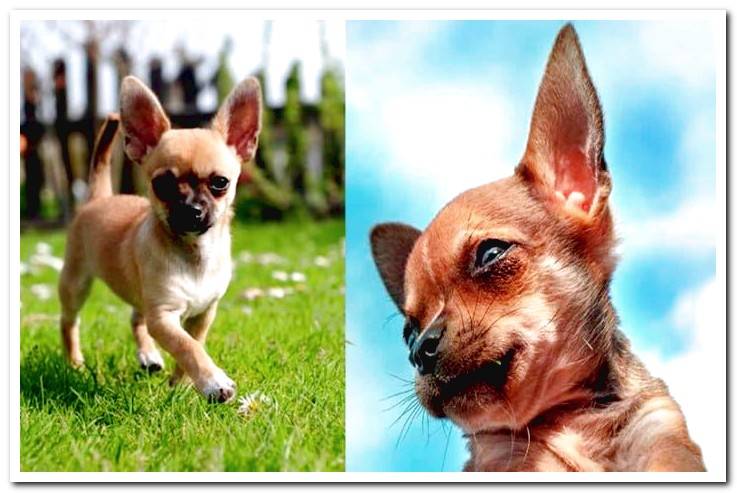 A native of Mexico, the Chihuahua is the smallest dog in the world. It was domesticated by the Toltec tribe, of which there are decorative objects where figures of this breed are shown. As you know, it is characterized by its small size, large ears and bulging eyes, but is there more than one type of Chihuahua?

In the breed it is possible to appreciate different types of coat, in terms of length and color, but also you will find variations in the shape of the head. With this in mind, we have prepared this article on the differences between deer-headed and apple-headed Chihuahua. Do you want to know everything about them? Let’s go there!

General characteristics of the Chihuahua

The Chihuahua is a small dog. Instead of taking measurements into account, international canine associations, such as the American Kennel Club (AKC) and the International Cynological Federation (FCI), consider weight as a guide to the breed standard. In this sense, dogs must weigh between 1 and 3 kilos.

They have a compact and slim body. The truffle is short and upturned, while the ears are long, pointed and large, similar to those of a desert fox. The Chihuahua’s eyes are very characteristic, as they are protuberant and round.

The breed’s coat can be long or short; in both cases, the texture is smooth and silky. The cloak appears in multiple colors, either alone or in combination of various shades.

The Chihuahua is a lively and energetic puppy, although its small size requires caution in allowing it to play with children and older dogs. He is usually restless and very confident, even protective and jealous with his masters and toys.

The standards of the AKC and the FCI, the two most recognized dog associations in the world, describe the head of the Chihuahua in apple shape. This means that, viewed from the front, the skull resembles an apple, because it has a round shape towards the muzzle, while the forehead bulges a little.

This description corresponds to the official breed standard, that is, those characteristics that associations consider the norm. However, as we well know, dogs don’t always conform to this rigorous standard, and there’s no problem with that.

The FCI considers the deer head as a “fault”, that is, a dog with these characteristics cannot be entered in competitions. Chihuahuas with this shape have the finest and most stylized heads, accompanied by a long neck, small eyes and a body a little more slender than the Chihuahua.

Despite this, if you have a deer or deer head dog, don’t worry, it is completely healthy and can live as happy as any other. There are other characteristics, such as weighing above the norm, that the aforementioned associations do not “accept” either, but this does not mean a problem for your pet. The rest of the characteristics, such as the coat, the personality and the life expectancy are the same of the breed.

In short, the differences between the apple-headed and deer Chihuahua are limited to the fact that some canine associations do not include the characteristics of the deer in their standards.

Are there other types of Chihuahua?

In addition to the aforementioned apple and deer head varieties, there are other types of Chihuahua. They are all small in size but are distinguished by fur varieties:

How to care for the apple and deer head Chihuahua?

The two varieties require similar care. Adequate nutrition for their age and physical activity, in addition to moderate exercise and the company of their masters.

Chihuahuas are characterized by their small size. As a result, it is necessary to be especially careful during the growth stage. Otherwise, they could get hurt going down and up stairs, jumping, or playing rough games with other dogs and children.