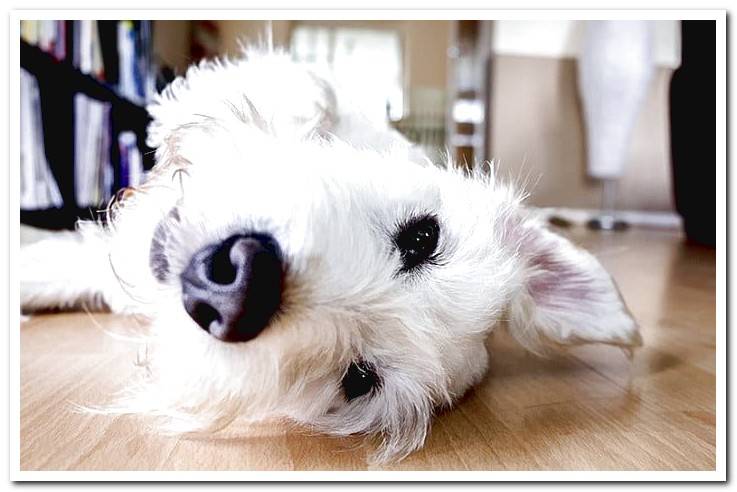 Dogs do curious things that often seem inexplicable. Among them, it is common to see that they shake the leg when scratching their belly, back or chest. Something that we find funny but also curious. Why do they move their feet by scratching them in the belly?

Contrary to what many believe, it is an involuntary reflection that they keep of their past as wild animals. Thanks to this reflex, the dog protects itself from parasites and other annoyances. Do you want to learn more about this curious behavior?

A little culture about body language

Dogs use their entire bodies to communicate with us. In addition to barking in different situations, they demonstrate discomfort, happiness, fear or aggressiveness through their ears, the position of the back and the movements of the tail.

Now, why does my dog ​​move his paw when I scratch his belly? What does he say with his body? Do dogs tickle? Actually, the reason is very simple.

Why do dogs move their paws when we scratch them?

The back, chest, ears and belly are places that provoke a reaction in our dog: the movement of the paw.

Dogs do this because of scratch reflex, known in English as scratch reflex. This reflex is involuntary, that is, our dog he does it inadvertently and can’t help it.

When feeling a stimulus in any of these areas, the brain sends the reflex signal to the leg, causing the movement that is so funny to us. Commonly known as “starting the motorcycle”, for its resemblance to a human starting a motorcycle with a pedal.

Why is there a scratch reflex?

In the wild, dogs face different stimuli. Some do not pose a problem to them, such as rubbing leaves or branches, but others can bring them disease or discomfort, as in the case of external parasites and other insects.

When any of these animals or plant elements touch the dog in the mentioned areas, the body experiences itching or tickling. Thanks to this, the brain detects that there is something strange attached to the body and sends an order to try to eliminate it, by means of the movement of the leg.

With this, the dog should shake or scratch the affected area to get rid of the little intruder.

If I scratch my dog’s chest, does it bother him?

Dogs move their paws involuntarily, so we should ask ourselves: does it bother them that we provoke the scratching reflex?

It is easy to see if our dog is uncomfortable: he runs away, complains, takes small bites, folds his ears, among other signs. It is inevitable that the endings of your body send signals if those areas receive a stimulus, so we must see that it is comfortable.

If my dog ​​paws when I scratch him and is happy, there is nothing to worry about. We can vary this caress with other areas, so as not to tire it and avoid discomfort.

Where to scratch the dog?

Respecting our dog is a way of loving him. If he is uncomfortable when we scratch his belly, chest and back, it is better that we look for other areas to pamper him.

Instead of scratching it, we can caress gently on its back. Gently run your hands under your chin and around your ears it will also help you relax.

The armpits and the base of the tail can be gently caressed. We better avoid slapping, tickling and squeezing They are not dog friendly.

Almost all dogs are defensive when petted on the paws. You should gently touch them a little and observe their reaction. If you remain calm, we will continue to alternate caresses in other areas of the body.

With the passage of time and paying attention, we will discover which are your favorite areas to receive pampering.

The scratch reflex may appear when we stimulate the areas, but it also appears to fulfill its primary function.

A dog that doesn’t stop moving its foot and scratches frequently, It could have fleas, ticks, or other external parasites. We should check the fur for these pesky visitors. Additionally, scabies also produces constant scratching, so a visit to the vet could determine the reason for this behavior.